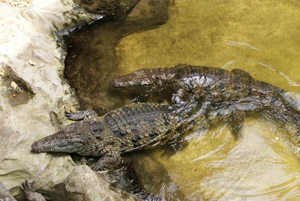 The fears connected with shark attacks are stronger in the world today than those related to much more dangerous predators – crocodiles. However, crocodiles pose a greater threat to humans than sharks do.

A crocodile snatched Hendrik Coetzee, a South African guide, 35, from his kayak while he led an American expedition into the heart of Congo last week. Two American tourists could only watch the scene in horror as the guide was killed and eaten by the predator. They paddled to safety unharmed. Coetzee’s body has not been recovered.

Stories about croc attacks are just as terrible as they are hopeless. Experts say that it is possible to stay to fight off a shark, but it is much more difficult or even impossible to rescue themselves from an attacking croc.

Sharks kill or mail up to 15 people every year. Hippos kill 200, elephants kill 250, bees – 1,250, whereas crocodiles kill 2,500 people every year. The stats make crocodiles 168 times more dangerous than sharks. The ultimate killer is the mosquito. They spread malaria – the disease that kills up to 2 million humans every year.

As for the crocs, here is just a short list of recent incidents.

A small African plane flying from Congo’s Kinshansa to Bandundu crashed in the African country at the end of August. Twenty people were killed in the crash, including the airline’s owner and pilot, 62-year-old Belgian Daniel Philemotte. The crash left only one survivor, who later unveiled the reason of the tragic incident. As it turned out, one of the passengers was carrying a crocodile in a duffle bag to sell the reptile afterwards. The crocodile escaped from the bag during the flight, and other passengers started panicking. The reptile scared the stewardess, and she ran towards the cockpit. Other passengers ran after her. As a result, the plane lost its balance and started falling. The aircraft crashed into a residential building, in which no one was staying at the moment of the tragedy.

In Ukraine, a croc attacked and mauled a three-year-old child in the theater of marine animals and dolphins Akvatoria, in Ukraine’s Yalta. The child was holidaying in the city with his parents; the family came to Ukraine from Brest, Belarus. The child suffered numerous injuries and lost several fingers in the attack.

Lauren Failla, a 25-year-old US citizen, disappeared when snorkeling at an Indian resort in May 2010. Her disfigured remains were recovered two days later. Local authorities confirmed that the young woman had been killed in a croc attack.

A salt-water crocodile mauled a 36-year-old man in Australia in July 2010. The man was drunk when he climbed into the reptile’s enclosure and attempted to ride the predator. The huge 16ft-long crocodile bit the man’s leg, tearing chunks of flesh from him. The man survived the attack.

A crocodile attacked an American tourist in Mexico’s Cancun in September 2009 as he was urinating into a lagoon. The young man was hospitalized with multiple bite wounds of his leg and neck. The man was also left with a head injury after the reptile knocked him down to the ground.

In Angola, at least nine children were killed by crocodiles within just several days in the spring of 2009. According to Angola’s national radio, the victims were aged from ten to sixteen. They were killed as they approached the river Keve to collect water.