Couch Potatoes May Be Genetically Predisposed to Being Lazy, MU Study Finds

COLUMBIA, Mo. — Studies show 97 percent of American adults get less than 30 minutes of exercise a day, which is the minimum recommended amount based on federal guidelines. New research from the University of Missouri suggests certain genetic traits may predispose people to being more or less motivated to exercise and remain active. Frank Booth, a professor in the MU College of Veterinary Medicine, along with his post-doctoral fellow Michael Roberts, were able to selectively breed rats that exhibited traits of either extreme activity or extreme laziness. They say these rats indicate that genetics could play a role in exercise motivation, even in humans.

“We have shown that it is possible to be genetically predisposed to being lazy,” Booth said. “This could be an important step in identifying additional causes for obesity in humans, especially considering dramatic increases in childhood obesity in the United States. It would be very useful to know if a person is genetically predisposed to having a lack of motivation to exercise, because that could potentially make them more likely to grow obese.”

In their study published in the American Journal of Physiology: Regulatory, Integrative and Comparative Physiology on April 3, 2013, Roberts and Booth put rats in cages with running wheels and measured how much each rat willingly ran on their wheels during a six-day period. They then bred the top 26 runners with each other and bred the 26 rats that ran the least with each other. They repeated this process through 10 generations and found that the line of running rats chose to run 10 times more than the line of “lazy” rats. 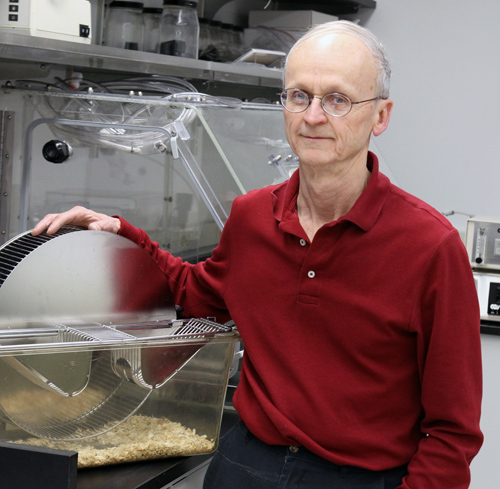 Frank Booth is a professor in the MU College of Veterinary Medicine and the MU School of Medicine. Booth, an expert on the effects of a sedentary lifestyle, stands with an exercise wheel in his lab.

Once the researchers created their “super runner” and “couch potato” rats, they studied the levels of mitochondria in muscle cells, compared body composition and conducted thorough genetic evaluations through RNA deep sequencing of each rat.

“While we found minor differences in the body composition and levels of mitochondria in muscle cells of the rats, the most important thing we identified were the genetic differences between the two lines of rats,” Roberts said. “Out of more than 17,000 different genes in one part of the brain, we identified 36 genes that may play a role in predisposition to physical activity motivation.”

Now that the researchers have identified these specific genes, they plan on continuing their research to explore the effects each gene has on motivation to exercise.

Frank Booth also is a professor in the Department of Physiology in the MU School of Medicine as well as a research investigator in the Dalton Cardiovascular Research Center at MU. This research also featured Kevin Wells, an assistant professor of genetics in the College of Agriculture, Food and Natural Resources Division of Animal Sciences.

As a result of years of excellence in providing systematic, periodic examinations of scholarly research and provoking discussion leading to new research activity, Frank Booth will be awarded the American Physiological Society (APS) 2013 Annual Reviews Award for Scientific Reviewing. The award recognizes an APS member who has written scientific reviews that have helped provide an enhanced understanding of the area of physiology reviewed.