UCLA researchers capture wasted heat, use it to power devices

Imagine how much you could save on your electricity bill if you could use the excess heat your computer generates to actually power the machine.

Researchers at the UCLA Henry Samueli School of Engineering and Applied Science have taken an important step toward harnessing that heat and converting it for practical use. The advance could lead to more energy-efficient appliances and information processing devices.

The research team, led by Kang Wang, UCLA’s Raytheon Professor of Electrical Engineering, demonstrates how to add power to a spintronics device, which uses the spin of electrons for energy rather than their charge.

Excess heat, like that generated by extended use of a computer or other device, naturally creates what is known as a spin wave that can move a domain wall. A domain wall separates magnetic materials that point in different directions in certain magnetic devices.

If housed within the central processing unit of a computer or other electrical device, a domain wall would serve as a sort of turbine, capturing the heat from the traveling spin wave and converting it into energy, just as a turbine harnesses the power of water and converts it into electrical energy that can be used to redirect the water or serve another purpose. The captured energy can then be used to help power the electrical device.

The concept of using heat energy to move magnetic domain walls is not new, according to researchers, but this paper is the first demonstration of moving a domain wall through propagation of a spin wave. 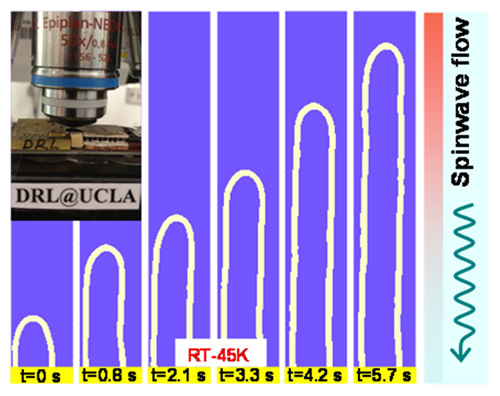 UCLA researchers have demonstrated the use of spin wave flow to move the domain wall in a magnetic device, allowing the harvest of wasted energy. Image courtesy of UCLA and Physical Review Letters

Researchers said the capture of heat energy can serve to supplement the power provided by traditional CMOS (complementary metal-oxide semiconductor) circuits in devices from smartphones to computer servers and large electrical equipment. In the long run, the process may serve as an alternative to CMOS circuits in many devices.

Researchers received financial support from the Western Institute of Nanoelectronics (WIN) and the Center for Functional Engineered Nano Architectonics (FENA) at UCLA, which are sponsored by the Defense Advanced Research Projects Agency, the Semiconductor Industry Consortium and the National Institute of Standards and Technology.

The research was published online in the peer-reviewed journal Physical Review Letters on (https://prl.aps.org/pdf/PRL/v110/i17/e177202) and will appear in an upcoming print edition of the journal.

– By Matthew Chin and Bill Kisliuk