But how do you define greed? Are compassionate CEOs better for business? How do you know if the leader is doing more harm than good? And can anybody rein in the I-Me-Mine type leader anyway? 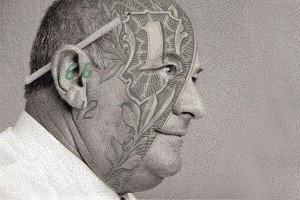 CEO greed is the topic of studies by UD’s Katalin Takacs Haynes and collaborators from Texas A&M University and the University of Cincinnati. Illustration by Jeffrey Chase

University of Delaware researcher Katalin Takacs Haynes and three collaborators – Michael A. Hitt and Matthew Josefy of Texas A&M University and Joanna Tochman Campbell of the University of Cincinnati – have chased such questions for several years, digging into annual reports, comparing credentials with claims and developing useful definitions that could shed more light on the impact of a company’s top leader on employees, business partners and investors.

They test the assumption that self-interest is a universal trait of CEOs (spoiler alert: it’s alive and well), show that too much altruism can harm company performance, reveal the dark, self-destructive tendencies of some entrepreneurs and family-owned businesses and provide a way to measure and correlate greed, arrogance and company performance.

“We tried to look at what we think greed is more objectively,” said Haynes, who was recently promoted to associate professor of management in UD’s Alfred Lerner College of Business and Economics. “What we’re trying to do is clean up some of the definitions and make sure we’re all talking about the same concepts.”

In their studies, researchers offer plenty of evidence that some leaders are insatiable when it comes to compensation. How much is too much? They don’t put a number on that. But they do add plenty of nuance to the question and point to a mix of motivations that goes beyond raw greed. 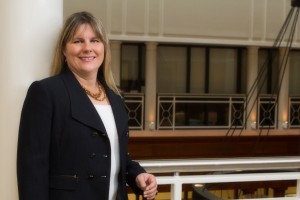 “It’s not for us to judge what too much is for anybody else,” said Haynes, “but we can see when the outcome of somebody’s work is the greater good, and when it is not just greed that is operating in them.”

Greed seems all too apparent to many workers. The recent recession left millions without jobs and many companies sinking into a sea of red. At the same time, though, stunning bonuses and other perks were landing in the laps of people at the helm.

Haynes, who joined the UD faculty in 2011, has found the range of pay within companies an intriguing question, too.

“Why is it that in some companies there is a huge difference between the pay of the top executive and the average worker or the lowest-paid employee and in other companies the pay is a lot closer?” she said.

Many a minimum-wage worker, making $15,080 per year, has wondered that, and so have those in the middle class, who may work a year to make what some CEOs make in a day.

But if you make more than anyone else does that mean you’re greedy?

The question is more complicated than water-cooler conversations might suggest. And Haynes and her collaborators go to the data for answers, leaving emotion, indignation and cries for justice to others. They leave others to correlate the data with names, too.

Instead, they offer definitions and analytical tools that add clarity, allow for apples-to-apples comparisons and shed new light on how a leader’s objectives shape company performance.

“It’s possible that high pay is perfectly deserved because of high contributions, high skill sets,” Haynes said, “and just because somebody doesn’t have high pay doesn’t mean they aren’t greedy.”

The marks of greed are found elsewhere – in a reporting category that tracks “other” compensation and perquisites, in the pay rates of other top executives, in compensation demands during times of company stress, for example.

The studies also examined managerial hubris and how it differs from self-confidence.

“Hubris is an extreme manifestation of confidence, characterized by preoccupation with fantasies of success and power, excessive feelings of self-importance, as well as arrogance,” researchers wrote.

“Say I’m a stunt driver and I have jumped across five burning cars before with my car,” Haynes said. “I’m pretty confident I can do that – and maybe even six. Say I’m not a stunt driver. To say I could jump through six burning cars would be arrogance. And if I drag you to go with me, it could be criminal.”

Risk aversion can harm a company. But risk for short-term gain without thought of the company’s future is a sign of greed.

“Some CEOs take risks and it will pay off,” she said. “They will have reliable performance and we can forecast that. We know their track record. Others take foolish risks not based on their previous performance.”

Such risks may be especially prevalent among young entrepreneurs, who underestimate the resources needed to help a startup succeed and fail to recognize that more than money is at stake.

“While financial capital is an important concern with these behaviors, the effects on human and social capital are often overlooked, despite the fact that they are highly critical for the success and ultimate survival of entrepreneurial ventures,” the researchers wrote.

Generally, researchers found that greed is worse among short-term leaders with weak boards.

The good news, Haynes said, is that strong corporate governance can rein in CEO greed and keep both self-interest and altruism in proper balance. And that is where the greatest success is found.

“Overall, we conclude that measured self-interest keeps managers focused on the firm’s goals and measured altruism helps the firm to build and maintain strong human and social capital,” researchers wrote.