Coronavirus is hitting larger cities harder. How should they respond?

Cities are vibrant centers of modern life, tied together by dense and diverse networks of socioeconomic interactions. But the sorts of connections that foster creativity and innovation in cities now threaten to spread the novel coronavirus. 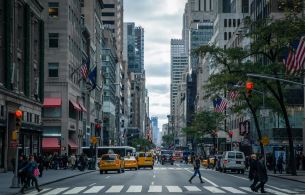 But these numbers only represent part of the story of the pandemic, said Prof. Luis Bettencourt, a leading researcher in urban science and ecology and evolution. Although large cities are dealing with faster growing outbreaks, they may also have the socioeconomic institutions and infrastructure to respond more aggressively—both by enforcing social distancing measures and expanding the capacity of their health care systems.

“You can see large cities being hit first and faster, and then stepping up their responses,” said Bettencourt, who directs the Mansueto Institute for Urban Innovation at UChicago. “If their response matches the challenge, then they have a chance to go through this first surge faster, and also to be better prepared for the future.

“But if it’s not, even a place that doesn’t currently have the worst problem may soon be overwhelmed.”

The new preprint paper examines data on more than 200 U.S. metropolitan areas from March 13 to 24. Bettencourt co-authored the paper with Marc Berman, a UChicago neuroscientist and psychologist who leads the Environmental Neuroscience Lab. The first author was UChicago doctoral student Andrew Stier, AB’16.

The researchers aggregated county-level data from that timeframe to the city level, subtracting total deaths to approximate the number of early active cases. They estimated some of the highest growth rates in the New York-Newark-New Jersey area (roughly 50% per day), the Chicagoland area (43%), the greater Los Angeles area (28%) and the Seattle area (15%).

“The denser the city, the more easily disease can spread,” said Berman, an associate professor in UChicago’s Department of Psychology. “It’s intuitive, but we put numbers behind it. This evidence is important from a public policy standpoint, because you have some politicians really not taking some of these things sufficiently seriously.

“It says here in the data: If you are in larger cities, you definitely have to be more careful, you have to act faster and you have to engage in more intense social distancing.”

Added Stier: “At the same time, it is important to try and preserve social networks as much as possible, possibly through technology. Rich, intense and diverse social networks are part of what make cities so great.”

The new research also suggests that when the largest COVID-19 outbreaks have been contained, smaller cities may be able to return to normal life and economic activity faster than their larger counterparts. But even that remains uncertain, given the disparity in responses from city to city and the potential for transmission between cities.

The more concrete takeaway for Bettencourt is that the “path to normality will be place-specific, depending on the initial density of ties that can transmit the disease, and on the speed and effectiveness of the response.” That is, the effects of the pandemic will vary on a local level, even for a virus that has left few areas of the world untouched.

He is currently examining data that might reveal the ongoing effectiveness of countermeasures, both in cities across the United States and in other parts of the world.

“It’s not a monolithic problem,” Bettencourt said. “The attack rate is worse in some areas, but the capacity to respond may also be stronger in different places. Where these two factors match, or don’t match, is where we’ll find both solutions and the greatest challenges.”