“Cool it!” That’s a prime directive for microprocessor chips and a promising new solution to meeting this imperative is in the offing. Researchers with the U.S. Department of Energy (DOE)’s Lawrence Berkeley National Laboratory (Berkeley Lab) have developed a “process friendly” technique that would enable the cooling of microprocessor chips through carbon nanotubes.

Frank Ogletree, a physicist with Berkeley Lab’s Materials Sciences Division, led a study in which organic molecules were used to form strong covalent bonds between carbon nanotubes and metal surfaces. This improved by six-fold the flow of heat from the metal to the carbon nanotubes, paving the way for faster, more efficient cooling of computer chips. The technique is done through gas vapor or liquid chemistry at low temperatures, making it suitable for the manufacturing of computer chips. 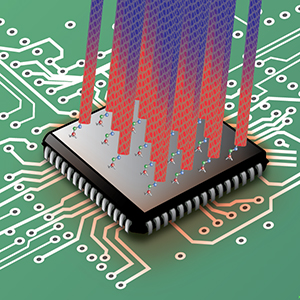 Cooling microprocessor chips through the combination of carbon nanotubes and organic molecules as bonding agents is a promising technique for maintaining the performance levels of densely packed, high-speed transistors in the future. Image credit: Berkeley Lab

“We’ve developed covalent bond pathways that work for oxide-forming metals, such as aluminum and silicon, and for more noble metals, such as gold and copper,” says Ogletree, who serves as a staff engineer for the Imaging Facility at the Molecular Foundry, a DOE nanoscience center hosted by Berkeley Lab. “In both cases the mechanical adhesion improved so that surface bonds were strong enough to pull a carbon nanotube array off of its growth substrate and significantly improve the transport of heat across the interface.”

Overheating is the bane of microprocessors. As transistors heat up, their performance can deteriorate to the point where they no longer function as transistors. With microprocessor chips becoming more densely packed and processing speeds continuing to increase, the overheating problem looms ever larger. The first challenge is to conduct heat out of the chip and onto the circuit board where fans and other techniques can be used for cooling. Carbon nanotubes have demonstrated exceptionally high thermal conductivity but their use for cooling microprocessor chips and other devices has been hampered by high thermal interface resistances in nanostructured systems. 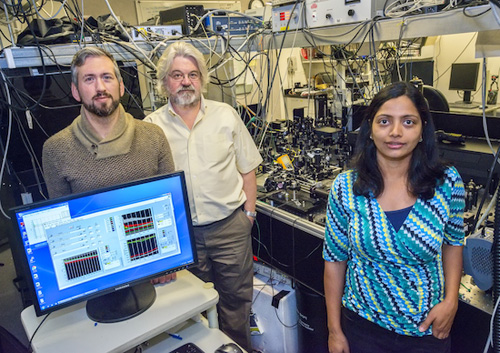 From left, Brett Helms, Frank Ogletree and Sumanjeet Kaur at the Molecular Foundry used organic molecules to form strong covalent bonds between carbon nanotubes and metal surfaces, improving by six-fold the flow of heat from the metal to the carbon nanotubes. (Photo by Roy Kaltschmidt)

“The thermal conductivity of carbon nanotubes exceeds that of diamond or any other natural material but because carbon nanotubes are so chemically stable, their chemical interactions with most other materials are relatively weak, which makes for  high thermal interface resistance,” Ogletree says. “Intel came to the Molecular Foundry wanting to improve the performance of carbon nanotubes in devices. Working with Nachiket Raravikar and Ravi Prasher, who were both Intel engineers when the project was initiated, we were able to increase and strengthen the contact between carbon nanotubes and the surfaces of other materials. This reduces thermal resistance and substantially improves heat transport efficiency.”

Sumanjeet Kaur, lead author of the Nature Communications paper and an expert on carbon nanotubes, with assistance from co-author and Molecular Foundry chemist Brett Helms, used reactive molecules to bridge the carbon nanotube/metal interface – aminopropyl-trialkoxy-silane (APS) for oxide-forming metals, and cysteamine for noble metals. First vertically aligned carbon nanotube arrays were grown on silicon wafers, and thin films of aluminum or gold were evaporated on glass microscope cover slips. The metal films were then “functionalized” and allowed to bond with the carbon nanotube arrays. Enhanced heat flow was confirmed using a characterization technique developed by Ogletree that allows for interface-specific measurements of heat transport.

Although the approach used by Ogletree, Kaur and their colleagues substantially strengthened the contact between a metal and individual carbon nanotubes within an array, a majority of the nanotubes within the array may still fail to connect with the metal. The Berkeley team is now developing a way to improve the density of carbon nanotube/metal contacts. Their technique should also be applicable to single and multi-layer graphene devices, which face the same cooling issues.

“Part of our mission at the Molecular Foundry is to help develop solutions for technology problems posed to us by industrial users that also raise fundamental science questions,” Ogletree says. “In developing this technique to address a real-world technology problem, we also created tools that yield new information on fundamental chemistry.”

This work was supported by the DOE Office of Science and the Intel Corporation.