Patricia Ebrey is a UW professor of history and the author of a number of books about Chinese history and culture. She answered a few questions about her new book, “Emperor Huizong,” about the Chinese emperor who lived from 1082 to 1135 and ruled for 26 years during China’s Song Dynasty.

Q: Would you describe the book?

A: “Emperor Huizong”is organized into four parts. The first part traces his orphaned childhood, his accession to the throne at age 17 and the men he worked with during his first three years as emperor as he learned how to perform the rituals and customs of his role.

The second part looks at cultural initiatives during Huizong’s first decade on the throne, when he patronized physicians, painters, builders and Daoist priests; sponsored reform of court music; and crafted an image of himself as a talented poet, painter and calligrapher. 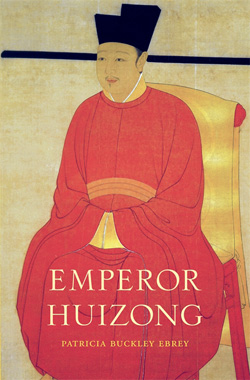 The third part considers some ambitious projects Huizong undertook during his second decade such as building palaces, temples and gardens. It also examines his relationship with his councilors and many consorts, who bore him 65 children. It ends with an analysis of how Huizong came to abandon the negotiated peace with Song’s northern neighbor, the state of Liao, and form an alliance with Liao’s enemy the Jurchen Jin.

The final part tells the tragic story of what resulted from that decision, including the siege of the Songcapital by the Jurchens, its looting, and the captivity of Huizong and thousands of others from his court and clan.

My take on Huizong is not at all the traditional one. Since Huizong’s reign ended badly, Chinese historians assume he must have been a bad emperor. I look at Huizong sympathetically, trying to put his actions in the context of his time and place. In this I am closer to the Western tradition of rulers’ biographies, which places more weight on the human side of rulers.

Q: You write, “The drama of Huizong’s life owes much to the large role that chance played in it.”  Would you explain?

A: No one could have predicted either of the two biggest life-changing events in Huizong’s life — his ascension to the throne in 1100 and his capture by the Jurchens a quarter-century later. Huizong would not have become emperor if his elder brother had lived to see a son born or adopted. Later, if the Jurchen uprising had been suppressed by Liao, Huizong could well have reigned another decade or more.

Indeed, had Huizong moved the court when he first heard news of the Jurchen invasion, as some advised, he might well have escaped captivity. These chance events give Huizong’s story a lot of dramatic appeal.

Q: As you note, Huizong never wrote a memoir, “nor did any historian of his own day or even later dynasties chronicle his life.” How did you go about your research?

A: I pieced together evidence from many different kinds of sources, from the reports and petitions submitted to him to things he wrote himself — edicts, poetry, prefaces to books he commissioned, commentaries on Daoist classics, and so on.

Anecdotal literature was also invaluable. Many of the most interesting incidents were recorded in the 12th century in miscellanies full of gossip. I tried to exclude records most likely to be based on groundless rumors, but I did not reject this sort of material out of hand.

Q: Finally, how do you hope this biography might change history’s view of Emperor Huizong?

A: Most who have heard of Huizong know him as a ruler talented at painting and calligraphy but inept at selecting advisers and overly self-indulgent. Chinese historians have traditionally assessed Huizong’s reign with its end in mind; since Huizong’s government came to a bad end, he must have been at fault. I hope my book will convince people that it is time to set aside that way of thinking.

Performing the role of emperor was immensely complicated. Huizong was not a negligent ruler — he did not refuse to meet his officials or read their reports — but was in fact rather diligent. He had access to enormous resources but the constraints on him were also very real. He could not even travel around the country to check on the state of his armies.

Let me add, though, that I did not write this book only for people who have already heard of Huizong. I think that viewing the world from one person’s perspective is an excellent way to get into an age and a place. To draw in readers relatively unfamiliar with Song China, I provide background on everything from political factionalism to poetry as an element of court culture.

By the time they have finished the book, readers will know a lot more not only about Huizong but also about China in the 11th and 12th centuries.