Our Sun may seem pretty impressive: 330,000 times as massive as Earth, it accounts for 99.86 percent of the Solar System’s total mass; it generates about 400 trillion trillion watts of power; and it has a surface temperature of about 10,000 degrees Fahrenheit. Yet for a star, it’s a lightweight.

The real cosmic behemoths are Wolf-Rayet stars, which are more than 20 times as massive as the Sun and at least five times as hot. Because these stars are relatively rare and often obscured, scientists don’t know much about how they form, live and die. But this is changing, thanks to an innovative sky survey called the intermediate Palomar Transient Factory (iPTF), which uses resources at the National Energy Research Scientific Computing Center (NERSC) and Energy Sciences Network (ESnet), both located at the U.S. Department of Energy’s Lawrence Berkeley National Laboratory (Berkeley Lab), to expose fleeting cosmic events such as supernovae. 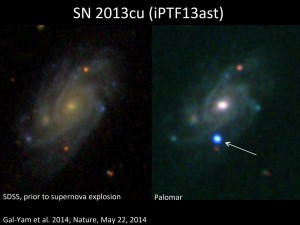 A star in a distant galaxy explodes as a supernova: while observing a galaxy known as UGC 9379 (left; image from the Sloan Digital Sky Survey; SDSS) located about 360 million light years away from Earth, the team discovered a new source of bright blue light (right, marked with an arrow; image from the 60-inch robotic telescope at Palomar Observatory). This very hot, young supernova marked the explosive death of a massive star in that distant galaxy. Image credit: Berkeley Lab (Click image to enlarge)

For the first time ever, scientists have direct confirmation that a Wolf-Rayet star—sitting 360 million light years away in the Bootes constellation—died in a violent explosion known as a Type IIb supernova. Using the iPTF pipeline, researchers at Israel’s Weizmann Institute of Science led by Avishay Gal-Yam caught supernova SN 2013cu within hours of its explosion. They then triggered ground- and space-based telescopes to observe the event approximately 5.7 hours and 15 hours after it self-destructed. These observations are providing valuable insights into the life and death of the progenitor Wolf-Rayet.

“Newly developed observational capabilities now enable us to study exploding stars in ways we could only dream of before. We are moving towards real-time studies of supernovae,” says Gal-Yam, an astrophysicist in the Weizmann Institute’s Department of Particle Physics and Astrophysics. He is also the lead author of a recently published Nature paper on this finding.
“This is the smoking gun. For the first time, we can directly point to an observation and say that this type of Wolf-Rayet star leads to this kind of Type IIb supernova,” says Peter Nugent, who heads Berkeley Lab’s Computational Cosmology Center (C3) and leads the Berkeley contingent of the iPTF collaboration.

“When I identified the first example of a Type IIb supernova in 1987, I dreamed that someday we would have direct evidence of what kind of star exploded. It’s refreshing that we can now say that Wolf-Rayet stars are responsible, at least in some cases,” says Alex Filippenko, Professor of Astronomy at UC Berkeley. Both Filippenko and Nugent are also co-authors on the Nature paper. 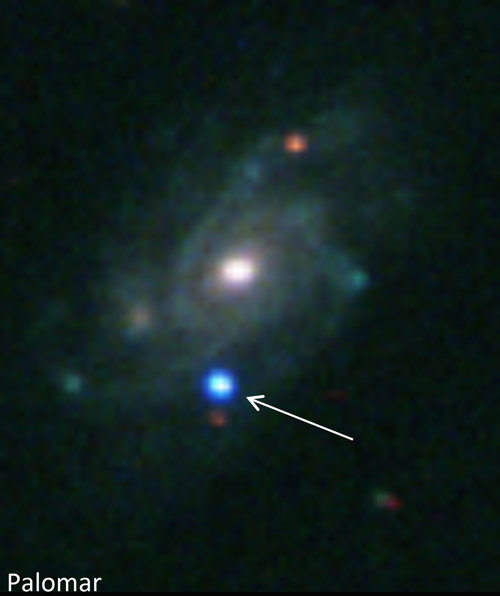 A detailed study of the spectrum (the distribution of colors composing the light from the supernova) using a technique called “flash spectroscopy” revealed the signature of a wind blown by the aging star just prior to its terminal explosion, and allowed scientists to determine what elements were abundant on the surface of the dying star as it was about to explode as a supernova, providing important information about how massive stars evolve just prior to their death, and the origin of crucial elements such as carbon, nitrogen and oxygen. Image credit: Berkeley Lab

Elusive Signatures Illuminated in a Flash of Light

Some supermassive stars become Wolf-Rayets in the final stages of their lives. Scientists find these stars interesting because they enrich galaxies with the heavy chemical elements that eventually become the building blocks for planets and life.

“We are gradually determining which kinds of stars explode, and why, and what kinds of elements they produce,” says Filippenko. “These elements are crucial to the existence of life. In a very real sense, we are figuring out our own stellar origins.”

All stars—no matter what size—spend their lives fusing hydrogen atoms to create helium. The more massive a star, the more gravity it wields, which accelerates fusion in the star’s core, generating energy to counteract gravitational collapse. When hydrogen is depleted, a supermassive star continues to fuse even heavier elements like carbon, oxygen, neon, sodium, magnesium and so on, until its core turns to iron. At this point, atoms (even subatomic particles) are packed in so closely that fusion no longer releases energy into the star. It is now solely supported by electron degeneracy pressure—the quantum mechanical law that prohibits two electrons from occupying the same quantum state. 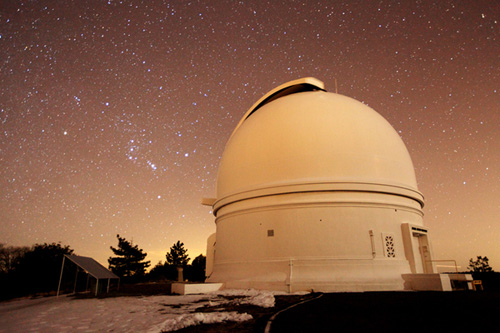 When the core is massive enough, even electron degeneracy won’t support the star and it collapses. Protons and electrons in the core merge, releasing a tremendous amount of energy and neutrinos. This, in turn, powers a shockwave that tears through the star ejecting its remains violently into space as it goes supernova.

The Wolf-Rayet phase occurs before the supernova. As nuclear fusion slows, the heavy elements forged in the star’s core rise to the surface setting off powerful winds. These winds shed a tremendous amount of material into space and obscure the star from prying telescopes on Earth.

“When a Wolf-Rayet star goes supernova, the explosion typically overtakes the stellar wind and all information about the progenitor star is gone,” says Nugent. “We got lucky with SN 2013cu—we caught the supernova before it overtook the wind. Shortly after the star exploded, it let out an ultraviolet flash from the shock wave that heated and lit up the wind. The conditions that we observed in this moment were very similar to what was there before the supernova.”

Before the supernova debris overtook the wind, the iPTF team managed to capture its chemical light signatures (or spectra) with the ground-based Keck telescope in Hawaii and saw the telltale signs of a Wolf-Rayet star. When the iPTF team performed follow-up observations 15 hours later with NASA’s Swift satellite, the supernova was still quite hot and strongly emitting in the ultraviolet. In the following days, iPTF collaborators rallied telescopes around the globe to watch the supernova crash into material that had been previously ejected from the star. As the days went by, the researchers were able to classify SN 2013cu as a Type IIb supernova because of the weak hydrogen signatures and strong helium features in the spectra that appeared after the supernova cooled.

“With a series of observations, including data I took with the Keck-I telescope 6.5 days after the explosion, we could see that the supernova’s expanding debris quickly overtook the flash-ionized wind that had revealed the Wolf-Rayet features. So, catching the supernova sufficiently early is hard—you’ve got to be on the ball, as our team was,” says Filippenko.

“This discovery was totally shocking, it opens up a whole new research area for us,” says Nugent. “With our largest telescopes you might have a chance of getting a spectrum of a Wolf-Rayet star in the nearest galaxies to our Milky Way, perhaps 4 million light years away. SN 2013cu is 360 million light years away—further by almost factor of 100.”

And because the researchers caught the supernova early—when the ultraviolet flash lit up the progenitor’s stellar wind—they were able to take several spectra. “Ideally, we’d like to do this again and again and develop some interesting statistics, not just for supernovae with Wolf-Rayet progenitors but other types as well,” says Nugent.

Since February 2014, the iPTF survey has been scanning the sky nightly with a robotic telescope mounted on the 48-inch Samuel Oschin Telescope at Palomar Observatory in Southern California. As soon as observations are taken, the data travel more than 400 miles to NERSC in Oakland via the National Science Foundation’s High Performance Wireless Research and Education Network and the Department of Energy’s ESnet. At NERSC, the Real-Time Transient Detection Pipeline sifts through the data, identifies events to follow up on and sends an alert to iPTF scientists around the globe.

The survey was built on the legacy of the Palomar Transient Factory (PTF), designed in 2008 to systematically chart the transient sky by using the same camera at Palomar Observatory. Last year Nugent and colleagues at Caltech and UC Berkeley made significant modifications to the transient detection pipeline for the iPTF project. Working with NERSC staff, Nugent upgraded the pipeline’s computing and storage hardware. The iPTF team also made improvements to the machine learning algorithms at the heart of the detection pipeline and incorporated the Sloan Digital Star Survey III star and galaxy catalogs so the pipeline could immediately reject known variable stars.

They even added an asteroid rejection feature to the automated workflow, which calculates the orbit of every known asteroid at the beginning of the night, determines where the asteroids are in an individual image, and then rejects them.

“All of our modifications significantly sped up our real-time transient detection; we now send high quality supernova alerts to astronomers all around the globe in less than 40 minutes after taking an image at Palomar,” says Nugent. “In the case of SN 2013cu, that made all the difference.”