Computer Viruses Could Take a Lesson from Showy Peacocks

EAST LANSING, Mich. — Computer viruses are constantly replicating throughout computer networks and wreaking havoc. But what if they had to find mates in order to reproduce?

In the current issue of Evolution, Michigan State University researchers created the digital equivalent of spring break to see how mate attraction played out through computer programs, said Chris Chandler, MSU postdoctoral researcher at MSU’s BEACON Center for the Study of Evolution in Action.

“This is actually a big question that still generates a lot of debate,” said Chandler, who co-authored the study with Ian Dworkin, assistant professor of zoology, and Charles Ofria, associate professor of computer science and engineering. “People have some good ideas, but they can be hard to test really well in nature, so we decided to take a different approach.”

The novel approach involved creating promiscuous programs in a virtual world called Avida, a software environment in which specialized computer programs compete and reproduce. Because mutations happen when Avidians copy themselves, which lead to differences in reproductive rates, these digital organisms evolve, just like living things, added Ofria, who created Avida. 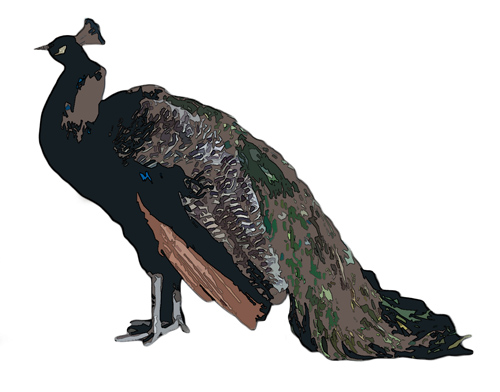 MSU researchers explore what would happen if computer viruses had to find mates in order to reproduce. Photo illustration by G.L. Kohuth

The researchers programed the Avidians with the ability to grow sexual displays – e-peacock tails of sorts. They also allowed them to choose mates randomly. As the researchers predicted, they usually went for the showiest mates. But why?

“One school of thought argues that the main benefit of choosing an attractive partner is that your offspring also will be sexy,” said Dworkin. “In the other camp are those who argue that these sexual ornaments are a sign of good health, and so choosing a showy mate ensures that you’ll get good genes to pass on to your offspring.”

Traditionally, biologists thought that ornamental displays clue in potential mates about an individual’s virility because the structures are costly, biologically speaking; only an animal in really good health could bear the burden they impose. So the researchers altered Avidians’ genetic code to allow them to grow exaggerated displays practically for free.

They expected this change to diminish the evolutionary benefits of preferring showy mates, since even the wimpiest of Avidians could now grow enormous digital tail feathers.

“I was surprised when we didn’t find that at all,” Chandler said. “Even when we eliminated the costs of these displays, they still evolved to be an indicator of a male’s genetic quality.”

MSU’s BEACON Center is funded by the National Science Foundation.