Back to the Future: A New Science for a Changing Planet

In a world that is changing on a global scale and faster than ever before, science should rediscover its roots of observing the natural world unimpeded by the strict protocols of experimental manipulations, UA ecologist Rafe Sagarin and co-author Aníbal Pauchard suggest in their book, “Observation and Ecology.”

Mars rover Curiosity is doing it. School children strolling through the woods with binoculars are doing it. Charles Darwin was doing it. Observing the natural world around them was how the early naturalists started what would later become known as ecology – the science of how living things interact, depend on each other and how their habitats and communities change over time.

In their book, “Observation and Ecology,” ecologists Rafe Sagarin and Aníbal Pauchard make the case that if scientists are to tackle the enormously complex problems the world is facing, researchers and funding agencies have to leave their comfort zone of well-controlled experimental manipulations.

“We argue that observations of the world – whether handed down through the hunting stories of tribal elders, taken by citizens counting neighborhood birds, or compiled from millions of satellite observations of a rain forest – have enormous potential to help us understand a rapidly changing planet,” said Sagarin, an associate research scientist at the UA Institute of the Environment.

He called the book a back-to-the-future story in which the old and sometimes forgotten ways of doing science – through intensive natural observation and a sense that studies of the biological world have direct relevance to human societies – meet today’s enormous environmental challenges, modern observational technologies and greater openness in science to observers from all walks of life.

The scientific method as it is usually taught to college students works by formulating a hypothesis, then devising an experiment to test that hypothesis, do the experiment and either reject, accept or modify the hypothesis depending on the outcome. But this approach, the authors say, falls short when tasked with untangling the myriad of factors that influence global process such as climate change or changes affecting entire ecosystems. 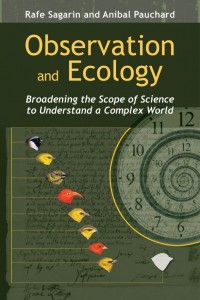 Science has to re-discover its roots of open-ended observation of the natural world to meet today's environmental challenges, authors Rafe Sagarin and Aníbal Pauchard say. Image credit: University of Arizona

“You have to break your experiment down into very small pieces to make sure there aren’t any confounding factors,” Sagarin said. “You have to focus on a very small number of variables to obtain statistically valid results, but of course climate change and other big environmental changes involve huge numbers of variables.”

In other cases, it may be unethical to test a hypothesis by performing experiments, for example when studying how changing temperatures shift the geographical distribution of organisms. “It would not be ethically acceptable to do the experiment you want to do to test this, which is transplanting species outside of their range and then see if they survive.”

In contrast, simply going out into nature and observing might lead to unexpected and valuable discoveries, as Sagarin learned during his time as an undergraduate student at Stanford University’s Hopkins Marine Station at Monterey Bay, Calif. In his effort to learn what animals inhabited the tide pools just outside the institute, he had to dig deep into the library and dust off a scientific publication from the 1930s.

“All I did for my undergraduate thesis was repeat exactly what this guy in the 1930s had done – looking at every square yard along a transect line traversing the shoreline, counting the animals and comparing that to what he had found 60 years earlier.”

His observations, belittled by his fellow students as antiquated biological “stamp-collecting,” turned out to have a profound impact.

“We found that the numbers and varieties of species had completely changed,” Sagarin said, “and when compared to long-time records of water temperatures, our findings were consistent with the idea that the warming climate was affecting these populations. It was one of the first studies showing that climate-related change in animal communities was something that is happening right now, not something out of a computer model that may or may not happen in the future.”

Sagarin said the book is meant as a celebration of the unprecedented opportunities modern science has to offer.

“In the 18th and 19th century, science was curiosity-driven; now we are in an era of science-driven by need – the need to created by massive global change that is forcing us to move away from the small-scale, highly controlled experimental data approach. We are forced to use any data we can get to understand this very complex, multi-scaled, global phenomenon.“

Increasingly, scientists find themselves going back to old records, such as vintage photographs of glaciers that reveal how they have receded.

Science is becoming far more open to ways of observing the world that haven’t typically been part of academia, Sagarin said, such as traditional knowledge of Native Americans, local knowledge of fishermen or loggers, or the collective efforts of citizens who count birds in their neighborhood.

“In the 1930s, more people in the U.S. went to birding parties than to professional baseball games,” he said. “But unlike that early period of discovery, modern science is strongly driven by technology. And while technology has taken us away from nature as we spend more and more time in front of screens, and less time learning to be an observer of the world, that same technology also can make us better observers.”

Exactly how that can work explains Kristin Wisneski, a recent graduate of the UA School of Natural Resources and the Environment, in one of the various case stories collected in the book. 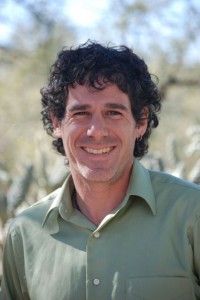 "Science is passed on through story-telling," said Rafe Sagarin, associate research scientist at the UA Institute of the Environment (Photo by: R. Anderson)

As part of an interdisciplinary team at the UA, Wisneski wanted to know if they could turn this problem into an opportunity. The research team designed and implemented smartphone applications for youth to collect observations for problem solving that would contribute to a collaborative group database stored online in a social network called Akshen.

For example, Wisneski writes, “Youth who wonder why the wash or stream behind their house always has trash in it can create a team of friends to investigate and analyze the problem on a community-wide scale and then create a strategy to share information and mobilize community members to help discover solutions.”

Or, “An afterschool youth group that lacks a physical meeting space can map out and analyze the safe and dangerous places in their community to determine ideal locations for a new youth center and bring their findings to city council. Unlike traditional classrooms, the outdoor classroom aided by technology lacks physical and mental boundaries. Learning can happen anytime and anywhere.”

The book’s authors point out that increased appreciation of the power of observational studies doesn’t mean they will supplant experimental or theoretical approaches. Instead, rather than trying to answer questions that are better addressed through unmanipulated observations, experiments can be used strategically to fill in the gaps that remain once many observations have been thrown at a problem.

“We suggest you might not need a hypothesis to start doing science,” Sagarin said. “But eventually you will need one or even several hypotheses.”

He added: “Some would say that purely observational science is not the way you’re supposed to do science, but these approaches are really powerful. Just a few observations can completely overturn decades of belief and they also can tell us a lot about our changing planet.”