There is no approved medicine to treat polyomaviruses, which afflict people with weakened immune systems, but scientists have found that a chemical compound called Retro-2 is able to reduce significantly the infectivity and spread of the viruses in lab cell cultures. Now they are working to improve it.

PROVIDENCE, R.I. [Brown University] — A team of scientists reports that a small-molecule compound showed significant success in controlling the infectivity and spread of three polyomaviruses in human cell cultures. To date there has been no medicine approved to treat such viruses, which prey on transplant recipients, people with HIV, and others whose immune systems have been weakened.

That the compound gained the upper hand on viruses that had a head start is a key advance, said Brown University biologist Walter Atwood, corresponding author of the paper. Other substances have defeated the viruses only if they were used to pre-treat cells before any infection.

“But that’s not reality,” Atwood said. “The reality is that someone is already infected with the virus. Whenever in the past we first infected the cells with the virus and then came in with the drug, we’ve never been successful in being able to stop the spread of the virus. This drug is successful at that.” 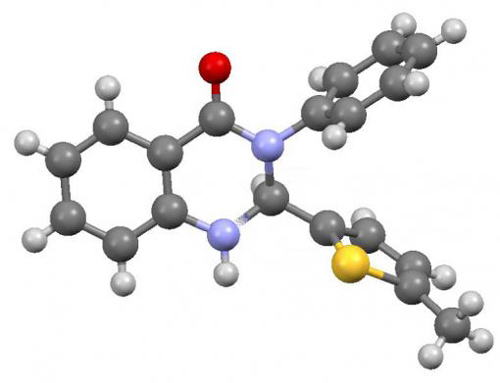 Other substances can control the polyoma virus only if they were administered prior to infection. In cell culture studies, Retro-2 appears to control the infectivity and spread of polyomavirus even when the virus is already established. Image credit: Atwood lab/Brown University

Brown University has a patent filed on the use of the compound against pathogen infections. The research also involved a team of scientists at Yale University led by Daniel DiMaio.

Retro-2 appears to work by blocking the ability of polyomaviruses to sneak around host cells by hijacking the intracellular protein transportation hub: the endoplasmic reticulum (ER).

Christian Nelson, a Brown postdoctoral researcher currently visiting at Yale, first thought to study Retro-2 after reading a 2010 paper in Cell showing that it blocks certain toxins, including ricin, from working through the ER. Ricin and polyomaviruses have been thought to operate similarly. The compound also did not appear to be toxic to the mice in that study.

“There are a lot of viruses that use these trafficking mechanisms,” Atwood said.

So the team bought some Retro-2 from Chembridge, a company that makes vast libraries of small-molecule compounds for scientists to study, and pitted it against the polyomaviruses.

The researchers tested it in several ways, including with both kidney cells and brain cells because those are the tissues in the body where they can cause disease. Retro-2 appeared effective in protecting the various cells, as long as it was present within several hours of infection.

“When this causes disease in people, there’s progressively more and more cells infected,” Nelson said. “If we can identify infection early, a treatment could help to stop that progression.”

Atwood and Nelson acknowledge that they aren’t yet sure exactly how Retro-2 blocks the viruses in the ER, but thanks to a team of collaborating chemists, they do know what chemical structure makes the drug effective.

Brown chemistry professors Jason Sello and Paul Williard and graduate student Daniel Carney studied the compound’s chemical structure. In efforts to prepare Retro-2, Sello and Carney found that the last step in the synthesis yielded not only the reported structure but also a form called a dihydroquinazolinone (DHQ). The DHQ was the apparent result of a “cyclizing” reaction of Retro-2 that gives it a different chemical structure.

Further experiments identified the exact structure of the DHQ form and showed that it was the form that matched what Atwood and Nelson had found to be effective in the lab.

This detailed understanding of the compound is helping Sello and his team improve the drug further.

“A critical part of any drug development program is the unambiguous assignment of the structure of the lead compound,” Sello said. “With knowledge of the Retro-2 structure, we have been rationally preparing analogs that have improved pharmacological properties.”

In addition to Atwood, Sello, Nelson, Carney, Willard, and DiMaio, other authors on the paper are Aaron Derdowski, Gretchen Gee, and Bethany O’Hara of Brown and Alex Lipovsky of Yale.

The National Institutes of Health, the National Science Foundation and Johnson & Johnson supported the research. Some research occurred in Brown’s Leduc Bioimaging Facility and Genomics Core, as well as in Yale’s Cooley lab.