The Antarctic Peninsula, the northern most region of Antarctica, is experiencing some of the most dramatic changes due to climate warming, including population declines of some penguin species.

This is not the first time that region has felt the effects of climate warming. How did penguins respond to the melting of snow and ice cover 11,000 years ago at the end of the last Ice Age?

Today, scientists have traced the genetics of modern penguin populations back to their early ancestors from the last Ice Age to better understand how three Antarctic penguin species – gentoo, Adélie, and chinstrap penguins – fared in response to past climate change. New evidence shows that in contrast to population trends seen today, the penguin populations in the Antarctic Peninsula grew following the end of the last Ice Age. This new research led by scientists from the University of Southampton, Oxford University, and Woods Hole Oceanographic Institution (WHOI) was published June 12 in the journal Scientific Reports. 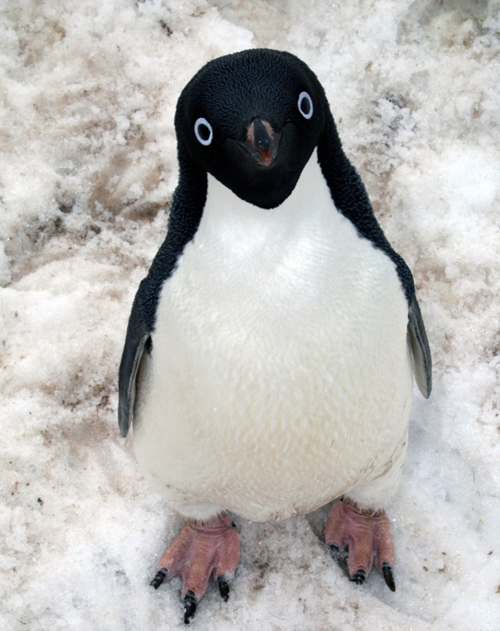 Gentoo, Adélie, and chinstrap penguins need land free of ice to nest and raise their young, as well as ice-free access to the ocean in order to be able to forage for food.

“We typically think of penguins as relying on ice, but this research shows that during the last Ice Age there was probably too much ice around Antarctica to support large populations,” said lead author Gemma Clucas, from Ocean and Earth Sciences at the University of Southampton (U.K.).

So when the snow and ice began to melt following the end of the last Ice Age, new penguin nesting sites with access to the ocean became available allowing all three species’ populations to grow and expand.

“However, despite current warming clearly opening up new opportunities for penguins, we should not assume that rapid warming caused by human activity is good for penguins as a whole,” said Clucas. 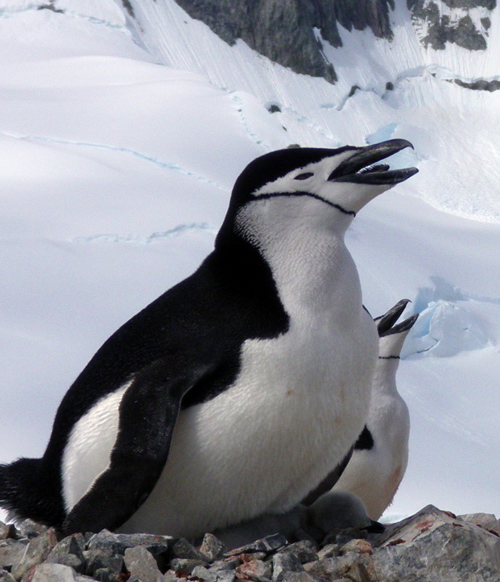 Like Adélie penguins, chinstrap penguins depend on krill as a major food source. Melting sea ice has made for easier access to the ocean in order to forage for food; however it has also brought declines in the availability of krill, which feed on algae living on the underside of ice. (Photo by Mike Polito, Woods Hole Oceanographic Institution)

In fact, today’s warming has not been equally advantageous for all three penguin species because of its impact on penguin food supplies. The underside of sea ice serves as a nursery for young krill, shrimp-like crustaceans that feed on algae growing beneath the ice. Decreased sea ice in the Antarctic Peninsula over the past 50 years has brought a reduction in krill, an important food source for penguins. As a result, Adélie and chinstrap penguin populations are dropping at a precipitous rate in the Antarctic Peninsula, according to several recent studies.

“There may be more breeding habitat available now, but there may not be enough food available to sustain those penguin populations which are declining, especially in the Antarctic Peninsula where the warming is the most severe,” said co-author Michael Polito, a WHOI post-doctoral investigator.

In contrast, gentoo penguin populations continue to grow. Gentoo penguins forage on a variety of prey. Scientists believe this species may be able to better adapt to shortages in krill, because of their flexible diet.

“What we are seeing is a ‘reversal of fortunes’ where increased warming is no longer good for two out of the three species of Antarctic Peninsula penguins. This research shows quite clearly how a single environmental change, in this case warming, can have different consequences over time,” said Polito. 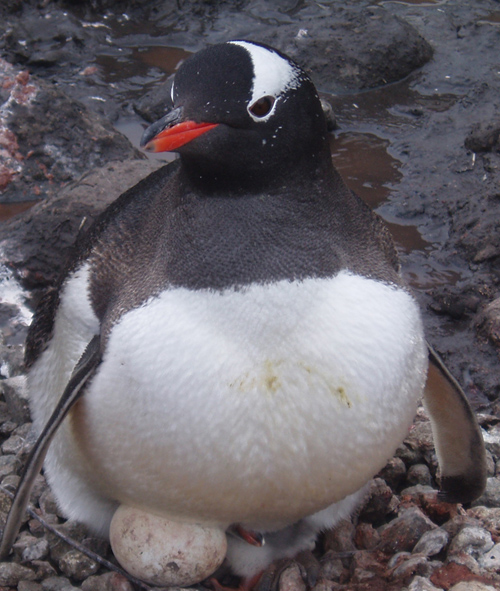 Gentoo penguin populations continue to grow. Gentoo penguins forage on a variety of prey. Scientists believe this species may be able to better adapt to shortages in krill, because of their flexible diet. (Photo by Mike Polito, Woods Hole Oceanographic Institution)

The scientists collected feather and blood samples from 537 modern penguins in colonies around the Antarctic Peninsula and sequenced the penguins’ DNA from these samples. By calculating the rate of mutation, they were able to chart how these populations varied over time in order to result in the genetic diversity and population size exhibited today.

“We are not saying that today’s warming climate is good for penguins. In fact, the current decline of some penguin species suggests that the warming climate has gone too far for most penguins,” said co-author Tom Hart of the University of Oxford’s Department of Zoology.

Within the genetic study of the gentoo species, the scientists saw a variation in population growth between those living north and south of the Antarctic Polar Front, the oceanic dividing line where the cold southern Antarctic waters meet the warmer Atlantic, Pacific, and Indian oceans. Following the last Ice Age, the southern gentoo penguin populations grew at a faster rate than the northern populations. This is most likely because the climate and conditions in the warmer, northern nesting sites did not change as dramatically as the colder, southern sites.

“Without a good understanding of how things were in the past, it’s hard to put what we see now into context. This study gives us a historic perspective on a current phenomenon,” said Polito.