Scientists have marveled at the unusual life forms thriving at high temperature hydrothermal vents of the deep ocean.

Now the discovery of clam communities near lower temperature vents in the Mariana Trench is providing information about both the biogeography of the clams and the extent of the serpentinite vents that sustain them.

A team of scientists from the United States and Japan discovered the vesicomyid clams while conducting deep sea dives from the Japanese R/V Yokosuka to study the geology of the southern Mariana forearc. 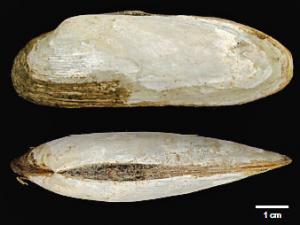 Located east of Mariana Islands in the western Pacific and at the deepest part of Earth’s ocean, the 1,580-mile long trench is where the Pacific Plate is pushed under the Mariana Plate. The research team, which included University of Hawaiʻi at Mānoa’s Fernando Martinez, was exploring an area on the inner trench slope of that convergent margin during September 2010. 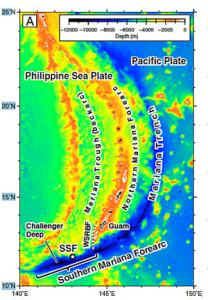 They discovered abundant vesicomyid clam communities associated with a serpentinite-hosted hydrothermal vent system and dubbed the area Shinkai Seep Field for the Japan Agency for Marine-Earth Science and Technology manned submersible Shinkai 6500 used in the dives.

Serpentinite is a type of metamorphic rock formed in the deep-sea by alteration of mantle rock. It is named for its snakeskin-like appearance, characterized by a mottled color, with a waxy luster and curving, polished surfaces, explains Martinez, a researcher in the Hawaiʻi Institute of Geophysics and Planetology.

The serpentinization of peridotite rock generates a hydrogen- and methane-rich environment that supports the biological communities.

Since magmatic heat contribution is unlikely and no serpentinite mud volcanoes were observed, the scientists believe the serpentinization of peridotite at the Shinkai Seep Field is triggered by the flow of heated fluids traveling through faults from the subduction zone.

The vesicomyid clam community is the first live example described from a low-temperature serpentinite-hosted hydrothermal system from either convergent or divergent margins, the researchers write in an article published February 9, 2012, in Proceedings of the National Academy of Sciences’ online edition. 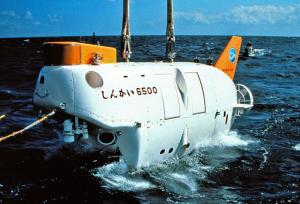 “The discovery of the Shinkai Seep Field supports the prediction that serpentinite-hosted vents may be widespread on the ocean floor,” they write. “The discovery further indicates that these serpentinite-hosted low-temperature fluid vents can sustain high-biomass communities” with implications for both the chemical budget of the oceans and the distribution of abyssal life.

In addition to Martinez, the researchers included scientists from Japan’s Hydrographic and Oceanographic Department, Japan Agency for Marine-Earth Science and Technology, Shizuoka University and Fukada Geological Institute and the University of Iowa, University of Texas at Dallas and University of Rhode Island.

Funding for the research was provided by Institute for Research on Earth Evolution, Japan Agency for Marine-Earth Science and Technology, Japan Society for the Promotion of Science and National Science Foundation.

*Source: University of Hawaiʻi at Māno