*No silver bullet but hope for economy remains, experts tell audience at UD*

Analogies abounded at the 2012 Economic Forecast, where speakers compared monetary policy to turnpike driving, fiscal policy to an empty toolbox and investing to “finding the least worst house on an unstable block.”

Charles I. Plosser, president and CEO of the Philadelphia Federal Reserve, was one of three featured speakers at the annual event, which was sponsored by Lyons Companies and the University of Delaware’s Center for Economic Education and Entrepreneurship (CEEE) and held Tuesday, Feb. 14, at UD’s Clayton Hall.

Plosser warned the record audience of over 450 business owners, educators and economic enthusiasts against “an accelerationist approach” to monetary policy, where policy makers take aggressive action only to have to hit the brakes in order to make change.

“Such an approach can be quite risky and is most often driven by an excessive focus on the short term and some hubris that we could successfully avert the risks such a strategy poses for the economy over the long run,” said Plosser. 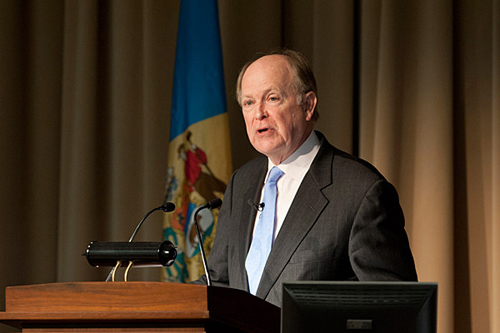 Charles I. Plosser, president and CEO of the Philadelphia Federal Reserve, shares his views during the 2012 Economic Forecast held at UD's Clayton Hall. Photo by Evan Krape

The event opened with remarks by David Lyons, president and CEO of Lyons Companies, and Jim O’Neill, director of the CEEE.

Bruce Weber, dean of the Alfred Lerner College of Business and Economics then spoke briefly about the evolving role of business education, and introduced Plosser and the other panelists.

Plosser also advised against letting policy be guided by dates.

“Monetary policy should be contingent upon the state of the economy and how it evolves, not on the calendar,” he said, referring to the recent practice of offering policy guidance based on the expectation that low rates can be sensibly maintained through some future calendar date. 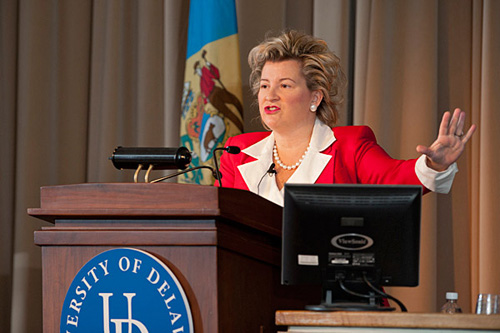 “The toolbox is empty and we can no longer ignore the systemic budget deficit,” said Woodward. “Current U.S. debt is over $15 trillion, we narrowly avoided the debt ceiling default last summer and in August we faced the global embarrassment of the S&P downgrade of U.S. government treasuries.”

For Woodward, the time has come for Americans to reconsider what is acceptable.

“When the country hit $300 billion in debt, it was unacceptable,” said Woodward, citing the 1995-96 federal government shutdown and budgetary impasse that ultimately resulted in tax raises, spending cuts and a budget surplus.

“Now we’re hitting $1.4 trillion and this should not be acceptable,” she said. “There are major public policies that need to be addressed, and we all have a stake in this.”

To hit home her point, Woodward shared a video trailer for Overdraft, a documentary that examines the impact of America’s debt crisis and features interviews with former President Bill Clinton, Travelers chairman and CEO Jay Fishman, and various political and media experts.

The documentary was funded by the Travelers Institute and, according to Woodward, will appear on the Public Broadcasting Service in April. 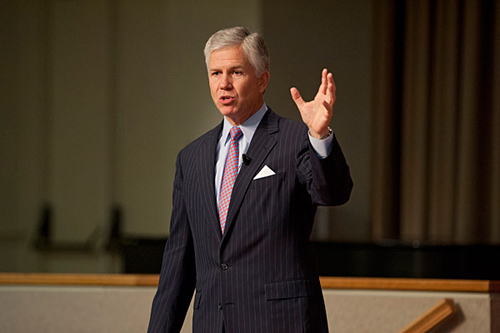 Michael K. Farr, president of Farr, Miller and Washington and author of the book "The Arrogance Cycle," speaks about rising government and consumer debt. Photo by Evan Krape

Michael K. Farr, president of the portfolio management firm Farr, Miller and Washington, LLC, author of The Arrogance Cycle and a featured speaker at the annual conference since 2009, gave the third round of remarks, which focused largely on a paradigm shift.

“As Americans, our attitudes have shifted,” said Farr, noting the acceptable paradigm of striving, yearning and sacrifice of the 1930s through necessary change and commitment when the country faced war.

Citing the oft-quoted excerpt from President John F. Kennedy’s inaugural address, Farr called for Americans to think once again about what they can do for their country.

“It’s time we look in the mirror,” said Farr. “‘American’ has become interchangeable with ‘consumer.’ We want all of these things, yet as the government debt rises so does consumer debt. We need to understand that changing the economy has to be a group effort.”

A group effort that, according to Farr, has to get more to the heart of the issue.

“What happened in 2011? Modest economic growth was fueled by deficit spending,” said Farr. “I suggest that’s not sustainable. Unemployment remained elevated. Why did the dollar stabilize? Because we were the least worst house on an unstable block in an unstable area.” 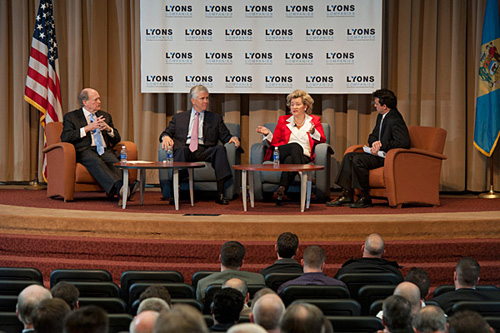 The 2012 Economic Forecast panel on stage at UD's Clayton Hall. The panel discussion was moderated by Jon Hilsenrath, chief economic correspondent with the Wall Street Journal. Photo by Evan Krape

According to Farr, keys to creating sustainable economic growth include continued spending by consumers and stabilizing the housing sector by clearing supply backlogs and reducing dependence on government and federal support.

Despite these critical analogies, the experts suggested hope for improvement remains.

“The challenges are many but so are the opportunities,” said Farr. “We live in a free capitalistic society where innovation is rewarded. We have an educated work force, there are positive demographic trends, stock valuations are reasonable. Now we need to be willing to empower elected officials and tell Congress to vote for the right thing.”

Woodward agreed that elections could play a key role in shaping how the country deals with debt at the federal, state and local levels of government.

“Can the Republicans’ 2010 sweep of the House translate to a new mandate for change at the presidential level in 2012? We’ll have to wait and see,” she said.

Plosser also noted there could be stabilization in the housing sector, although “not much improvement in 2012 and no likelihood of recovery until foreclosures and inventory declines.”

The event concluded with a panel discussion moderated by Jon Hilsenrath, chief economic correspondent with the Wall Street Journal.

Audience members posed questions and the panelists spoke further about the pressure facing central banks around the world and the misperception that monetary policy or a stimulus bill could single-handedly heal the economy.

“People have come to expect that monetary policy can do more than it actually can and that can be dangerous,” said Plosser. “We need to understand that there is no silver bullet.”

Hilsenrath pressed the panel on whether they saw a political configuration that might change the approach, as well as their outlook on inflation.

“Global investors aren’t worried about inflation,” said Hilsenrath. “What do you see that they aren’t seeing?”

“The near-term outlook for inflation is moderate,” said Plosser, who forecast that inflation will settle around two percent in 2012. “We just need policy to be conducted in a way that avoids having to act so abruptly and aggressively that we undo the encouragement and growth the economy is gaining.”