Fieldwork in Peru’s Andes Mountains is demanding, especially when it involves hauling heavy equipment to remote sites that are accessible only by traversing the region’s rugged terrain.

But the task of collecting insects for the study of vector-borne diseases and other purposes has become a little less onerous since a Yale School of Public Health researcher and colleagues designed a lighter — and perhaps better — trap.

The updated device incorporates modern lighting technology in the form of light emitting diodes (LEDs) that offer researchers conducting fieldwork some distinct advantages over previous light-based designs. The new trap is substantially lighter and more durable and runs far longer in isolated areas where fresh batteries will likely be hard to come by.

LEDs also may be more effective at luring the insects that researchers want to study. This is because LEDs offer much more flexibility in the wavelength of light emitted than conventional incandescent or fluorescent forms of lighting. With an LED, a specific range of light, down to a few nanometers of the electromagnetic spectrum, can be selected. Traditional lighting sources emit light over a much broader range of the spectrum, even across hundreds of nanometers, the vast majority of which is infrared light and cannot be seen by insects. It is, thus, little more than wasted energy. 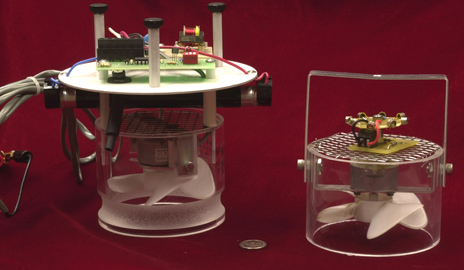 “It’s a boon to fieldwork,” Leonard E. Munstermann, senior research scientist in the division of Epidemiology of Microbial Diseases, said of the device, which is now commercially available through a company that supplies field and laboratory equipment to researchers and entomologists. “It was born of the need to travel light.”

The idea for the redesigned device came about several years ago during fieldwork in Peru on the sand fly that causes leishmaniasis, a disfiguring and potentially deadly disease that afflicts people in many parts of South America and other regions of the world.

Munstermann and a then-doctoral student, Lee W. Cohnstaedt, were doing research in three adjacent highland valleys, each of which was separated from the next valley by steep terrain over which the fly is incapable of crossing. The setting allowed them to study the evolutionary effects of time — eons of it — on three isolated pockets of sand flies that geography had prevented from breeding with one another. It was a perfect laboratory, but existing light technology proved burdensome. 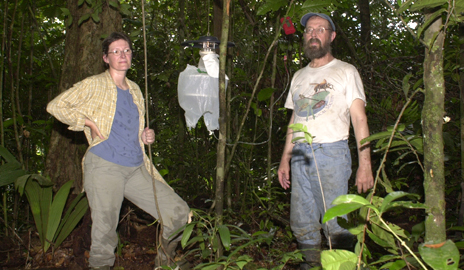 The research required backpacking into each of the isolated valleys and traversing some pretty rough terrain. Under such conditions every pound of research equipment matters, and it was important that, once the equipment was in place, it was able to run for nights at a time on the original batteries. The LED-modified version did all of this, and the light that was emitted resulted in the capture of plenty of sand flies as well. With an abundance of flies to study from each of the region’s three distinct valleys, the researchers were able to identify genetic variations among the flies from valley to valley. In short, they uncovered evidence that sand fly evolution was taking place.

The finding has a number of implications, both practical and theoretical. Sand fly specification could affect the resistance to existing pesticides and change the virulence of the pathogens they carry. It also provides researchers with a window into the epidemiology of the disease and how it might develop in the future. But it complicates things considerably for the taxonomist, raising questions about what a species is.

As for the LED-modified trap models, they were further field-tested in places such as Colombia and French Guiana and performed well. In one experiment, three types of light sources (LED, fluorescent and incandescent) were used in separate devices to see how many sand flies each caught. The one with LEDs netted 92 flies, compared with 46 for the device using the fluorescent bulb and 65 flies for the incandescent light. The National Institute of Allergy and Infectious Diseases, at the National Institutes of Health, provided funding for the redesigned trap.

Munstermann briefly considered trying to patent the new LED-modified model, but he discovered that the process was both complicated and expensive. And, in the end, there is only a limited market for devices that entrap insects, no matter how good they might be.

Of course, light-based collection devices are only one of the types used to collect insects. Other types of traps rely on animal carcasses, molasses and even piles of fresh manure to entice their quarry. There are no plans, Munstermann noted, to modify any of these.