AUSTIN, Texas — Scientists at The University of Texas at Austin and the University of California at San Francisco have revealed how a type of cancer-causing virus called Epstein-Barr virus (EBV) outwits the human body’s immune response. By helping explain why some cancer therapies fail, the discovery might lead to more effective treatments.

EBV, a virus of the herpes family, causes an estimated 200,000 cancers every year, including lymphomas, nasopharyngeal cancers and some stomach cancers. Better anti-viral drugs could help thousands of people suffering from these cancers.

Many viruses, including EBV, carry small molecules called microRNAs that they use to hijack natural processes in a host’s cells during an infection. Viral microRNAs are known to prevent host cell death, promote host cell growth and dampen the host cell’s viral defenses. However, scientists don’t yet know which viral microRNAs perform which functions. 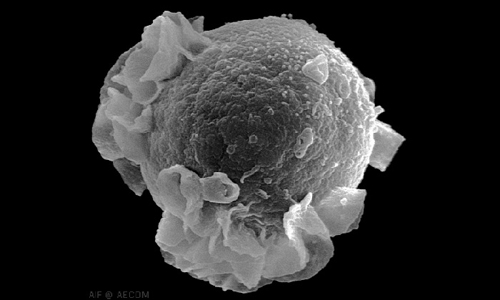 An Epstein-Barr virus erupting from an infected immune cell, called a B lymphocyte. Image credit: Analytical Imaging Facility at the Albert Einstein College of Medicine.

Jennifer Cox, a graduate student working with Associate Professor Chris Sullivan at The University of Texas at Austin, identified microRNAs made by several herpes viruses that block a component of a human’s innate immune system called the interferon response. Immune cells within the body release interferon to prevent viral replication, and this often results in slower growth or death of infected host cells. The researchers found that several herpes viruses have independently evolved similar mechanisms to block the host’s interferon response.

“I was actually surprised that all these different viruses had converged on the same mechanism for blocking the body’s defenses,” said Sullivan. “As a biologist, I see this as evolutionary gold.”

Interferon is sometimes used in combination with chemotherapy to treat lymphomas. Although it is an effective treatment for some cancers, it does not significantly affect others. This latest research has demonstrated that EBV lymphoma cells are less susceptible to interferon therapy.

“This could explain the variability seen in the success of previous interferon-based cancer treatments,” said Cox. “While this work does not immediately identify new drugs, the fact that such different tumor viruses have converged on the same strategy makes this an exciting pursuit for future therapies against viral cancers.”

This work appears online in the Jan. 26 edition of the Proceedings of the National Academy of Sciences. In addition to Cox and Sullivan, co-authors of the study are Lydia McClure at The University of Texas at Austin and Andrei Goga from the University of California at San Francisco.

This research was funded by the National Institutes of Health and the Cancer Prevention and Research Institute of Texas.