While only 20 per cent of Canada’s police forces have an explicit policy against reporting the race of victims and accused persons, criminologists from the University of Toronto and Nipissing show that the majority of police departments do not report race in practice.

The study, by Akwasi Owusu-Bempah, a PhD candidate at the University of Toronto’s Centre for Criminology, and Paul Millar, an associate professor at Nipissing University’s School of Criminology and Criminal Justice,  is entitled Whitewashing Criminal Justice in Canada: Preventing Research through Data Suppression and appears in the current issue of the Canadian Journal of Law and Society.

“Information on race is essential for the equitable provision of policing services and for the development of police policy,” said Owusu-Bempah.

Recent studies show that blacks are over-represented in local police stops in Canada and Aboriginals are over-represented in Canadian prisons. Part of the explanation for over-representation, the authors write, is that these minorities are often situated in positions of social disadvantage, putting them at greater risk of involvement in crime as both victims and perpetrators. But differential treatment by police and others aspects of criminal justice is an important factor as well. 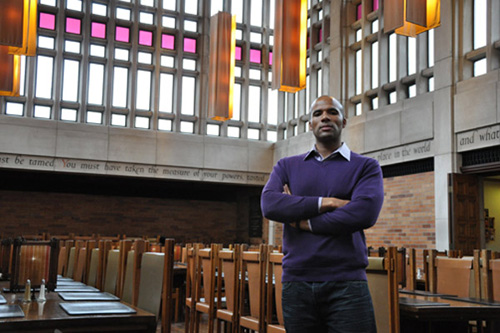 PhD candidate Akwasi Owusu-Bempah believes that police forces must keep data on race as a way of improving policies for dealing with citizens fairly. (Photo by Diana Tyszko)

“If we are serious about reducing racism and making our law responsive to behaviour instead of personal characteristics, we must systematically collect data on race,” said Millar, lead author of the study.

The researchers found that where race is reported it is often done so inconsistently. For example, some surveys may explicitly identify someone as being “Aboriginal” while others identify only “visible minority.”  Statistically, visible minority is not a useful category because it combines racial groups that are over-represented in the criminal justice system with others that are under-represented, thus obscuring problems involving race.

The authors evaluated available data on victims and accused persons in Canada, including Statistics Canada surveys and country-wide surveys of police-reported crime. The Uniform Crime Reporting (UCR) survey, which all police services in Canada have responded to  since 1962 (with the exception of a few Aboriginal police detachments), does not include race. The Uniform Crime Reporting Incident-based survey records no race other than Aboriginal origin. Finally, for the homicide survey which has been collected on murder since 1961, no race is recorded other than Aboriginal origin. The authors note that while Aboriginal is an important category – arguably the most important in Canada – there may be some jurisdictions, such as Halifax or Toronto where other categories, such as black, may be of more interest.

Millar and Owusu-Bempah argue transparency is key to better relationships between the police and the communities they serve.

“Police agencies in this country spend millions of dollars a year on initiatives to improve relations with racialized communities and to reduce racial discrimination within policing. Without adequate information about the racial background of individuals who come into contact with, or are dealt with by the police, these initiatives cannot be accurately developed or evaluated for effectiveness,”  said  Owusu-Bempah.