Clues to future climate may be found in the way an ordinary drinking glass shatters.

Results of a study published this week in the journal Proceedings of the National Academy of Sciences find that microscopic particles of dust can break apart in patterns that are similar to the fragment patterns of broken glass and other brittle objects.

The research, by National Center for Atmospheric Research (NCAR) scientist Jasper Kok, suggests there are several times more dust particles pumped into the atmosphere than previously believed, since shattered dust appears to produce an unexpectedly high number of large fragments.

The finding has implications for understanding future climate change because dust plays a significant role in controlling the amount of solar energy in the atmosphere.

Depending on their size and other characteristics, some dust particles reflect solar energy and cool the planet, while others trap energy as heat. 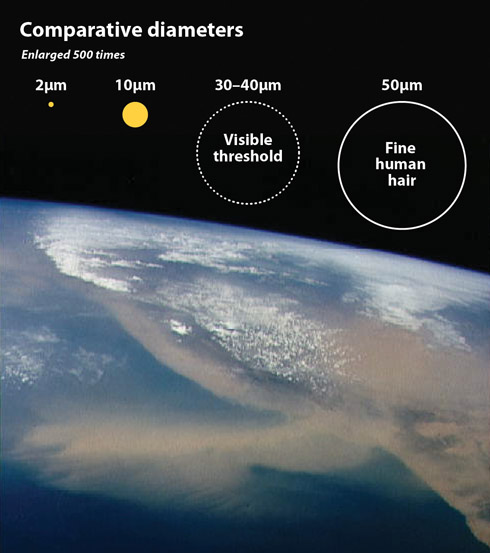 The comparative sizes of dust particles in the atmosphere. The photo is a satellite image of a 1992 dust storm over the Red Sea and Saudi Arabia. Image credit: NCAR

“As small as they are, conglomerates of dust particles in soils behave the same way on impact as a glass dropped on a kitchen floor,” Kok says. “Knowing this pattern can help us put together a clearer picture of what our future climate will look like.”

The study may also improve the accuracy of weather forecasting, especially in dust-prone regions. Dust particles affect clouds and precipitation, as well as temperature.

“This research provides valuable new information on the nature and distribution of dust aerosols in the atmosphere,” says Sarah Ruth, program director in the National Science Foundation (NSF)’s Division of Atmospheric and Geospace Sciences, which funds NCAR.

“The results may lead to improvements in our ability to model and predict both weather and climate.”

Kok’s research focused on a type of airborne particle known as mineral dust.

These particles are usually emitted when grains of sand are blown into soil, shattering dirt and sending fragments into the air. 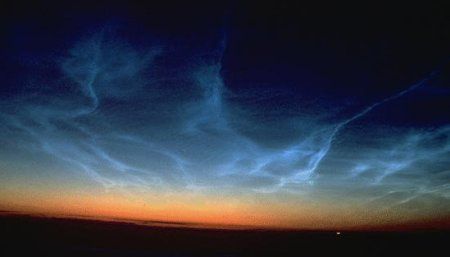 The secret of atmospheric dust and its relationship with climate may be in a drinking glass. Image credit: NASA

The fragments can be as large as about 50 microns in diameter, or about the thickness of a fine strand of human hair.

The smallest particles, which are classified as clay and are as tiny as 2 microns in diameter, remain in the atmosphere for about a week, circling much of the globe and exerting a cooling influence by reflecting heat from the Sun back into space.

Larger particles, classified as silt, fall out of the atmosphere after a few days. The larger the particle, the more it will tend to have a heating effect on the atmosphere.

Kok’s research indicates that the ratio of silt particles to clay particles is two to eight times greater than represented in climate models.

Since climate scientists carefully calibrate the models to simulate the actual number of clay particles in the atmosphere, the paper suggests that models most likely err when it comes to silt particles.

Most of these larger particles swirl in the atmosphere within about 1,000 miles of desert regions, so adjusting their quantity in computer models should generate better projections of future climate in desert regions, such as the southwestern United States and northern Africa. 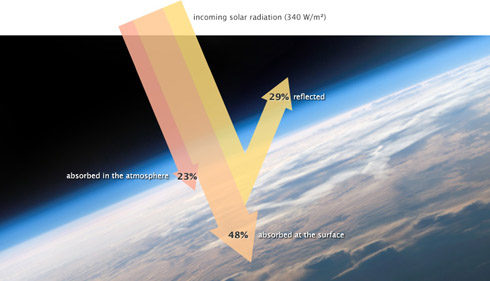 Additional research will be needed to determine whether future temperatures in those regions will increase as much or more than currently indicated by computer models.

The study results also suggest that marine ecosystems, which draw down carbon dioxide from the atmosphere, may receive substantially more iron from airborne particles than previously estimated.

In addition to influencing the amount of solar heat in the atmosphere, dust particles also are deposited on mountain snowpacks, where they absorb heat and accelerate snowmelt.

Physicists have long known that certain brittle objects, such as glass, rocks, or even atomic nuclei, fracture in predictable patterns. The resulting fragments follow a certain range of sizes, with a predictable distribution of small, medium, and large pieces.

Scientists refer to this type of pattern as scale invariance or self-similarity.

Physicists have devised mathematical formulas for the process by which cracks propagate in predictable ways as a brittle object breaks.

Kok theorized that it would be possible to use these formulas to estimate the range of dust particle sizes. By applying the formulas for fracture patterns of brittle objects to soil measurements, Kok determined the size distribution of emitted dust particles.

To his surprise, the formulas described measurements of dust particle sizes almost exactly.

“The idea that all these objects shatter in the same way is a beautiful thing, actually,” Kok says. “It’s nature’s way of creating order in chaos.”