A microbe developed to clean up nuclear waste and patented by a Michigan State University researcher has just been improved.

In earlier research, Gemma Reguera, MSU microbiologist, identified that Geobacter bacteria’s tiny conductive hair-like appendages, or pili, did the yeoman’s share of remediation. By increasing the strength of the pili nanowires, she improved their ability to clean up uranium and other toxic wastes.

In new research, published in the current issue of Applied and Environmental Microbiology, Reguera has added an additional layer of armor to her enhanced microbes.

The microbes also use the pili to stick to each other and grow a film on just about any surface, similar to the bacterial film that forms on teeth. The Geobacter biofilm, encased by a network of nanowires and slime, gives the bacteria a shield and increases their ability to neutralize even more uranium. The improvement also allows the bacteria to survive longer even when exposed to higher concentrations of the radioactive material. 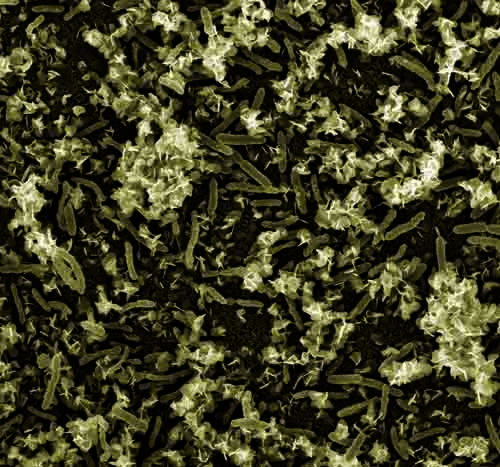 A microbe developed to clean up nuclear waste and patented by Gemma Reguera, MSU microbiologist, has just been improved. Photo by Dena Cologgi

Geobacter immobilizing uranium can be described as nature’s version of electroplating. The beefed-up microbes engulf the uranium and turn it into a mineral, preventing the toxic material from leaching into groundwater.

Reguera’s team had previously linked the conductive pili to the ability of the microbe to mineralize the soluble uranium. As the biofilm concentrates many nanowires around the Geobacter cells, more uranium can be bound and mineralized. The pili are immersed in a matrix of slime, which surrounds the biofilm cells and boosts the Geobacter’s pili armor, so the biofilm now can pull double duty by helping mineralize uranium.

The shield keeps the uranium from penetrating deep into the Geobacter biofilm. By keeping this process on the surface of the film, the bacteria are not exposed to uranium and, as a community, they are able to clean up more toxic waste.

“The results surpassed our most optimistic predictions,” Reguera said. “Even thin biofilms immobilized uranium like sponges. They reduced it to a mineral, all while not suffering any damage to themselves, for prolonged periods of time.” 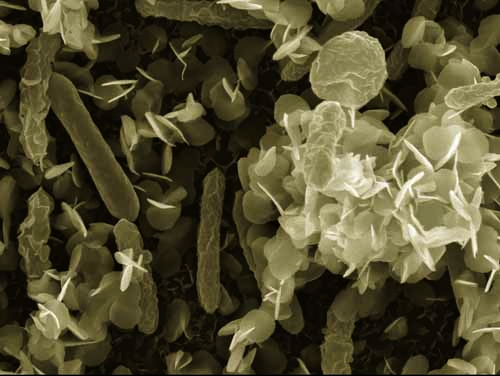 MSU microbiologist Gemma Reguera has added an additional layer of armor to her patented microbes. Photo by Dena Cologgi

Even when exposed to extremely high and toxic concentrations of uranium, levels that would destroy individual Geobacter cells, the biofilms didn’t just survive, they thrived, she added.

Reguera’s future research on this front will focus on deciphering how the biofilm matrix that encases the cells shields them so effectively and how to improve its properties further.