COLLEGE PARK, Md. — Using a tiny bloodless worm, University of Maryland Associate Professor Iqbal Hamza and his team have discovered a large piece in the puzzle of how humans, and other organisms, safely move iron around in the body. The findings, published in the journal Cell, could lead to new methods for treating age-old scourges – parasitic worm infections, which affect more than a quarter of the world’s population, and iron deficiency, the world’s number one nutritional disorder.

Using C. elegans, a common microscopic worm that lives in dirt, Hamza and his team have identified a protein, called HRG-3 that transports heme — the iron containing molecule that creates hemoglobin in blood — from the mother’s intestine to her developing embryos. According to Hamza and his coauthors this newly identified HRG-3-mediated pathway for transporting heme to developing oocytes also appears to be an excellent target for stopping the reproduction of hookworms and other parasites that feed on host red blood cell hemoglobin.

This new finding builds on a breakthrough Hamza’s team made three years ago, when he and colleagues discovered HRG-1, a protein common to humans, which transports heme from the environment into the intestine of C. elegans.

“We’ve known the structure of hemoglobin for a really long time,” said Hamza, “but we haven’t been able to figure out how the heme gets into the globin, or exactly how humans and other living organisms move heme, which like iron is toxic, around and between cells.” Such an understanding of how heme is transported in the body is critical to our understanding of how our bodies process and use iron, and thus of the development of more effective ways to deliver iron for absorption in the human intestine, he explained.

Hamza first started trying to uncover the secrets of heme transport in 2003. He and his team were studying the molecules and mechanisms involved in heme absorption in the intestine of C. elegans when, in 2008, they discovered that the protein HRG-1 escorts heme into the worm’s gut, the first step of the intercellular journey.

“Now, in this current study we’ve looked at the next step in the transport process, which is how the worm moves heme from the intestine to other parts of its body” he said.

Hamza explained that for this step they chose to first study transport of heme between the mothers intestine and developing embryos because studies in mammals had implied the existence of a pathway for ferrying and depositing mothers heme into her embryos, but no such route had been identified. In addition, in C. elegans, it was easier to manipulate experimental conditions to clearly see the life and growth impacting effects of the presence or absence of heme while simultaneously looking at two separate organisms  the mother and her embryos all residing within a fully transparent living animal.

Iron is an absolute requirement for humans and most other forms of life, but because it is a free radical ‘instigator,’ it can also be toxic. To protect themselves, organisms surround iron with protein escorts to allow it to be safely moved within the body. The most important class of iron-containing compounds is heme. Heme gets incorporated into hemoglobin, the most familiar iron-binding protein, which carries oxygen and makes blood red.

Most organisms from bacteria to humans make their own heme, but it takes eight complicated steps. For decades this complex synthesis pathway acted as an obstacle that stymied all attempts to study heme transport in the usual lab suspects like rats or mice or yeast. 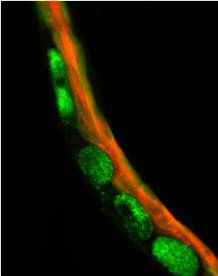 Heme (red) is eaten by an pregnant worm. It will be delivered, along with yolk components, to developing offspring (green). Image credit: Tamika Samuel, Jason Sinclair and Iqbal Hamza, University of Maryland

Early in his research of heme transport, Hamza, also tried unsuccessfully to use mice and yeast. But then he got the inspiration to try a non-intuitive approach. He decided to test an organism that doesn’t make heme, but needs it to survive; one that doesn’t even have blood, but shares a number of genes with humans – the roundworm C. elegans, a microscopic soil nematode.

“We tried to understand how blood is formed in an animal that doesn’t have blood, that doesn’t turn red, but has globin,” Hamza said.

C. elegans gets heme by eating bacteria in the soil where it lives. It consumes heme and transports it into the intestine. “So now you have a master valve to control how much heme the animal sees and digests via its food,”

C. elegans has several other benefits for studying heme transport. Hamza’s team can control the amount of heme the worms eat. With only one ‘valve’ controlling the heme transport, the scientists knew exactly where heme was entering the worm’s body. In humans, it is synthesized in trillions of body cells.

Hamza explained that C. elegans have another distinct advantage as study subject, they are transparent. By adding a fluorescent marker to heme that the worms will ingest, researchers can actually see the heme that a worm takes in as it moves within the worm’s body.

Parasitic worms including hookworms, whipworms and threadworms are similar to C. elegans in that they get heme from external sources. Thus both, C. elegans and parasitic worms are likely to be dependent on the same heme transport pathways for growth and reproduction. In their study in Cell, Hamza and his colleagues say their new findings indicate that a prime target for new treatments against parasitic worms is the HRG-3-mediated pathway by which heme is transported to developing eggs.

“More than two billion people are infected with parasitic worms,” says Hamza. “Hookworms, alone, infect more than a billion people. These worms eat a huge amount of hemoglobin and heme in their hosts. By simultaneously understanding heme transport pathways in humans and worms, we can exploit heme transport genes to deliver drugs disguised as heme to selectively kill parasites, but not harm the host.”

Hamza, also said he believes that filling in pieces of the heme transport puzzle is beginning to reveal the possibility of new therapeutic approaches to treating iron deficiency, the world’s number one nutritional disorder. “Perhaps, given the importance of heme in many different metabolic processes in the body, heme transport research may even yield new insights into other health issues,” he said.

Hamza has co-founded a new company called HemeCentric, Inc. to develop anti-parasite drugs and heme-based iron supplements based upon discoveries in heme biology and iron regulation. HemeCentric recently won the Warren Citrin Social Impact Award during the 2011 University of Maryland Business Plan Competition. In 2010, Hamza won the Best Inventor Pitch at the university’s Bioscience Research and Technology Review Day with a screening technique that allows doctors and veterinarians to screen hosts for multiple parasitic targets simultaneously.

“An Intercellular Heme-Trafficking Protein Delivers Maternal Heme to the Embryo during Development in C. elegans,” Cell, May 27, 2011. In addition to first author Hamza, other researchers on the study were: Caiyong Chen, Tamika K. Samuel and Jason Sinclair of the Department of Animal & Avian Sciences, University of Maryland; and Harry A. Dailey, of the Biomedical and Health Sciences Institute, Department of Microbiology and the Department of Biochemistry and Molecular Biology, University of Georgia.

The research was supported by the National Institutes of Health.