Blocking cells’ movement to stop the spread of cancer

Insights into how cells move through the body could lead to innovative techniques to stop cancer cells from spreading and causing secondary tumours, according to new UCL research.

Scientists discovered that cells can change into an invasive, liquid-like state to readily navigate the narrow channels in our body. This transformation is triggered by chemical signals, which could be blocked in order to stop cancer cells from spreading.

Most cancer deaths are not due to primary tumours, but to secondary tumours in vital organs, such as the lungs or brain, caused by cells moving from the original tumour to other places in the body. 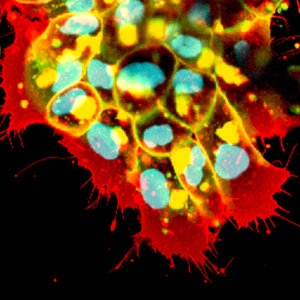 The study led by UCL researchers and published in the Journal of Cell Biology, used embryonic cells to investigate how groups of cells move in a developmental process similar to that used by cancer to spread around the body.

The team report a molecule called lysophosphatidic acid (LPA) changes cells from a solid-like to a liquid-like state, allowing cells to flow between normal tissues in the body.  Scientists were able to switch off the signals from LPA, stopping the cells from moving down narrow, blood vessel-like channels.

Lead scientist Professor Roberto Mayor (UCL Cell & Developmental Biology), said:“We have found a way to stop the movement of embryonic cells by blocking LPA signals. It is likely that a similar mechanism operates during cancer invasion, which suggests a promising alternative in which cancer treatments might work in the future, if therapies can be targeted to limit the tissue fluidity of tumours.

“Our findings are important for the fields of cell, developmental and cancer biology. Previously, we thought cells only moved around the body either individually or as groups of well-connected cells. What we have discovered is a hybrid state where cells loosen their links to neighbouring cells but still move en masse together, like a liquid. Moreover, we can stop this movement”.

The work was co-authored by researchers at Kings College London and Cambridge University, UK and Akita University, Japan.