COLLEGE PARK, Md. — In a single cave in Ecuador, a species of cavefish has evolved to do something perhaps unique to them, navigate with their teeth.

The sensory use of these teeth, which are not in their mouths, but protrude from their skin, appears to be a previously unknown evolutionary phenomenon, one that may not exist anywhere outside this one cave, say researchers at the University of Maryland, National Institutes of Health and Pontificia Universidad Católica del Ecuador who brought to light this fascinating new adaptation to life in dark, swiftly flowing waters.

Many fish have such skin teeth (denticles), which are surrounded by dentine and capped in enamel, but most use them for cutting, protection or to reduce drag when swimming. Astroblepus pholeter, the catfish that lives in this Ecuadorian cave, developed a new use: sensing their world. University of Maryland assistant professor Daphne Soares and her colleagues found that the skin teeth of these fish evolved into environment-sensing tools, projecting hydrodynamic images that allow them to feel their way in darkness and fast currents. The teams findings were recently published in Current Biology. 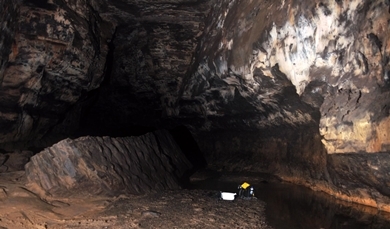 Cave in Ecuador where UMD scientists found cavefish that navigate with their teeth. Image Credit: Daphne Soares, University of Maryland

”We have now a whole new sensory organ to examine when we find new species,” said Soares, who works in the biology department of the University of Maryland College of Computer, Mathematical and Natural Sciences. ”More importantly, we found a new way in which evolution has allowed animals to live in this challenging environment. It’s not only completely dark but the world around them is also flowing fast.”

Fish usually sense water flow with neuromasts, small organs in their lateral lines that share characteristics with the human ear. Most cavefish have an enlarged neuromast system to adapt to life in darkness but the A. pholeter has next to none. Instead, their skin teeth connect to the mechanosensory part of the brain, allowing them to detect the direction of water flow and the distance from the bottom as the currents deflect their teeth, the study found. The researchers observed that fish with their denticles removed could not orient in flowing water or cling to rocks along the bottom.

The fast, turbulent water where the A. pholeter live may be why their skin teeth evolved as they did, Soares believes. The current may be too strong for the neuromast system to develop as it may have. “Think of trying to hear someone talking in a rock concert–the background noise is too high,” she explained. 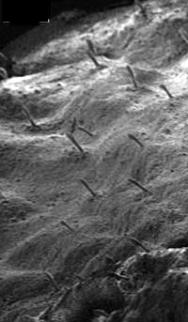 One hypothesis is that fish live in strong currents on the surface, but there they also have eyes. Denticles are stiffer and likely less sensitive, like wearing foam ear plugs to hear the really loud band, said Soares, whose previous research includes the discovery of a major sensory ability in alligators, published in the May 2002 issue of the Journal Nature.

”We expect that the mechanosensory nature of denticles highlighted in this extreme species will uncover a widespread sensory role for these structures in other animals,” Soares and her coauthors conclude in their new study.