Calculations find a flaw in the firewall argument

Black holes aren’t surrounded by a burning ring of fire after all, suggests new research.

Some physicists have believed in a “firewall” around the perimeter of a black hole that would incinerate anything sucked into its powerful gravitational pull.

But a team from The Ohio State University has calculated an explanation of what would happen if an electron fell into a typical black hole, with a mass as big as the sun. 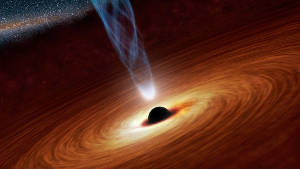 “The probability of the electron hitting a photon from the radiation and burning up is negligible, dropping even further if one considers larger black holes known to exist in space,” said Samir Mathur, a professor of physics at Ohio State. The study appears in the Journal of High Energy Physics.

The new study builds on previous work from 2004 led by Mathur that theorized that black holes are basically like giant, messy balls of yarn – “fuzzballs” that gather more and more heft as new objects are sucked in. That theory, Mathur said, resolved the famous black hole “information paradox” outlined by Steven Hawking in 1975. Hawking’s research had concluded that particles entering a black hole can never leave. But that ran counter to the laws of quantum mechanics, creating the paradox.

The firewall argument emerged in 2012, when four physicists from the University of California, Santa Barbara argued that any object like a fuzzball would have to be surrounded by a ring of fire that will burn any object before it could reach the fuzzball’s surface.

“What we’ve shown in this new study is a flaw in the firewall argument,” Mathur said.

Black holes are places in space with such immense gravitational pull that not even light can escape once it’s captured. Their powerful pull condenses any matter black holes draw in. They are invisible, but scientists have established that black holes can range from tiny to huge, estimations that are based on the behavior of stars and gas surrounding the black hole.

After months of mathematical machinations, Mathur and his team arrived at their by-the-numbers explanation to support their theory discounting the firewall. It’s built on string theory, the scientific notion that the universe is composed of subatomic string-like tubes of energy. The belief is rooted in the marriage of quantum mechanics (which concerns itself with the mathematics of subatomic particles) and Albert Einstein’s theory of relativity.

Mathur has always counted himself among those scientists who are firewall skeptics.

“The question is ‘Where does the black hole grab you?’ We think that as a person approaches the horizon, the fuzzball surface grows to meet it before it has a chance to reach the hottest part of the radiation, and this is a crucial finding in this new physics paper that invalidates the firewall argument,” he said.

“Once a person falling into the black hole is tangled up in strings, there’s no easy way to decide what he will feel.

“The firewall argument had seemed like a quick way to prove that something falling through the horizon burns up. But we now see that there cannot be any such quick argument; what happens can only be decided by detailed calculations in string theory,” Mathur said.