Global garden: How one man’s vision to feed his family blossomed into an international effort

Nine years ago, Dennis McClung had a rundown swimming pool and an ambitious goal — to plant a garden that would provide a self-sustaining food system for his family.

McClung and his wife transformed the empty cement pit behind their home in Mesa, Arizona, into a closed-loop ecosystem teeming with life, from vegetables to chickens, even a pond with tilapia. The innovative urban farm was soon producing enough food to feed the couple and their three young children, cutting their monthly grocery bill by almost half.

But what McClung accomplished after that is even more remarkable.

With no formal training — just plenty of ingenuity, hard work and resourcefulness — McClung is now helping people around the world build climate-resilient and highly productive food systems. Since launching his nonprofit organization, Garden Pool, in 2012, McClung’s backyard experiment has bloomed into a multifaceted operation that is collaborating with foreign governments on food sustainability, operating public seed libraries, offering classes and workshops, developing a solar-powered water sterilization system and most recently, working on a HoloLens application designed to help users build customized food systems. 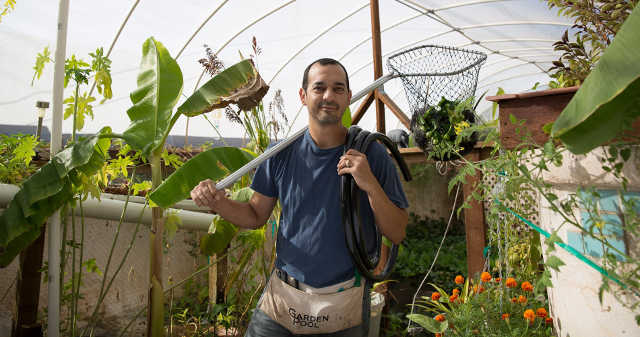 The organization, which opened a storefront in Mesa in July that sells farm-fresh food and gardening materials, has a core team of approximately 20 employees, plus more than 1,600 volunteers worldwide, and is working on projects in about 40 countries.

Though McClung’s farming methods might be low-tech, the technology he uses to power his organization is not. He uses Windows 10, Office 365 and a Surface device for graphic design, research, proposals and marketing; collaborates with employees and volunteers remotely via Microsoft Teams; and uses Skype to teach a 3D modeling course to interns.

McClung’s focus on international aid started after he gave a tour of his backyard operation to a group of doctors from Naturopaths Without Borders, which is headquartered in Mesa. The doctors asked if McClung could help with efforts to rebuild in Haiti after the country’s devastating 2010 earthquake, so he put together a group of volunteers and traveled to the Caribbean country in 2014, teaching sustainable farming methods to locals and helping set up a rain collection system and a rooftop garden with a fish pond, goat pen, chicken coop and solar oven. He returned to Haiti two years later, building showers and toilets at a refugee camp and setting up a garden and chicken coop.

Haiti was McClung’s first experience working outside the U.S. “Ever since then,” he says, “I’ve been hooked.”

Other projects soon followed. At Golden Grove Prison in Trinidad, where inmates had been tending an enclosed garden in a field by hauling watering cans back and forth in blazing heat, McClung set up a self-irrigating water collection system and a fish pond and added vertical growing — raising plants in stacked layers instead of in the ground — to boost the garden’s production. Prison administrators were so excited about the changes that they asked for their own training session.

“They said the project served as a model for them to do the same thing on their own farms,” says Chaney St. Martin, an international specialist in water and soil management for the Inter-American Institute for Cooperation on Agriculture (IICA), which partnered with Garden Pool on the Trinidad project and several others in the Caribbean.

St. Martin, who is based in Trinidad, met McClung at a conference a few years ago. The two got talking and resolved to work together in the Caribbean. When Hurricane Irma raged through the region in September 2017, devastating several islands, they seized the opportunity to help. McClung, unencumbered by the bureaucracy of a large organization, quickly mobilized resources and arrived on the ground to work with the IICA, St. Martin says.

“It was a tremendous effort. If you understand the Caribbean context, people tend to be suspicious when outside organizations come in,” he says. “But Dennis was able to come in and blend in very easily with the culture. People really loved the work that he did.”

The tiny island of Barbuda sustained some of the worst damage from Hurricane Irma, with an estimated 90 percent of structures destroyed. The island’s only high school, Sir McChesney George Secondary, was still standing, but its agricultural operation — which included a chicken farm that provided most of the eggs eaten on the island — was mostly destroyed.

McClung partnered with the IICA and the Organization of American States to rebuild the school’s farming operation and make it resilient to future storms. He installed solar panels so the farm would no longer have to rely on the electrical grid to power its pumps, and introduced cloning buckets to produce plants from cuttings, a quicker and more reliable method than growing from seed.

He also implemented a vertical farming system using plastic rain gutters that can be easily dismantled and moved indoors if a storm is coming, then set up again afterward. The gutters are stacked above each other so water drains down to feed the plants below, and the plants are grown in coconut coir, which is sterile and retains moisture.

The changes, says Principal John Mussington, will help improve food security for the island, which has a reliance on imported products that makes it vulnerable.

“Facing the devastation of the hurricane, it was an ideal time to rethink the whole system,” he says. “What Garden Pool and IICA offered was the best option in terms of solutions going forward, knowing full well that we will be getting more storms.”

Garden Pool also donated a 3D printer and taught students and staff how to use it. The school reopened in February 2018, and Mussington says McClung’s assistance has dramatically improved its farming operations. Instead of importing costly seeds, the school now clones its own plants. Rather than waiting weeks for a fitting or other part to be ordered and delivered, the school can use its 3D printer to make it.

“Garden Pool advanced the program tremendously in terms of the approach we’re using,” Mussington says. “They helped a lot in terms of that technology transfer — doing things more efficiently and getting better production.”

That simpler approach means working with whatever materials are available, being resourceful and adapting as needed. There was almost no budget for the Trinidad prison project, McClung says, so instead of using a premade liner for the fish pond, he made one by mixing cement and sand. He built the pond’s pump from spare pipes and used some old cement blocks to create raised garden beds.

“We really had to be MacGyver on this one, because the prison really didn’t have any budget,” McClung says, laughing. “We just looked at what they had, and we got really creative.”

McClung is mostly self-taught, learning through research and a few coaches and mentors he’s met along the way. His bootstrapped background, St. Martin says, makes McClung a highly effective ambassador and teacher.

“I think because Dennis has worked in so many different areas and figured out so much on his own, because of his curiosity and interest, that helps him transmit his work better,” he says. “His excitement is very infectious, and he has the ability to relate to people on any level. He is a really genuine person who has the concern for people at the center of whatever he does.”

McClung is turning to data collection to validate and quantify his models for sustainable farming. He’s working with governments in countries where Garden Pool has conducted projects to collect data on farm yields, productivity and costs, and is partnering with Joel Cuello, a professor of agricultural and biosystems engineering at the University of Arizona and an expert on vertical farming, on the HoloLens project.

Using datasets from their work, McClung and Cuello plan to develop a HoloLens app that will allow users to select a food system model and scale it to a particular space. The app will tell them how much the project would cost, what materials are needed and how much it would produce. The goal is to have a prototype by the end of next year, Cuello says.

“This is going to be a powerful tool for education,” he says. “And for the private sector, it’s going to be powerful as well, because you’re able to visualize everything. It will allow you to pinpoint potential problems and challenges.”

These days, McClung is increasingly focused on international capacity development. Garden Pool’s first international office opened at the IICA in Trinidad in early October and McClung is working on a partnership proposal for Egypt. In late 2017, Garden Pool partnered with IICA and the United Nations Food and Agriculture Organization to build an aquaponics farm — combining raising fish with growing plants without soil — at an experimental base run by the Ministry of Agriculture in Nevis, which was also hit hard by Hurricane Irma. The initiative, which aims to improve food security and reduce dependence on imported foods, will be used for demonstrations and training.

McClung and his team are also working on plans for an indoor farm and community center in Puerto Rico that will produce energy, electricity, water and food. They intend to make the center’s design open source so it can be replicated elsewhere. McClung has open-sourced several inventions, including his water sanitation system and the aeroponics cloning bucket he designed. He sees information-sharing as critical to Garden Pool’s ultimate goal of promoting global food security.

“No one on this planet should be hungry with the technology available to us right now,” he says. “It’s just a matter of using it efficiently and spreading it to those who need it.

“The fact that we’re changing the world is more important to me than being rich or taking the fame and the glory for it,” McClung says. “I’d rather share the knowledge so that others can do for themselves.”