Black holes do not exist as we thought they did

On January 24, the journal Nature published an article entitled “There are no black holes.” 1 It doesn’t take much to spark controversy in the world of physics…But what does this really mean? In a brief article published on arXiv, a scientific preprint server, Stephen Hawking proposed a theory of black holes that could reconcile the principles of general relativity and quantum physics.

What is a black hole?

“According to Einstein’s theory of general relativity, a black hole is kind of cosmic central vacuum cleaner that swallows everything in its reach and lets nothing escape. It emits no radiation,” says Lamontagne.

Since it is not visible and has no boundaries as such, a black hole is classically defined by an area of space called the “event horizon,” where nothing can escape. 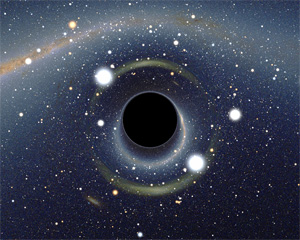 However, if we use quantum mechanics to describe a black hole, the laws of thermodynamics must apply. In this description, a black hole emits particles in the form of radiation and, ultimately, evaporates. Hawking himself predicted this in the 1970s.

“Following through with Hawking’s argument, we conclude that if there is evaporation there must be a boundary to the event horizon, a place of transition between the inside and outside of the black hole,” says Lamontagne. “A high energy envelope, a firewall, which burns up matter, is proposed.”

However, this scenario poses a problem: if the firewall exists, we should be able to see it. Furthermore, the existence of a firewall around a black hole is inconsistent with the theory of general relativity.

In search of the Holy Grail

While the two major theories, that of general relativity (a theory of gravity) and quantum mechanics (a description of the microscopic world), work well in their respective fields, they are not universal: neither can explain alone how black holes work. “The Holy Grail would be to find THEtheory that would unify the other two. And Stephen Hawking has come back with a new proposal,” says Lamontagne. Roughly, Hawking suggests that if the firewall is not visible, it is because its position fluctuates constantly and rapidly. “Hawking says, and this is purely hypothetical, that the fabric of space and time is in turmoil and we cannot define its whereabouts.”

In short, since we cannot change the principles of either quantum mechanics or general relativity, Hawking proposes to slightly modify the description of black holes.

Hence his remark that black holes do not exist the way we thought they did, as we thought we knew them.

In a “nearby” black hole

In our galaxy, black holes are less numerous than suggested by sci-fi movies. The largest black hole near us is at the center of our galaxy – the Milky Way. It is 30,000 light-years from Earth. Its mass is about one million times that of the Sun, and it occupies a space equivalent to our solar system. “We cannot see it directly but we have located it because of effects we can observe using various technological methods: it constantly deviates the trajectories of stars in its vicinity,” says Lamontagne. Moreover, in 2014, a huge cloud of gas will fall toward this “nearby” black hole. “This is exciting from an astronomical point of view because we will be able to examine the phenomenon for 10 to 20 years to come.”