Bauer studies the ways in which renewable energy from animal waste, energy crops like corn or switch grass, and even food waste can be transformed into biogas. He also has researched the effectiveness of biogas power plants and found they can be instrumental in creating clean energy for homes, businesses and transportation.

In a paper published in the Journal of Energy and Power Engineering, Bauer details his evaluation of a biogas power plant located in Frankfurt, Germany. He finds that the plant, that uses a mixture of shredded corn and cow dung, is remarkably effective in creating useable, Earth-friendly energy.

“If we want to get away from fossil fuels, we have to make sure the energy we get out of a renewable energy production system is greater than the energy we stick into it,” said Bauer, a University Distinguished Professor of physics and astronomy. “In this case, there is a huge return on investment – nearly eight to one.” 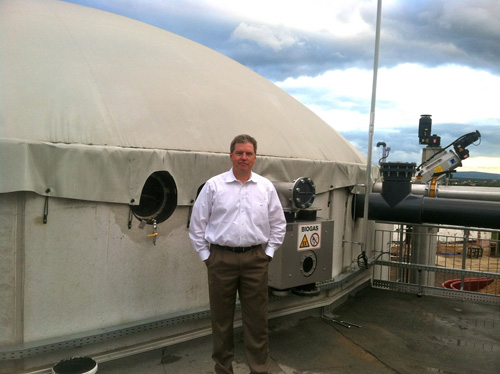 He estimates there are as many as 10,000 biogas power plants operating in the world, however, very few are in the United States. His long-term goal is for MSU to collaborate with the Michigan agricultural community to create hundreds of highly efficient and profitable biogas power plants.

The German biogas plant is similar to the anaerobic digester that MSU uses to create energy for some of its facilities on the south side of campus.

An anaerobic digester is a sealed tank, deprived of oxygen, in which organic waste is degraded at an elevated temperature. This allows the waste material to decompose quickly and produce methane that can be captured and used as fuel.

In addition, the methane gas can be turned into a liquid and used in cars. However, a car would need a conversion kit in order to burn it. 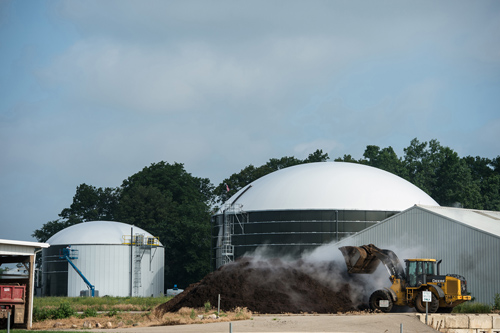 Located on the south side of MSU’s campus, this anaerobic digester produces energy to power several buildings. Similar to a biogas power plant, the digester uses natural materials such as plants and food waste to create energy. Photo by G.L. Kohuth.

Altogether, the German power plant produces about a megawatt of power. MSU’s anaerobic digester makes about a half megawatt.

“Biogas production through biological fermentation in an anaerobic digester is a viable way to convert solar energy into electricity, heat and/or transportation fuel,” Bauer concluded in his paper.