*Engineers at Brown University have designed a biological device that can measure glucose concentrations in human saliva. The technique could eliminate the need for diabetics to draw blood to check their glucose levels. The biochip uses plasmonic interferometers and could be used to measure a range of biological and environmental substances. Results are published in Nano Letters.*

PROVIDENCE, R.I. [Brown University] — For the 26 million Americans with diabetes, drawing blood is the most prevalent way to check glucose levels. It is invasive and at least minimally painful. Researchers at Brown University are working on a new sensor that can check blood sugar levels by measuring glucose concentrations in saliva instead.

The technique takes advantage of a convergence of nanotechnology and surface plasmonics, which explores the interaction of electrons and photons (light). The engineers at Brown etched thousands of plasmonic interferometers onto a fingernail-size biochip and measured the concentration of glucose molecules in water on the chip. Their results showed that the specially designed biochip could detect glucose levels similar to the levels found in human saliva. Glucose in human saliva is typically about 100 times less concentrated than in the blood.

“This is proof of concept that plasmonic interferometers can be used to detect molecules in low concentrations, using a footprint that is ten times smaller than a human hair,” said Domenico Pacifici, assistant professor of engineering and lead author of the paper published in Nano Letters, a journal of the American Chemical Society. 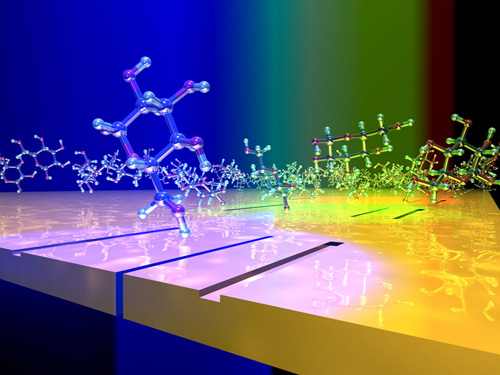 Each plasmonic interferometer – thousands of them per square millimeter – consists of a slit flanked by two grooves etched in a silver metal film. The schematic shows glucose molecules “dancing” on the sensor surface illuminated by light with different colors. Changes in light intensity transmitted through the slit of each plasmonic interferometer yield information about the concentration of glucose molecules in solution. Image credit: Domenico Pacifici

The technique can be used to detect other chemicals or substances, from anthrax to biological compounds, Pacifici said, “and to detect them all at once, in parallel, using the same chip.”

To create the sensor, the researchers carved a slit about 100 nanometers wide and etched two 200 nanometer-wide grooves on either side of the slit. The slit captures incoming photons and confines them. The grooves, meanwhile, scatter the incoming photons, which interact with the free electrons bounding around on the sensor’s metal surface. Those free electron-photon interactions create a surface plasmon polariton, a special wave with a wavelength that is narrower than a photon in free space. These surface plasmon waves move along the sensor’s surface until they encounter the photons in the slit, much like two ocean waves coming from different directions and colliding with each other. This “interference” between the two waves determines maxima and minima in the light intensity transmitted through the slit. The presence of an analyte (the chemical being measured) on the sensor surface generates a change in the relative phase difference between the two surface plasmon waves, which in turns causes a change in light intensity, measured by the researchers in real time.

“The slit is acting as a mixer for the three beams — the incident light and the surface plasmon waves,” Pacifici said.

The engineers learned they could vary the phase shift for an interferometer by changing the distance between the grooves and the slit, meaning they could tune the interference generated by the waves. The researchers could tune the thousands of interferometers to establish baselines, which could then be used to accurately measure concentrations of glucose in water as low as 0.36 milligrams per deciliter.

“It could be possible to use these biochips to carry out the screening of multiple biomarkers for individual patients, all at once and in parallel, with unprecedented sensitivity,” Pacifici said.

The engineers next plan to build sensors tailored for glucose and for other substances to further test the devices. “The proposed approach will enable very high throughput detection of environmentally and biologically relevant analytes in an extremely compact design. We can do it with a sensitivity that rivals modern technologies,” Pacifici said.

Tayhas Palmore, professor of engineering, is a contributing author on the paper. Graduate students Jing Feng (engineering) and Vince Siu (biology), who designed the microfluidic channels and carried out the experiments, are listed as the first two authors on the paper. Other authors include Brown engineering graduate student Steve Rhieu and undergraduates Vihang Mehta, Alec Roelke.

The National Science Foundation and Brown (through a Richard B. Salomon Faculty Research Award) funded the research.