*A 33,000-year-old dog skull unearthed in a Siberian mountain cave presents some of the oldest known evidence of dog domestication and, together with an equally ancient find in a cave in Belgium, indicates that modern dogs may be descended from multiple ancestors.*

If you think a Chihuahua doesn’t have much in common with a Rottweiler, you might be on to something.

An ancient dog skull, preserved in a cave in the Altai Mountains of Siberia for 33,000 years, presents some of the oldest known evidence of dog domestication and, together with equally ancient dog remains from a cave in Belgium, indicates that domestication of dogs may have occurred repeatedly in different geographic locations rather than with a single domestication event.

In other words, man’s best friends may have originated from more than one ancient ancestor, contrary to what some DNA evidence previously has indicated. 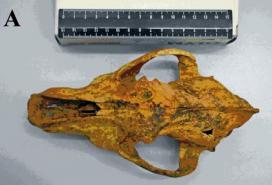 The 33,000-year-old skull of a domesticated dog was extraordinarily well preserved in the Razboinichya cave in the Altai Mountains of Siberia. (Image courtesy of Greg Hodgins)

“Both the Belgian find and the Siberian find are domesticated species based on morphological characteristics,” said Greg Hodgins, a researcher at the University of Arizona’s Accelerator Mass Spectrometry Laboratory and co-author of the study that reports the find.

“Essentially, wolves have long thin snouts and their teeth are not crowded, and domestication results in this shortening of the snout and widening of the jaws and crowding of the teeth.”

The Altai Mountain skull is extraordinarily well preserved, said Hodgins, enabling scientists to make multiple measurements of the skull, teeth and mandibles that might not be possible on less well-preserved remains. “The argument that it is domesticated is pretty solid,” said Hodgins. “What’s interesting is that it doesn’t appear to be an ancestor of modern dogs.” 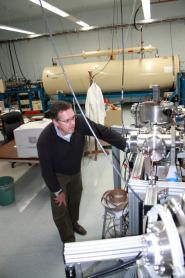 Radioactive carbon, or carbon-14, is one of three carbon isotopes. Along with naturally occurring carbon dioxide, carbon-14 reaches the surface of the Earth by atmospheric circulation, where plants absorb it into their tissues through photosynthesis.

Animals and humans take in carbon-14 by ingesting plants or other animals that have eaten plants. “Carbon-14 makes it into all organic molecules,” said Hodgins. “It’s in all living things.”

“People from all over the world send our laboratory samples of organic material that they have dug out of the ground and we measure how much carbon-14 is left in them. Based on that measurement, and knowing the radiocarbon half-life, we calculate how much time must have passed since the samples had the same amount of carbon-14 as plants and animals living today.”

The researchers use a machine called an accelerator mass spectrometer to measure the amount of radioactive carbon remaining in a sample. The machine works in a manner analogous to what happens when a beam of white light passes through a prism: White light separates into the colors of the rainbow.

The accelerator mass spectrometer generates a beam of carbon from the sample and passes it through a powerful magnet, which functions like a prism. “What emerges from it are three beams, one each of the three carbon isotopes,” said Hodgins. “The lightest carbon beam, carbon-12, bends the most, and then carbon-13 bends slightly less and carbon-14 bends slightly less than that.”

A profile of the Siberian dog skull shows the shortened snout and crowded teeth that helped scientists determine this ancient animal was domesticated. (Image courtesy of Greg Hodgins)

At 33,000 years old, the Siberian skull predates a period known as the Last Glacial Maximum, or LGM, which occurred between about 26,000 and 19,000 years ago when the ice sheets of Earth’s last ice age reached their greatest extent and severely disrupted the living patterns of humans and animals alive during that time. Neither the Belgian nor the Siberian domesticated lineages appear to have survived the LGM.

However, the two skulls indicate that the domestication of dogs by humans occurred repeatedly throughout early human history at different geographical locations, which could mean that modern dogs have multiple ancestors rather than a single common ancestor.

“In terms of human history, before the last glacial maximum people were living with wolves or canid species in widely separated geographical areas of Euro-Asia, and had been living with them long enough that they were actually changing evolutionarily,” said Hodgins. “And then climate change happened, human habitation patterns changed and those relationships with those particular lineages of animals apparently didn’t survive.”

“The interesting thing is that typically we think of domestication as being cows, sheep and goats, things that produce food through meat or secondary agricultural products such as milk, cheese and wool and things like that,” said Hodgins.

“Those are different relationships than humans may have with dogs. The dogs are not necessarily providing products or meat. They are probably providing protection, companionship and perhaps helping on the hunt. And it’s really interesting that this appears to have happened first out of all human relationships with animals.”