California is showing the way for the rest of the nation in terms of reducing greenhouse gas emissions, having set an ambitious goal to reduce these emissions to 80 percent below 1990 levels by the year 2050. Given that energy demand is projected to double by 2050, experts agree that the state will have to dramatically overhaul its energy systems to achieve its greenhouse gas emission goals.

At the 2011 Annual Meeting of the American Association for the Advancement of Science, some of the specific challenges and issue ahead were discussed in a session titled “Portraits of the California Energy System in 2050: Cutting Emissions by 80 Percent.” Contributing to this discussion were two scientists from Berkeley Lab and one from the Energy Biosciences Institute (EBI), in which Berkeley Lab is a partner.

James McMahon, who heads the Energy Analysis Department in Berkeley Lab’s Environmental Energy Technologies Division, led off the discussion with a presentation titled “Holding the Line on Energy Demand.” In his talk, McMahon noted that discussions about energy tend to focus almost entirely on supply.

“Not enough attention is paid to the demand side of the equation,” McMahon said, “And yet reducing energy demand is necessary as a prerequisite for all energy supply alternatives.”

Given that growth in the state’s population and economy will drive the demand for energy sharply upward, the key to managing the demand side is to increase the efficiency of our energy use. This, McMahon said, is likely to require a switch from fossil fuels to low-carbon electricity, especially in the buildings and industry sectors. 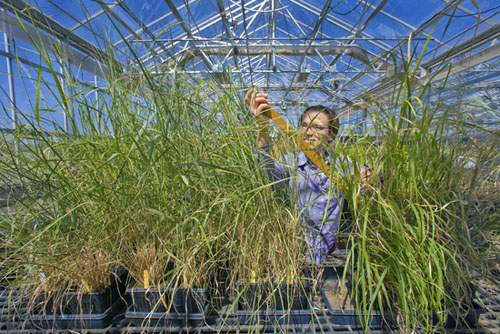 McMahon presented various strategies for reducing the energy demands of buildings and industry, particularly the oil and gas refining, and the food industries, which together account for more than three quarters of industrial energy use in the state. In all cases, modifying behavior was cited as an important strategy for reducing demand. This includes such modest behavioral changes as less reliance on electronic and mechanical devices for entertainment and minor tasks, and a convergence of electronic products to reduce the total number of display screens required.

“Solutions are technologically feasible and most of these are commercially available in 2011,” McMahon said.

In this talk, Greenblatt reaffirmed the need for low-carbon electricity if California’s greenhouse gas emissions goals for 2050 are to be met. Low-carbon electricity options include renewables, nuclear, and fossil fuels in combination with carbon capture and sequestration.

Complicating these challenges is what Greenblatt termed the “load-balancing triangle,” which he portrayed as the need to balance emission-reduction strategies with the cost and difficulty of implementing these strategies.

“As the state makes critical choices to change its energy system, it needs a clear understanding of the technical potential and risks of various energy choices,” Greenblatt said. “Meeting these goals will have implications for energy efficiency, renewable energy, energy transmission and distribution, electricity generation, fuels, and land use.”

The challenges for low carbon electricity through renewables – wind, solar, biomass, geothermal and hydroelectric – include intermittency issues that raise the total amount of electricity which must be generated and transmitted, and, as a result, require vast amounts of grid storage. For nuclear electricity, in addition to disposal of radioactive waste, the major challenge is public acceptance.

“It only takes one wrong move and the nuclear electricity option will be completely off the table,” Greenblatt said.

For the use of fossil fuels in combination with carbon capture and sequestration, the most fundamental challenge is finding where to safely sequester the carbon if you do manage to effectively capture it.

“Carbon sequestration technology is questionable and needs a lot more development before it can be implemented,” Greenblatt said. “Saline aquifers have been proposed as carbon storage sites but the viability of this option has yet to be verified.”

Furthermore, he noted, to handle the millions of tons of carbon dioxide that will be generated each year, “We will need a massive new carbon dioxide pipeline infrastructure.”

The second part of Greenblatt’s talk, “Putting Together an Energy System Portrait for California,” featured a “Punch-Down” diagram with four areas in which action must be taken to reduce greenhouse gas emissions – demand; efficiency; electrification; and low carbon electricity fuels.

“The goal of an 80-percent reduction in greenhouse gas emissions below 1990 levels by 2050 is a huge challenge,” Greenblatt said, “and without taking action in all four areas we’re never going to get there.”

Greenblatt first presented strategies for getting to 60-percent below 1990 greenhouse gas emission levels by 2050, a goal he described as “doable” with sufficiently aggressive actions. Such actions include a 40-percent increase in building efficiencies, a 70-percent shift to electrified heating, a 50-percent reduction in truck and aviation fuel use, significant reductions in liquid and gaseous fuels, and a doubling of today’s electricity production. Electricity would be supplied in roughly equal amounts via nuclear, natural gas and renewables.

Getting to the 80-percent reduction goal will require much more work, Greenblatt said, “but the situation is not hopeless.” Actions required include a doubling of the current supply of biomass and then the use of biomass in combination with other low carbon fuels to generate electricity. This would entail fossil fuels, such as coal, in combination with carbon capture and sequestration.

Also required would be a combination of, among other actions, Zero Emission Load Following, net-zero greenhouse gas emission biomass, hydrogen use where practical, and either a 100-percent effective carbon capture and sequestration strategy, or else the complete elimination of fossil fuel-generated electricity.

“More detailed studies of all of these strategies are needed immediately,” Greenblatt said. “Also needed are significant investments in the innovation required to achieve substantial greenhouse gas emissions in California and elsewhere.”

The Role of Biofuels

Heather Youngs is an analyst at the Energy Biosciences Institute (EBI), which is a partnership between Berkeley Lab, the University of California at Berkeley, and the University of Illinois. EBI is the world’s first research institution solely dedicated to the field of energy bioscience.

Youngs, in her talk, “Potential for Sustainable Biofuels in California: Opportunities and Issues,” stressed that while sustainable low carbon fuels are essential for meeting California’s greenhouse gas emission goals, there remain  many problematic uncertainties in the life cycle analysis of biofuels.

In meeting California’s greenhouse gas emissions goals for 2050 through low carbon fuels, we will need to balance the needs of current and future stakeholders, Youngs said. This tightrope act requires that the environmental impact of transitioning to biofuels be minimized while the state’s standard of living is maintained or increased. For example, converting land that is currently undeveloped into land for biofuel crops could result in a harmful loss of biodiversity.

In transitioning to biofuels, Youngs said we must also ensure that the use of water and nutrients is sustainable, and that the net benefits of reducing greenhouse gas emissions are based on full life cycle accounting. Keeping up the state’s standard of living during this transition will requires the maintaining or improving of such factors as economic conditions, nutritional food supply and distribution, and access to potable water.

While there are a number of barriers to implementing biofuels on a significant scale in California, the three biggest, Youngs said, are the risk aversions arising from market uncertainties; and the amount of land and water in the state that could be made available for the production of biofuel crops.

“There already exists an international market for biomass so the potential for biofuels is there,” Youngs said. “With economic incentives for new feedstock growth and conversion, plus repurposing of abandoned agricultural lands and the right incentives for more efficient water use and improved agronomic practices, a transition to biofuels in California can be done.”

The Portraits of the California Energy System in 2050: Cutting Emissions by 80 Percent session at AAAS 2011 was organized by Jane C.S. Long of Lawrence Livermore National Laboratory. Other speakers in the session were Chris Yang, the University of California, Davis, and Nathan Lewis, California Institute of Technology.