Stronger Than Steel, Novel Metals Are Moldable as Plastic

Imagine a material that’s stronger than steel, but just as versatile as plastic, able to take on a seemingly endless variety of forms. For decades, materials scientists have been trying to come up with just such an ideal substance, one that could be molded into complex shapes with the same ease and low expense as plastic but without sacrificing the strength and durability of metal.

Now a team led by Jan Schroers, a materials scientist at Yale University, has shown that some recently developed bulk metallic glasses (BMGs)-metal alloys that have randomly arranged atoms as opposed to the orderly, crystalline structure found in ordinary metals-can be blow molded like plastics into complex shapes that can’t be achieved using regular metal, yet without sacrificing the strength or durability that metal affords. Their findings are described online in the current issue of the journal Materials Today. 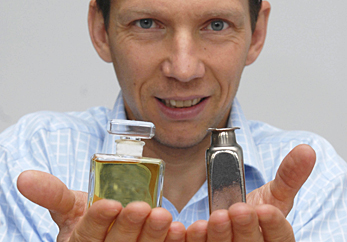 Jan Schroers and his team have developed novel metal alloys that can be blow molded into virtually any shape. Image credit: Yale University

“These alloys look like ordinary metal but can be blow molded just as cheaply and as easily as plastic,” Schroers said. So far the team has created a number of complex shapes-including seamless metallic bottles, watch cases, miniature resonators and biomedical implants-that can be molded in less than a minute and are twice as strong as typical steel.

The materials cost about the same as high-end steel, Schroers said, but can be processed as cheaply as plastic. The alloys are made up of different metals, including zirconium, nickel, titanium and copper.

The team blow molded the alloys at low temperatures and low pressures, where the bulk metallic glass softens dramatically and flows as easily as plastic but without crystallizing like regular metal. It’s the low temperatures and low pressures that allowed the team to shape the BMGs with unprecedented ease, versatility and precision, Schroers said. In order to carefully control and maintain the ideal temperature for blow molding, the team shaped the BMGs in a vacuum or in fluid.

“The trick is to avoid friction typically present in other forming techniques,” Schroers said. “Blow molding completely eliminates friction, allowing us to create any number of complicated shapes, down to the nanoscale.”

Schroers and his team are already using their new processing technique to fabricate miniature resonators for microelectromechanical systems (MEMS)-tiny mechanical devices powered by electricity-as well as gyroscopes and other resonator applications.

In addition, by blow molding the BMGs, the team was able to combine three separate steps in traditional metal processing (shaping, joining and finishing) into one, allowing them to carry out previously cumbersome, time- and energy-intensive processing in less than a minute.

“This could enable a whole new paradigm for shaping metals,” Schroers said. “The superior properties of BMGs relative to plastics and typical metals, combined with the ease, economy and precision of blow molding, have the potential to impact society just as much as the development of synthetic plastics and their associated processing methods have in the last century.”

Other authors of the paper include Thomas M. Hodges and Golden Kumar (Yale University); Hari Raman and A.J. Barnes (SuperformUSA); and Quoc Pham and Theodore A. Waniuk (Liquidmetal Technologies).