In a study that holds major implications for breast cancer research as well as basic cell biology, scientists with the U.S. Department of Energy (DOE)’s Lawrence Berkeley National Laboratory (Berkeley Lab) have discovered a rotational motion that plays a critical role in the ability of breast cells to form the spherical structures in the mammary gland known as acini. This rotation, which the researchers call “CAMo,” for coherent angular motion, is necessary for the cells to form spheres. Without CAMo, the cells do not form spheres, which can lead to random motion, loss of structure and malignancy.

”What is most exciting to me about this stunning discovery is that it may finally give us a handle by which to discover the physical laws of cellular motion as they apply to biology,” says Mina Bissell, a leading authority on breast cancer and Distinguished Scientist with Berkeley Lab’s Life Sciences Division.

Bissell is a corresponding author of a paper describing this work in the Proceedings of the National Academy of Sciences (PNAS), along with Kandice Tanner, a post-doctoral physicist in Bissell’s research group. The PNAS paper is titled “Coherent angular motion in the establishment of multicellular architecture of glandular tissues.” Other authors were Hidetoshi Mori, Rana Mroue and Alexandre Bruni-Cardoso, also members of Bissell’s research group.

About the video: Berkeley Lab researchers have discovered a rotational motion in human breast cells that continues through mitosis and enables the cells and their progeny to form sphere-shaped acini.

Healthy human epithelial cells in breast and other glandular tissue form either sphere-shaped acini or tube-shaped ducts. The cell and tissue polarity (function-enabling spatial orientations of cellular and tissue structures) that comes with the formation of acini is essential for the health and well-being of the breast. Loss of this polarity as a result of cells not forming spheres is one of the earliest signs of malignancy. However, despite all that is known about cell morphogenesis, the fundamental question as to how epithelial cells are able to assemble into spheres that are similar in size and shape to organs in vivo has until now been a mystery.

“We’ve discovered a novel type of cell motility where single cells undergo multiple rotations and cohesively maintain that rotational motion as they divide and assemble into acini,” says Tanner. “We’ve also demonstrated that this CAMo is a critical function for the establishment of spherical architecture and not simply a consequence of multicellular aggregates. If CAMo is disrupted, the final geometry is not a sphere.” 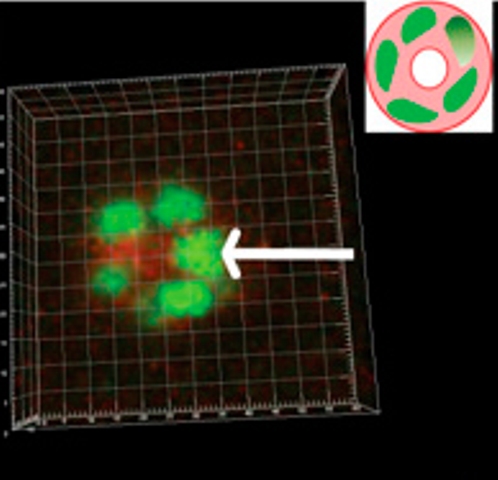 After five days of mitosis and CAMo, polarized breast cells have assembled into an acinar sphere with a lumen in the center (inset). Image credit: Berkeley Lab

Working with both immortalized and primary human epithelial cells, cultured in a unique 3D gel that serves as a surrogate for the basement membrane (an assay developed by Bissell and colleagues two decades ago), and using 4D live-imaging (3D plus time) confocal microscopy, Tanner, Bissell and their colleagues found that CAMo arises from a centripetal force generated by the flexing of crescent-shaped muscle-like molecules called actomyosin in the cell’s cytoskeleton. This centripetal force sets the cell to rotating about an axis. The rotation is slow, barely once an hour, it may run clockwise or counterclockwise, and its axis might shift, but this rotational motion is cohesive. It continues as the cell divides and the subsequent progeny form into acini, bestowing on cells and acini the polarity and the cavity needed for proper form and function.

Bissell is renowned for her pioneering work that elucidated the critical role in breast cancer development played by the extracellular matrix (ECM), a network of fibrous and globular proteins in the microenvironment that surrounds a breast cell. Her experiments have shown that when the nucleus of a breast cell fails to receive the proper biochemical cues and signals from the ECM and other components of the microenvironment, cells and tissue lose structure, which opens the door to malignancy. The discovery of CAMo now provides an important missing mechanism that facilitates the reception and response of a breast cell to the cues and signals from the ECM. 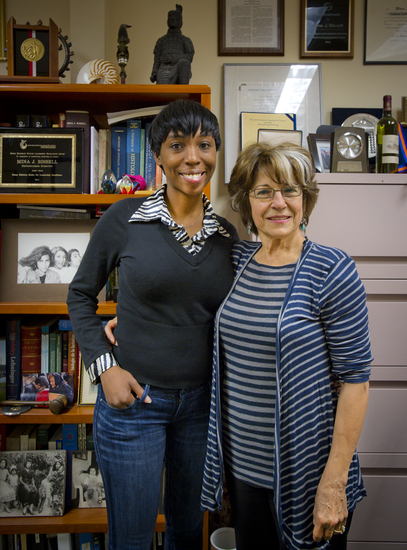 “In addition to wanting to know how a single cell and its progeny assemble into polar tissue, we also wanted to know whether cellular dynamics are corrupted by malignant transformation,” Bissell says. “In this study, we found that malignant cells do not display CAMo but instead become randomly motile and do not form spheres.”

In recent research, Bissell and her group demonstrated that through manipulation of the ECM, malignant cells cultured in an ECM enriched with laminin – a protein that they had shown induces cell quiescence – can undergo a reversion in which their normal phenotype is restored despite their malignant genome. In this new study, Tanner, Bissell and their colleagues found that when malignant cells cultured in the 3D ECM surrogate gel underwent phenotypic reversion in response to signaling inhibitors, CAMo was restored. When CAMo was restored, the reverted cancer cells formed polarized spheres.

“These results complement our early hypothesis that signaling and support by the ECM when cells are in proper context informs both form and function in cells,” Bissell says. “The results also suggest that in response to microenvironmental cues from the ECM, cells execute a program of cytoskeletal movements that dictate different kinds of motilities. We hypothesize that these motilities direct the formation of a given type of tissue and preclude other multicellular geometries. We believe this is a crucial evolutionary phenomena for multicellular organisms.”

In this new study, Tanner and Bissell and their colleagues were surprised to observe a significant delay between the second and third round of breast cell divisions in the 3D ECM surrogate gel. This mitotic delay is similar to the mitotic delay that’s been observed during human blastocyst formation and is critical for normal embryogenesis. Tanner says the delay is probably necessary for the progeny to acquire sufficient adhesion so that the CAMo can be maintained for the adhere cells. This finding may provide a possible explanation for how the mammary gland reorganizes after each pregnancy and involution.

“Once the cells are sufficiently adhered to one another, they can continue CAMo as a cohesive unit,” Tanner says. “We postulate that this cohesive CAMo motility is the mechanism by which the original structure of the breast tissue is restored following lactation and breast feeding.”

The next step for the research team will be to study the effects of CAMo from the perspective of the ECM.

“We would like to look at the interaction of the ECM with a single cell as it undergoes CAMo and show the in vivo relevance,” Tanner says.

This research was supported by the U.S. Department of Defense Breast Cancer Program, the National Cancer Institute and the DOE Office of Science.