The U.S. Department of Energy’s Lawrence Berkeley National Laboratory has been chosen to lead a consortium for a U.S.-China Clean Energy Research Center on Building Energy Efficiency. The Center will develop technologies for low-energy residential and commercial buildings, as well as work on commercialization of those technologies and research how human behavior affects building energy use.

The consortium also includes contributions from a number of industrial partners—Dow Chemical Company, General Electric, Honeywell, Schneider Electric, Saint-Gobain, Bentley, Pegasus Investment Advisors and Climate Master—as well as several other organizations. Together they have committed more than $16 million in in-kind resources (primarily research staff) and cash over a five-year period.

“The U.S.-China Clean Energy Research Center will help to save energy and cut costs in buildings in both the United States and China,” said Assistant Secretary of Energy for Policy and International Affairs David Sandalow. “This new partnership will also create new export opportunities for American companies, ensure the United States remains at the forefront of technology innovation and help to reduce global carbon pollution.” 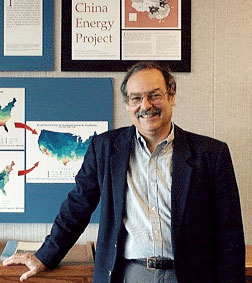 Numerous studies have concluded that dramatic energy savings are possible through more energy-efficient buildings—savings on the order of 40 percent for existing buildings and 60 to 70 percent for new buildings. The need is especially acute in China, which has been building up its cities at an astonishing rate. The pace is expected to continue for the next several decades as urbanization continues. That means China will be building new homes, roads and infrastructure for hundreds of millions of rural-dwellers moving to the cities over the next 40 years or more.

“Energy efficiency in buildings has the greatest potential for reducing greenhouse gas emissions in the next two decades of any energy sector,” says Berkeley Lab scientist Mark Levine, the leader of the consortium. “This collaboration between China and the United States can lead the way in demonstrating the great opportunities for and benefits of cooperation between nations in addressing greenhouse gas emissions.”

Levine founded Berkeley Lab’s China Energy Group more than 20 years ago and has worked closely with Chinese government and industrial leaders in that time, analyzing and promoting energy efficiency in China. The scientists of the China Energy Group have participated in the development of appliance standards and labeling, a benchmarking tool for cement and other industries to identify and implement energy-efficiency options and the development of tools and policies to reduce energy in buildings.

Both Oak Ridge and Berkeley Lab are recognized leaders in energy efficient buildings, having conducted hundreds of millions of dollars of research in the field in the past decade. On top of that, Berkeley Lab has been awarded more than $32 million in funding through the American Recovery and Reinvestment Act for work on energy-efficient buildings, including $15.9 million to build a national user facility containing a series of test beds for researchers to test and optimize various systems.

Subject to agreement with the Chinese partners, the six major research areas to be undertaken are: advanced monitoring and control systems, advanced glazing materials and systems, advanced insulation systems, cool roofs, lighting and commercialization and policy analyses. Some examples of technologies the Center will work on include low-cost insulation, especially for rural areas, which has the potential to substantially reduce coal use in northern China, and computer tools for evaluating window performance under different conditions and building configurations, to be applied in two cities in China and two in the United States.

Additionally, the Center will build a test bed facility for evaluating the performance of technologies and systems developed by the researchers. The facility will be located at a one-story building at a partner organization in China, such as a university. The test bed could become a long-term research facility to be used by generations of building energy engineers and scientists.

President Obama and President Hu Jintao formally announced the establishment of the CERC during the President’s trip to Beijing last November.