Bats: Virtually a model of flight

“Virtual Reality Design for Science” is a co-listed class at Brown and RISD that unites artists, designers, computer scientists, and experts in scientific visualization. The goal: to create tools for immersive interaction with scientific data. Test case for the course: the flight mechanics of bats.

PROVIDENCE, R.I. [Brown University] — If you want to get a good look at a bat, a cave is a pretty good place to go. But on a Thursday in mid-December at Brown’s Granoff Center, there were virtual bats flapping about in a cave of a different sort.

In a class called “Virtual Reality Design for Science,” students from Brown and the Rhode Island School of Design developed interactive 3-D visualizations of bats in flight for Brown’s virtual reality environment, called the Cave. The Cave is an eight-foot foot cube with stereo images projected on three walls and the floor, creating an immersive virtual environment. The 15 students in the class had gathered to show off their creations for onlookers outfitted with 3-D glasses.

The aim of the class, which is cross-listed at Brown and RISD, is to introduce students to virtual reality as a means of creating tools for scientific analysis. The class is co-taught by David Laidlaw and Sharon Swartz from Brown, and Fritz Drury from RISD. Each brings unique expertise. Laidlaw is an expert in scientific visualization and computational modeling. Drury is a painter and professor in RISD’s illustration department. Swartz, professor of biology and engineering, studies the mechanics of bat flight.

“We’re trying to see what the capacity of [virtual reality] is to develop art- and design-inspired tools for science,” Laidlaw said. The hope, he said, is to “build a community of folks who might see a different path toward involving themselves in the sciences by blending the arts and sciences.” 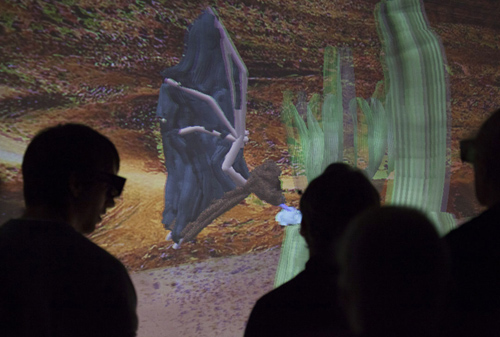 Modeling modes of flight. The Mexican Long-Nosed Bat, whose flight mechanics are being modeled in virtual reality, can both fly forward and hover hummingbird-like at a flower while lapping nectar. Image credit: Mike Cohea/Brown University

Using what they learned about bat flight from Swartz, the students sculpted their visualizations with CAVE Painting, an application that enables users to “paint” images in 3-D space around them. The interactive animations modeled various aspects of bats in flight — the movement of bones, the activation of muscles, and the movement of air around the wings. The idea was to give scientists a means of visualizing these things in an immersive way that wouldn’t otherwise be possible. Animations can stop or reverse. Motion tracking technology tracks the user’s head movements and changes the perspective on the environment accordingly.

The advantages to this kind of visualization are many, according to Laidlaw.

“First, it brings scale — [the visualizations] are big,” he said. “It also brings body-oriented navigation. The thing doesn’t have to move; you can move. If you can move all around the object then you can study it in a way that’s different than if you have to pick it up and turn it around or look at it on a flat screen. You can use your mental map of the world and build a mental map of this object.”

One project by Timothy Parsons, a senior computer science student, looked at the motion of Mexican Long-Nosed Bats. The Mexican Long-Nose is a nectar feeder, which means it can hover as well as fly forward. Parsons’ project compared those two modes of flight, demonstrating differences in airflow between the two. He showed that air vortices generated by the wings spin off the wing as the bat moves forward, but during hovering flight they stick to the wing, creating lower air pressure above the wing and more lift.

Parsons said the class has spurred him to do more work in virtual reality.

“I’ve definitely felt some inspiration to do more with the Cave,” he said. “I also loved the interdisciplinary approach the course took. I learned a lot about art from Professor Drury and all the incredibly talented students from RISD who were in the class. And of course I learned a ton about bat flight from Professor Swartz.” 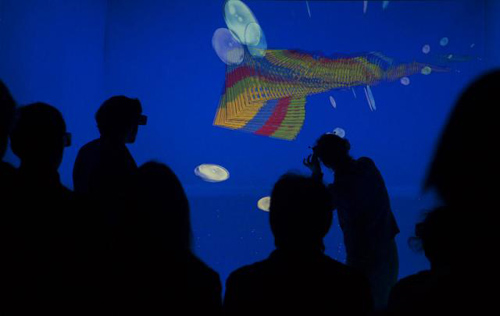 A visual je ne sais quoi. “There’s some ineffable something about (virtual reality),” a researcher said. “A photograph doesn’t quite capture it. A movie or an animation doesn’t capture it. I don’t know what that is. That’s part of why I’m building a new Cave. I want to study that.” Image Credit: Mike Cohea/Brown University

Connor Gramazio, a computer science graduate student and another member of the class, was similarly struck by its interdisciplinary nature.

“I’d been looking at visualization through an engineering and scientific perspective,” he said. “The cool thing about this class was that it was co-listed at RISD and Brown. So I was interested in a different view on visualization. What do artists and designers think visualization is? Can I grow my perspective on it?”

The visualizations the students created for the class are not quite ready for use by scientists at this point. An application that interpolated all the data generated by a bat’s flapping wing might take years to produce. Rather, the projects were conceptual pieces designed to demonstrate the potential of immersive technology for scientific study. The work also gave the students a chance to work closely with a scientist and tailor their application to what a scientist might need. In addition to teaching the students about the mechanics of bat flight to create the visualizations, Swartz also played the role of the “end user” — a scientist who might use the application to visualize data. That gave the students exposure to the iterative process of creation and revision needed to build a useful application.

“Sharon could say, ‘There are too many button presses needed to do this,’ or ‘That isn’t quite what I wanted,’ or ‘This isn’t how I wanted to get to that thing,’” Laidlaw said. “So that gave the students an opportunity to go through that iterative process.”

This is the fourth time the class has been offered at Brown. Laidlaw looks forward to teaching it again in Brown’s new Cave, which is under construction now. The new Cave will have twice the area, 25 times the resolution, and a 360-degree display, compared to the current Cave’s 270 degrees.

“There’s some ineffable something about [virtual reality],” Laidlaw said. “A photograph doesn’t quite capture it. A movie or an animation doesn’t capture it. I don’t know what that is. That’s part of why I’m building a new Cave. I want to study that.”