ANN ARBOR, Mich.— In these lean times, smart consumers refuse to pay a lot for throwaway items, but will shell out a little more for products that can be used again and again. The same is true of bacteria and other microbes, researchers at the University of Michigan have learned.

These organisms “spend” more on proteins that will be used and recycled internally than on proteins that are secreted from the cell and lost to the environment, said graduate student Daniel Smith, lead author of a paper published online in the open access journal mBio.

Proteins are made up of building blocks called amino acids, which vary in size, complexity and chemical characteristics. These differences make some amino acids cheaper for cells to produce than others. Proteins made of mostly cheap amino acids are therefore less costly to the organism than are proteins composed of more energetically expensive amino acids. This much is obvious, but the connection between a protein’s location and its expense has not been appreciated until now.

Smith became interested in protein economics while studying a bacterial protein called CsgA, a major component of curli (fibers that decorate the surfaces of E. coli and certain other bacteria and are thought to be involved in causing illness). CsgA is rich in glycine, a cheaply produced amino acid, so CsgA also should be inexpensive for bacteria to produce. But exactly how cheap? 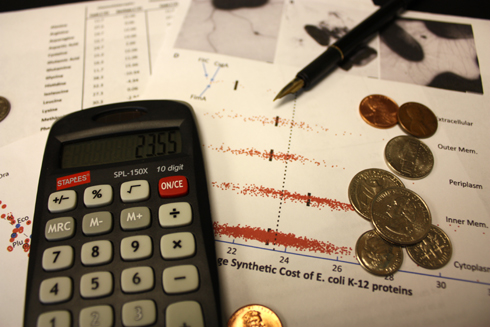 About the image: Some proteins cost more (in terms of energy) for cells to produce than others. The bacterium Escherichia coli ‘spends’ more on proteins that will be used and recycled internally than on proteins that are secreted from the cell and lost to the environment. Image credit: Daniel R. Smith

To find out, Smith and co-author Matthew Chapman, an associate professor of molecular, cellular and developmental biology, first looked up previously tallied synthetic costs of all amino acids found in proteins. They used those figures to calculate the total cost of each E. coli protein; then for each protein, they divided total cost by the number of amino acid subunits in the protein to arrive at an average cost.

“When we compared all the proteins in E. coli, we found that CsgA was an outlier,” Smith said. “It was one of the cheapest to produce.”

That finding makes sense from the bacterium’s point of view.

“If you’re making lots of curli fibers outside your cell, that’s going to be a huge economic cost,” Smith said. “If you can reduce that cost, then you can out-compete your neighbors—you’re better adapted.”Although most of E. coli’s proteins are internal, the results showed that the majority of its cheap proteins are found on the outside. Again, this makes biological sense, Smith said.

Smith and Chapman checked their results by using several different measures—chemical energy, mass, carbon content—to calculate protein cost. The conclusion was always the same: extracellular proteins are more economical. In fact, a protein’s location is a better predictor of its economy than its abundance, function or size.

The bugs’ thrifty ways add up to big savings. Looking just at the proteins found in the flagellum—a tail-like, rotating external structure that some bacteria use to propel themselves through liquids—Smith and Chapman calculated that the energy saved is enough to rotate the flagellum for 24 minutes.

“Considering the expected doubling time of an E. coli cell, that is like getting free fuel for life,” Smith said.

E. coli, it turns out, is not the only microbial miser. The researchers performed similar protein economy calculations for a wide range of bacteria, as well as for yeast, and found the same trend: proteins secreted to the extracellular environment are made up of cheaper-to-produce parts than are proteins found inside the cell.

Of course, it isn’t individual bacteria and yeast that are deciding what to spend on the proteins they produce. Their tightwad tendencies have been shaped by natural selection.

“Evolution has to balance function and cost,” Chapman said. “Function is most important—if an organism makes a cheap protein that doesn’t function efficiently, that’s a waste. But if an amino acid substitution reduces metabolic cost without affecting function, that will improve the organism’s evolutionary fitness.”