At a Loss for Words

*Research into aphasia – the inability to speak or write well-formulated sentences and words – is strong at the UA. Researchers have received $2 million toward the study of the condition.*

The National Institutes of Health have awarded the University of Arizona’s Aphasia Research Project in the department of speech, language and hearing sciences a $2 million grant to research communication impairments in adults who have suffered brain injury.

Aphasia – the inability to speak or write well-formulated sentences and words – is a common result of a stroke or a traumatic brain injury such as the one suffered by Rep. Gabrielle Giffords, who was shot in the head earlier this year. The bullet damaged regions of the brain that are critical for language and control of the right side of the body.

Brain scan images from two individuals showing damage in different regions of the brain. The damage shown on the left causes difficulty recalling the relation between letters and sounds. In contrast, the person with the damage shown on the right has difficulty remembering the spellings of specific words. The course of treatment for these two individuals will be quite different. Image credit: Pélagie Beeson

While Giffords continues to work on her speech and language recovery, she is not alone. About 1 million people suffer from aphasia, according to the National Aphasia Association. Most commonly, aphasia occurs in patients who have suffered a stroke.

“In Pima County, that’s about 3,000 people,” said Pélagie Beeson, professor and head of the University of Arizona’s department of speech, language and hearing sciences. “It’s surprising when you realize how common it is, yet very few people are familiar with the word ‘aphasia.'”

Beeson and her colleagues in the department’s Aphasia Research Lab help people with aphasia regain their ability to speak and write. They work one-on-one with patients as they relearn how to spell and recognize words, form coherent sentences, and relearn the sounds that are associated with a particular letter, both in spoken and written form.

Recognized as one of the top programs for speech-language pathology in the nation, aphasia studies is one of the recognized strengths at the UA.

The recent grant supports research to develop and test treatments to maximize language recovery after brain damage. The research involves working with patients directly, but also the use of neuroimaging to better understand how the brain works and the mechanisms of recovery. 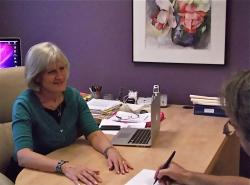 An essential component of the aphasia research is to image a patient’s brain to know where the damage is and how that correlates with the language impairment.

“The language impairment is a reflection of where the damage is,” Beeson said. “There are some typical problems associated with damage in one area versus another. Rehabilitation involves strengthening the skills that are weak and engaging regions of the brain that are still healthy.”

Researchers have shown that language engages a network of brain regions that work together. UA researchers have published studies that confirm critical regions involved in written language by studying healthy individuals while they read or write as they lie in a magnetic resonance imaging, or MRI, scanner.

This type of brain imaging shows characteristic patterns of brain activation for a given task. The approach complements the study of the consequences of brain damage to those regions.

Research conducted by the Aphasia Research Lab explores how to best facilitate recovery. “A unique aspect of our treatment approach is the attention to written, as well as spoken, language,” said Beeson. “We find that writing can sometimes facilitate improvement in spoken language. And in some cases, the rehabilitation of reading and writing difficulties is the primary concern.”

Research conducted by Beeson and her colleagues, Steven Rapcsak from the UA department of neurology, and Kindle Rising, a research speech-language pathologist, confirms that damage to one region of the left side of the brain impairs the ability to manipulate sounds and relate them to the appropriate letters, whereas damage to another region brain results in a loss of word recognition and spelling.

Aphasia patients undergo speech and writing treatment sequences that last 10 to 12 weeks each. Treatment varies from one patient to the next based on their language impairment and involves the retraining of spelling, sound-to-letter recognition, and the use of writing to improve the spoken language. The response to one treatment sequence determines the focus of the next sequence.

One particular patient, for example, suffered from a loss of phonology, the ability to recognize which sounds correlate with the different parts of a word. If told to write down the word “fire,” the patient had difficulty recognizing that “fire” is spelled with an “f.”

“There is a loss of skills that were learned at a very young age, that specific sounds are associated with certain letters,” said Beeson. “So we re-train the association between sounds and letters, like ‘fire,’ you write it with an ‘f.’  The benefits of strengthening this fundamental phonological skill is striking in some cases, resulting in marked improvement in writing at the sentence level.”

Another technique is relearning how to spell words. This requires daily homework and can be extremely useful to improve everyday communication. The improved writing is often accompanied by an improved spoken language as well.

Patients involved with the UA Aphasia Research Lab have learned about the program from their physicians and other speech-language pathologists, and often from word of mouth.

“We work with many people from the community,” said Beeson. “This is federally funded research, so the goal is to impact the quality of service in the whole country.”