Astrophysicists at the University of Arizona and elsewhere have found evidence of black holes destroying stars, a long-sought phenomenon that provides a new window into general relativity.

The research, reported in the latest issue of the Astrophysical Journal, also opens up a method to search for the possible existence of a large population of presently undetectable “intermediate mass” black holes, which are hypothesized to be precursors to the super-massive black holes at the centers of most large galaxies.

Cosmologists have calculated that, on occasion, a star’s orbit will be disturbed in such a way that it passes very near the super-massive black hole at the center of its galaxy – but not so close that it is captured whole. 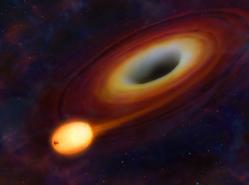 This is an artist's impression of a star being torn apart by a massive black hole in a violent act called tidal disruption. (Illustration by Mark A. Garlick/University of Warwick)

Such a star will be torn apart by the extreme tidal forces it experiences: The force of gravity on the near side of the star is so much stronger than that on the far side that the gravitational force holding the star together is overwhelmed, causing the star to simply come apart.

While some of the star’s matter falls into the black hole, much of it continues in chaotic orbits, crashing into itself and producing intense radiation lasting days to months. These phenomena are called stellar tidal disruption flares, or TDFs.

Although discovering evidence of TDFs has been a high priority of astrophysicists for many years, and several possible examples have been found using X-ray and UV satellites, discovering TDFs in a large-scale, systematic survey using ground-based optical telescopes as has now been achieved, is critical to controlling bias and avoiding misidentifications.

The difficulty in detecting TDFs is largely because of the challenge of distinguishing them from more common types of flares such as supernovae. (For every TDF there are about 1000 supernovae.)

In addition, some super-massive black holes have an “accretion disk” surrounding them – gas and dust, often left from an earlier merger with another galaxy – which is continuously feeding the hole. Such accreting black holes are usually evident from the bright emission they produce and are known as quasars or Active Galactic Nuclei.

However, a hiccup in the accretion of an undetected active black hole could produce a flare that might be mistakenly identified as a TDF.

The researchers on the Astrophysical Journal study uncovered sound evidence for the presence of two TDFs through a rigorous analysis of archival data from the Sloan Digital Sky Survey, or SDSS.

To do so, they sifted through voluminous SDSS data in which more than 2 million galaxies were repeatedly observed over 10 years. By very carefully registering the images and looking at differences between consecutive images, they obtained a sample of 342 intense and well-measured flares.

Of these, almost all could be classified into supernovae and AGN flares. However, two cases were left that did not fit either classification. By relying on multi-year observations, the researchers could see that the two flares’ host galaxies showed no other flaring activity, as would be the case if the flares came from a hidden variable AGN. This means the possibility these two flares were produced by undetected AGNs is extremely small.

In addition, the researchers located these flares at the nucleus of their galaxy with high precision, which reduces the likelihood that they are supernovae to less than 1 percent since supernovae are randomly distributed through galaxies.

Finally, the properties of these flares are very different from flares of AGNs and supernovae – and their spectra are unlike any supernovae observed to date. Supernovae flares are characteristically very blue at first but become red as they cool and rapidly decay, whereas the TDF flares are very blue throughout – slowly decaying without changing color.

This behavior is consistent with expectations for a TDF – the debris from the star should rapidly form an accretion disk and look like a short-lived AGN.

“Much of the focus of the investigation was eliminating alternative possible scenarios for the transient events found in the original SDSS data,” explained Dennis Zaritsky, a professor of astronomy at the UA’s Steward Observatory who is a co-author on the report.

“Using the UA’s access to the twin 6.5-meter Magellan telescopes in Chile, we obtained data that confirmed that the galaxies hosting these two remaining unexplained transient events were neither actively forming stars nor the hosts of massive, central black holes that are continually accreting material (active galactic nuclei or AGN), thereby eliminating a number of alternative interpretations.”

The study’s lead author is Sjoert van Velzen, who was a first-year graduate student at New York University at the time, and is now completing his docorate at Radboud University in the Netherlands.

About his first encounter with real scientific work, van Velzen said, “Searching through 2.6 million galaxies was actually a lot of fun – there is so much to discover. Based on our search criteria and observing two TDFs that met those criteria, the rate of TDFs is about once per 100,000 years, per galaxy. It’s quite thrilling to have been able to make such a measurement.”

“The next step is to develop models to explain in detail the flares’ properties and duration, and address the question of whether TDFs could be responsible for producing Ultrahigh Energy Cosmic Rays, whose sources have been elusive up to now,” said Glennys Farrar, van Velzen’s doctoral adviser.

Farrar is a professor of physics at NYU’s Center for Cosmology and Particle Physics and senior scientist of the project.

*Source: The University of Arizona.