Asteroid that Killed the Dinosaurs also Wiped out the ‘Obamadon’

The asteroid collision widely thought to have killed the dinosaurs also led to extreme devastation among snake and lizard species, according to new research — including the extinction of a newly identified lizard Yale and Harvard scientists have named Obamadon gracilis.

“The asteroid event is typically thought of as affecting the dinosaurs primarily,” said Nicholas R. Longrich, a postdoctoral associate with Yale’s Department of Geology and Geophysics and lead author of the study. “But it basically cut this broad swath across the entire ecosystem, taking out everything. Snakes and lizards were hit extremely hard.”

The study was scheduled for online publication the week of Dec. 10 in the Proceedings of the National Academy of Sciences.

Earlier studies have suggested that some snake and lizard species (as well as many mammals, birds, insects and plants) became extinct after the asteroid struck the earth 65.5 million years ago, on the edge of the Yucatan Peninsula. But the new research argues that the collision’s consequences were far more serious for snakes and lizards than previously understood. As many as 83 percent of all snake and lizard species died off, the researchers said — and the bigger the creature, the more likely it was to become extinct, with no species larger than one pound surviving.

The results are based on a detailed examination of previously collected snake and lizard fossils covering a territory in western North America stretching from New Mexico in the southwestern United States to Alberta, Canada. The authors examined 21 previously known species and also identified nine new lizards and snakes.

They found that a remarkable range of reptile species lived in the last days of the dinosaurs. Some were tiny lizards. One snake was the size of a boa constrictor, large enough to take the eggs and young of many dinosaur species. Iguana-like plant-eating lizards inhabited the southwest, while carnivorous lizards hunted through the swamps and flood plains of what is now Montana, some of them up to six feet long.

“Lizards and snakes rivaled the dinosaurs in terms of diversity, making it just as much an ‘Age of Lizards’ as an ‘Age of Dinosaurs,'” Longrich said. 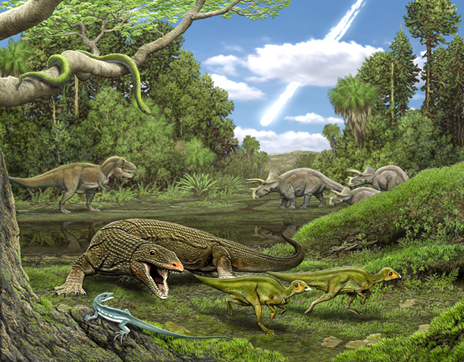 In the foreground, the carnivorous lizard Palaeosaniwa stalks a pair of hatchling Edmontosaurus as the snake Cerberophis and the lizard Obamadon look on. In the background, an encounter between T. rex and Triceratops. (Artwork by Carl Buell)

The scientists then conducted a detailed analysis of the relationships of these reptiles, showing that many represented archaic lizard and snake families that disappeared at the end of the Cretaceous, following the asteroid strike.

One of the most diverse lizard branches wiped out was the Polyglyphanodontia. This broad category of lizards included up to 40 percent of all lizards then living in North America, according to the researchers. In reassessing previously collected fossils, they came across an unnamed species and called it Obamadon gracilis. In Latin, odon means “tooth” and gracilis means “slender.”

“It is a small polyglyphanodontian distinguished by tall, slender teeth with large central cusps separated from small accessory cusps by lingual grooves,” the researchers write of Obamadon, which is known primarily from the jaw bones of two specimens. Longrich said the creature likely measured less than one foot long and probably ate insects.

He said no one should impute any political significance to the decision to name the extinct lizard after the recently re-elected U.S. president: “We’re just having fun with taxonomy.”

The mass (but not total) extinction of snakes and lizards paved the way for the evolution and diversification of the survivors by eliminating competitors, the researchers said. There are about 9,000 species of lizard and snake alive today. “They didn’t win because they were better adapted, they basically won by default, because all their competitors were eliminated,” Longrich said.

“One of the most important innovations in this work is that we were able to precisely reconstruct the relationships of extinct reptiles from very fragmentary jaw material. This had tacitly been thought impossible for creatures other than mammals. Our study then becomes the pilot for a wave of inquiry using neglected fossils and underscores the importance of museums like the Yale Peabody as archives of primary data on evolution — data that yield richer insights with each new era of scientific investigation.”

Jacques A. Gauthier, professor of geology and geophysics at Yale and curator of vertebrate paleontology and vertebrate zoology, is also an author.

The paper is titled “Mass Extinction of Lizards and Snakes at the Cretaceous-Paleogene Boundary.” The National Science Foundation and the Yale Institute for Biospheric Studies supported the research.