The blanket of sea ice that floats on the Arctic Ocean appears to have reached its lowest extent for 2011, the second lowest recorded since satellites began measuring it in 1979, according to the University of Colorado Boulder’s National Snow and Ice Data Center.

While this year’s September minimum extent was greater than the all-time low in 2007, it remains significantly below the long-term average and well outside the range of natural climate variability, according to scientists involved in the analysis. Most scientists believe the shrinking Arctic sea ice is tied to warming temperatures caused by an increase in human-produced greenhouse gases pumped into Earth’s atmosphere. 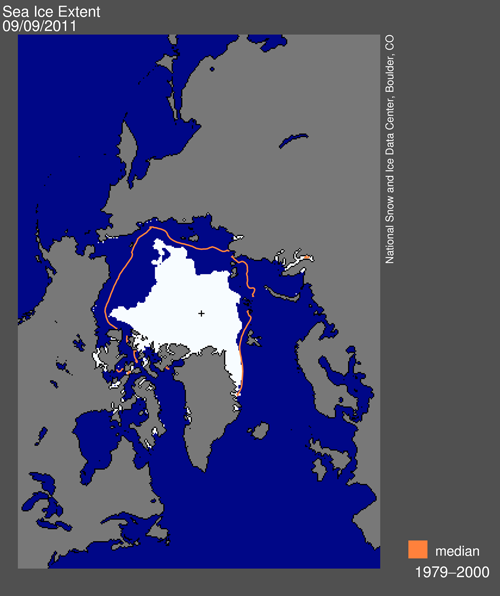 “Every summer that we see a very low ice extent in September sets us up for a similar situation the following year,” said NSIDC Director Mark Serreze, also a professor in CU-Boulder’s geography department. “The Arctic sea ice cover is so thin now compared to 30 years ago that it just can’t take a hit anymore. This overall pattern of thinning ice in the Arctic in recent decades is really starting to catch up with us.”

Serreze said that in 2007, the year of record low Arctic sea ice, there was a “nearly perfect” set-up of specific weather conditions. Winds pushed in more warm air over the Arctic than usual, helping to melt sea ice, and winds also pushed the floating ice chunks together into a smaller area. “It is interesting that this year, the second lowest sea ice extent ever recorded, that we didn’t see that kind of weather pattern at all,” he said. 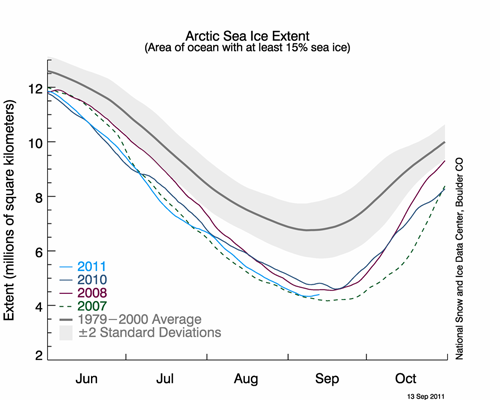 The last five years have been the five lowest Arctic sea ice extents recorded since satellite measurements began in 1979, said CU-Boulder’s Walt Meier, an NSIDC scientist. “The primary driver of these low sea ice conditions is rising temperatures in the Arctic, and we definitely are heading in the direction of ice-free summers,” he said. “Our best estimates now indicate that may occur by about 2030 or 2040.”

There still is a chance the sea ice extent could fall slightly due to changing winds or late season melt, said Meier. During the first week of October, CU-Boulder’s NSIDC will issue a full analysis of the 2011 results and a comparison to previous years.

NSIDC is part of CU-Boulder’s Cooperative Institute for Research in Environmental Sciences — a joint institute of CU-Boulder and the National Oceanic and Atmospheric Administration headquartered on the CU campus — and is funded primarily by NASA.