When NASA’s salt-seeking Aquarius instrument ascends to the heavens this June, the moon above its launch site at California’s Vandenberg Air Force Base won’t be in the seventh house, and Jupiter’s latest alignment with Mars will be weeks in the past, in contrast to the lyrics of the song from the popular Broadway musical “Hair.” Yet for the science team eagerly awaiting Aquarius’ ocean surface salinity data, the dawning of NASA’s “Age of Aquarius” promises revelations on how salinity is linked to Earth’s water cycle, ocean circulation and climate.

Salinity – the concentration of salt – on the ocean surface is a key missing puzzle piece in satellite studies of Earth that will improve our understanding of how the ocean and atmosphere are coupled and work in tandem to affect our climate. While satellites already measure sea surface temperature and winds, rainfall, water vapor, sea level, and ocean color, measurements of ocean surface salinity have, until quite recently, been limited to sparse data collected from ships, buoys and a small number of airborne science campaigns.

From those limited data, we know ocean surface salinity varies by only about five parts per thousand globally. Yet a change of just a fraction of one part per thousand can influence the circulation of the ocean. Knowing the salinity of the ocean surface can also help scientists trace Earth’s water cycle – the process that circulates freshwater from the ocean to the atmosphere to the land and back again to the ocean through rainfall, evaporation, ice melt and river runoff. Aquarius, the primary science instrument on the Aquarius/Satélite de Aplicaciones Científicas (SAC)-D spacecraft built by Argentina’s national space agency, Comision Nacional de Actividades Espaciales, will help scientists study these complex, interrelated processes and their link to climate. 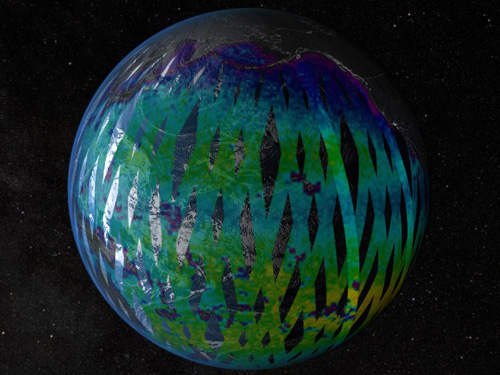 Simulated ocean salinity data for NASA's Aquarius instrument. Aquarius, launching this June aboard the international Aquarius/SAC-D observatory, will map the salinity of the surface of the global ice-free ocean every seven days for at least three years, providing data on a key missing variable in Earth satellite studies that links ocean circulation, the water cycle and climate. Image credit: NASA

Recent studies have shown Earth’s water cycle is speeding up in response to climate change, which affects global precipitation patterns. Currently, scientists study the water cycle by making inferences from measurements of how much water is discharged from rivers and by measuring precipitation and evaporation rates using satellites like NASA’s Tropical Rainfall Measuring Mission.

“About 80 percent of Earth’s water cycle takes place over the ocean,” said Aquarius Principal Investigator Gary Lagerloef of Earth & Space Research, Seattle. “By measuring ocean surface salinity, Aquarius will be able to track how the water cycle is changing in response to climate change.”

Salinity and the Deep Blue Sea

While surface winds drive currents in the upper ocean, deep below the surface, it’s a different story. There, ocean circulation is dominated by changes in the density of seawater. These changes are determined by salinity and temperature. The saltier and colder the water, the more dense it is. In parts of the world, cool, high-salinity surface waters become so dense that they sink to great depths, where they become part of deep ocean currents. Found in all ocean basins, these deep currents are interconnected and play an important role in regulating Earth’s climate by transporting heat globally.

By revealing changes in patterns of global precipitation and evaporation and showing how these changes may affect ocean circulation, Aquarius will help improve predictions of future climate trends and short-term climate events, such as El Niño and La Niña.

‘A Spoon of Salt in a Lake’

Such is the challenge faced by the scientists who designed Aquarius. Since ocean surface salinity generally averages just 32 to 37 parts per thousand around the globe, it’s very hard for a satellite to detect its signal. The salinity differences between El Niño and La Niña are very small – only about one part per thousand.

Aquarius employs new technologies to be able to detect changes in ocean surface salinity as small as about two parts in 10,000, equivalent to about one-eighth of a teaspoon of salt in a gallon of water. Its unique, advanced design combines three radiometers, which measure the salinity signal, with a scatterometer that compensates for the effects of ocean surface “roughness” (waves). The result is expected to be the most accurate salinity data ever measured from space.

Scientists will combine Aquarius’ maps of global ocean surface salinity with in-ocean salinity measurements to generate routine maps of ocean salinity distribution. Later in the mission, Aquarius data will be inter-calibrated and combined with complementary data from the European Soil Moisture and Ocean Salinity satellite.

Peering Into a Crystal Ball (of Salt)

Scientists believe Aquarius will lead to exciting and unexpected new discoveries – a “mind’s true liberation” of sorts. They will be able to accurately calculate the rate at which surface ocean circulation transports freshwater. They’ll see how salinity is affected by melting ice, freshwater flowing into the ocean, and fluxes of freshwater to and from the atmosphere from rainfall and evaporation. They’ll be able to better study how ocean waters mix vertically. And they’ll greatly reduce uncertainties in calculating the ocean’s freshwater budget (the net difference between freshwater lost in the ocean through evaporation and freshwater added to the ocean by precipitation and runoff).

Other areas of particular interest to Aquarius researchers include:

• The Central North Atlantic, where salinity has been observed to be increasing, and the region has been getting more arid
• The Nordic and Labrador Seas, where dense water forms at the surface and sinks to deep layers in the ocean. Aquarius should be able to observe the year-to-year effects of ice melting on the circulation between Greenland and Iceland.
• The Indian Ocean and Bay of Bengal, which have a very large salinity signal but have been less frequently measured than the Atlantic and Pacific oceans

And then there’s the Arctic Ocean, which has seen significant changes in sea ice cover in recent years. Aquarius will provide some salinity measurements over the Arctic during its ice-free seasons, though the Aquarius signal is less sensitive over cold water.

Aquarius’ prime mission will last at least three years, long enough to map year-to-year variations in salinity that will allow researchers to develop the methodology for and demonstrate the usefulness of salinity as a climate data record.

Aquarius data will eventually be used to improve the accuracy of climate forecast models. Ocean surface salinity is not currently well represented in models used by the United Nations’ Intergovernmental Panel on Climate Change in its assessment reports.

Lagerloef likened Aquarius to an explorer of an unexplored frontier. “We’ll see the ocean in a whole different light. When the first Earth science satellites launched in the 1970s, we saw ocean eddies for the first time and got our first glimpse of the tremendous turbulence of the ocean. With Aquarius, we’re going to see things we don’t currently see. It’s as though the blinders will be removed from our eyes.”