CORVALLIS, Ore. — Barred owls may be more abundant in coniferous forests of the Pacific Northwest than previously recognized, according to research published today in the Journal of Wildlife Management.

This finding likely has implications for the recovery of the federally threatened northern spotted owl. Related studies about the competitive interactions between barred owls and spotted owls are under way, with results anticipated this summer.

The research published today also emphasizes the need for species-specific survey methods to document and understand the interactions between the northern spotted owl and its close relative, the barred owl. Barred owls, which have gradually expanded their range into the Pacific Northwest over the past 30 years, are now thought to be competing with dwindling numbers of spotted owls for critical resources such as food and nesting habitat 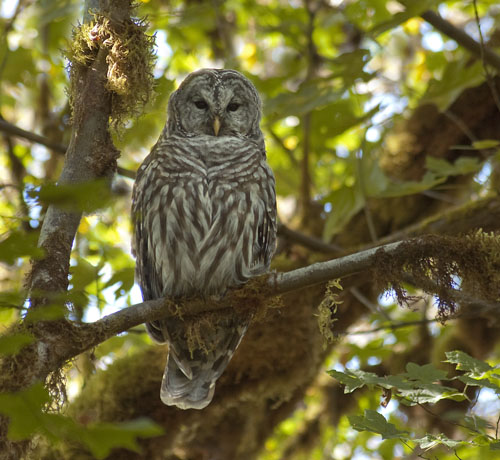 “We wanted to study the competitive interactions between these two owl species, but before we could do that, we needed to be certain we were using survey methods that worked equally well for both species,” said David Wiens, a USGS scientist and the lead author of the study. “By using methods specifically designed for barred owls, we were able to more accurately assess the occurrence and distribution of barred owls over an extensive forested landscape.”

Wiens and his coauthors also found that barred owls were most likely to be found in the structurally diverse forests of mature and old trees that are almost entirely limited to public lands. “This raises the ecological value of these forests because they are also important habitat for spotted owls, marbled murrelets, flying squirrels, red tree voles and many other species that are associated with older forest conditions,” Wiens said.

According to U.S. Forest Service scientist Eric Forsman, another author of the study, public land managers will be increasingly challenged by the objectives of managing spotted owl habitat while accounting for the effects of a widespread competitor like the barred owl. Said Forsman: “Habitat requirements are more critical than ever when you have two species that are closely related, occur in the same areas, and likely are competing for food and space.”

Wiens was an Oregon State University doctoral student during this study. The USGS has been the leader and major sponsor of this and a related 4-year research project in western Oregon to investigate competitive interactions between spotted owls and barred owls. The project has received additional funding and guidance from the U.S. Fish and Wildlife Service, National Park Service, U.S. Forest Service, Bureau of Land Management, Oregon State Department of Forestry, Oregon State University and Boise State University.

This publication appears in the April 2011 issue of the Journal of Wildlife Management. The title is “Barred owl occupancy surveys within the range of the northern spotted owl” by J. David Wiens, Robert G. Anthony, and Eric D. Forsman.