Winter Ski & Ride app for Windows Phone helps you plan ultimate outings, keep track of your friends on the slopes, and beat your personal best.

REDMOND, Wash. – Winter Ski & Ride, a new Windows Phone app in the Nokia Collection, is taking skiing and snowboarding to a new altitude.

Say you’re riding a ski lift to the top of a snow-covered mountain, be it in Colorado, Canada or China. You touch the screen of your Nokia device, with frosty, gloved hands, and pass the lift time by looking at your stats. How many runs have you done? What was your top speed? You look at your contacts, and note what friends are still on the mountain. You decide to ski a mogul-heavy double black diamond run next, and watch a short video by a professional instructor to brush up on your bump skills.

Snow sports plus technology equals an unparalleled experience on the mountain, said Kevin Ashley, a senior technical evangelist for Microsoft’s Windows Phone team who created the app with the help of a Silicon Valley startup. As a professional ski instructor, Ashley couldn’t find a ski and snowboard app that met his own high standards, so he decided to make one.

“None of the other apps out there quite made it to being the ultimate for skiers and snowboarders. This is my attempt to change that, and to change the snow sports industry – to turn it around completely,” Ashley said. “We did hundreds of tests and did a lot of thinking to make this design happen. With this app, Windows Phone 8 and Nokia are now the cool kids on the mountain.” 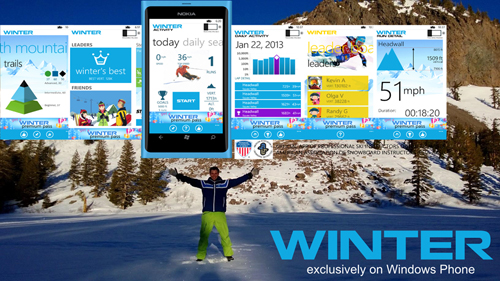 The Winter Ski & Ride app for Windows Phone gives skiers a wide range of new ways to get more from their favorite sport. Image credit: Microsoft

Winter Ski & Ride has a flurry of helpful features for skiers and snowboarders, including ski analytics (speed, duration, vertical drop), “zoomable” resort maps for thousands of resorts, snow reports, activity tracking and goal-setting, a social network, leaderboards, and lessons (skiing, snowboarding, telemark, freestyle and cross-country) from some of the “best instructors on the planet,” Ashley said.

“Our plan is to target this app as a tool,” he said. “It’s not just YouTube videos of guys skiing; it’s the top selected videos from rock stars of the sport. The top ski and snowboard instructors have provided the content for us. Really, it’s taking the sport to the next level.”

In addition, the app is specially designed for elements on the mountain – for use in the bright sun, use by cold or gloved hands, or even voice control rather than touch. The app can also run all day without draining the phone’s battery, Ashley said. 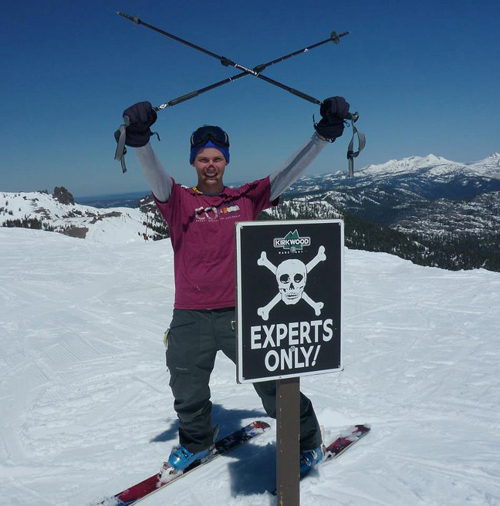 A professional ski instructor, Kevin Ashley couldn’t find a ski and snowboard app that met his standards, so he made one himself with the help of a Silicon Valley startup. Image credit: Microsoft

Ashley said he loves coming into work after a weekend of skiing and using the app to swap stats with his coworkers and to check and make sure he’s still “King of the Mountain” (a distinction given to the app user who has logged the most vertical feet). Turns out Ashley was just ousted by someone named Jochen who tore it up in at the Heavenly Mountain Resort in Lake Tahoe.

The free app has been in the Windows Phone store for about a month, and now has more than 3,000 registered skiers and snowboarders who have used the app at more than 300 resorts worldwide.

The app is endorsed by the Professional Ski Instructors of America and American Association of Snowboard Instructors (PSIA-AASI), which represents more than 30,000 ski and snowboard instructors in the U.S. who teach students one-on-one or manage ski resorts.

The organization’s job is to get people excited about skiing and snowboarding, and the Winter Ski & Ride app contributes to that, said Bill McSherry, director of partnership marketing for the PSIA-AASI. McSherry will help Ashley showcase the app at the organization’s annual conference at Utah’s Snowbird ski resort next month.

“There’s going to be a big reveal, and I think the reaction is going to be very enthusiastic,” McSherry said.

The organization has been long-interested in technology and how it affects the industry, and McSherry said developing a partnership with Nokia and Microsoft will help move that forward more than ever. Both Ashley and McSherry point to upcoming opportunities to give the app international exposure, including the 2014 Winter Olympics in Sochi, Russia, and Interski, an international snow sports conference in Argentina in 2015.

“I haven’t looked at technology in this way before now. This interaction has truly opened my eyes to the dynamic opportunity,” McSherry said. “There are no real limits.”

The app has also been tested and approved by diehard snow-lovers in Utah, California and British Columbia – and by Randy Guthrie, a Microsoft employee in Colorado.

“When you’re in a sport, even if it’s a solo sport like skiing, there is a competitive element. Not with others, but with your own past and trying to get better,” Guthrie said. “Having the ability to compare to yourself and others is really compelling. No other app gives you that.”

Guthrie began skiing about nine years ago when one of his sons got into snowboarding. He was a college professor in California at the time. After being recruited to Microsoft, the family moved to Colorado and now they are all season pass holders to ski resorts, sometimes spending up to 40 days on the mountain per season.

Guthrie met Ashley a few years ago, and saw an early version of his app. Later, Ashley was looking for testers and Guthrie volunteered. Guthrie had been using his own monitoring equipment, including a GPS, and was eager to compare his equipment to the new app. He provided Ashley with feedback and tweaks for some of the features.

“Once, I forgot to turn the app off, and drove off the mountain with it running,” Guthrie said.

The app gave him credit for skiing 65 mph down thousands of vertical feet. Ashley then added an option for users to be able to delete erroneous information.

Guthrie particularly enjoys the social features (he’s currently locked in a fierce battle with a coworker to be King of the Mountain at Breckenridge Ski Resort). As someone who skis at various resorts, he also appreciates that Winter Ski & Ride works everywhere.

“You don’t have to do anything special – it automatically knows what resort you’re at and what run you’re on,” Guthrie said.

The app also lets users put their season standings as their lock screen, so with one glance Guthrie knows that his fastest speed is 44 mph, he’s skied 10 days this season so far (work has been busy), and he’s covered 90,000 vertical feet.

“Every time I turn on my phone, it connects me with this sport that I love. It’s all about community – to me, that makes whatever you do better. The Winter app excels in that aspect,” Guthrie said.

Ashley hopes the app will find success, but he also hopes that over time, Windows Phone and Nokia will be ubiquitous with snow sports.

“I enjoy building apps that bring people to Windows Phone, and I hope we see more apps in the future that take full advantage of this wonderful platform,” Ashley said. “It has all of these beautiful concepts, we just have to take it forward.”