Research by the University of Exeter has revealed that ants have a big impact on their local environment as a result of their activity as ‘ecosystem engineers’ and predators.

The study, published in the Journal of Animal Ecology, found that ants have two distinct effects on their local environment.

Firstly, through moving of soil by nest building activity and by collecting food they affect the level of nutrients in the soil. This can indirectly impact the local populations of many animal groups, from decomposers such as Collembola, to species much higher up the food chain.

Secondly, they prey on a wide range of other animals, including larger prey which can be attacked by vast numbers of ant workers. 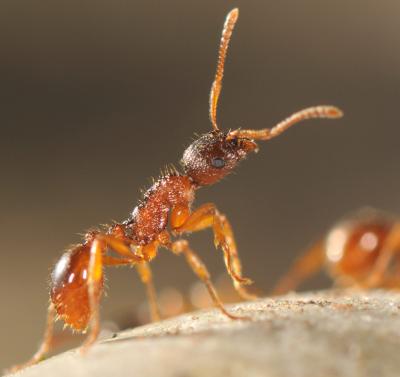 This is a close-up of a common red ant (Myrmica rubra). Image credit: Dirk Sanders

Dirk Sanders, an author of the study from the university’s Centre for Ecology and Conservation, said: “Ants are very effective predators which thrive in huge numbers. They’re also very territorial and very aggressive, defending their resources and territory against other predators. All of this means they have a strong influence on their surrounding area.

“In this research, we studied for the first time how big this impact is and the subtleties of it. What we found is that despite being predators, their presence can also lead to an increase in density and diversity of other animal groups. They genuinely play a key role in the local environment, having a big influence on the grassland food web.”

The study, carried out in Germany, studied the impact of the presence of different combinations and densities of black garden ants (Lasius niger) and common red ants (Myrmica rubra), both species which can be found across Europe, including in the UK.

It found that a low density of ants in an area increased the diversity and density of other animals in the local area, particularly the density of herbivores and decomposers. At higher densities ants had no or the opposite effect, showing that predation is counteracting the positive influence.

Dr Frank van Veen, another author on the study, said: “What we find is that the impact of ants on soil nutrient levels has a positive effect on animal groups at low levels, but as the number of ants increases, their predatory impacts have the bigger effect – thereby counteracting the positive influence via ecosystem engineering.”

This research was financially supported by the German Research Council.