All HIV not created equal: Scientists believe they can identify which viruses cause infection

ANN ARBOR — HIV-infected people carry many different HIV viruses and all have distinct personalities—some much more vengeful and infectious than others.

Yet, despite the breadth of infectivity, roughly 76 percent of HIV infections arise from a single virus. Now, scientists believe they can identify the culprit with very specific measurements of the quantities of a key protein in the HIV virus.

Quantifying this key protein may reveal which of the many viruses present actually caused the infection. 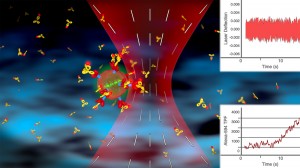 A cartoon showing a single HIV-1 particle being captured by an optical trap delineated by the white lines and red shadows. Image credit: David Brennan (Click image to enlarge)

The University of Michigan study is thought to be the first in which researchers were able to capture HIV at the single-particle level and measure with molecular resolutions, said principal investigator Wei Cheng of the U-M College of Pharmacy. Cheng’s group found that the HIV virus particles have different quantities of a key protein that enables virulence, and the protein-rich virus particles were more infectious than the others.

“There were significant molecular differences in the HIV viral particles—some were very dangerous and infectious, and some were more tame. The virus was very heterogeneous,” Cheng said. “Our technique lets us see differences down to the single molecule level, so if one virus particle differs from another by even one molecule, our instrument can detect that.”

Now that scientists can measure molecular differences in HIV viral particles, there’s a possibility that drugs could be developed to target the molecular features present in the more virulent strains, he said.

Cheng’s lab developed and used a new optical technique, which is outlined in a previous paper, to measure the particles.

To study the HIV viral particles, the U-M team improved upon an already existing tool called optical tweezers, which uses photons, or light, to manipulate tiny molecular motors or nanostructures. This immobilizes the structure and enables contact-free study that doesn’t disturb or distort the structure.

This new U-M optical technique gives rise to a couple different research directions for Cheng’s lab, he said. Scientists can now infect individual cells with single HIV viral particles to determine the particle’s virulence. This technique also has the potential for sorting of viruses and application in other deadly viruses. Ultimately, Cheng said they hope to learn which strains of HIV contain the most dangerous viral particles most likely to infect healthy cells.