Researchers from North Carolina State University and the Liverpool School of Tropical Medicine have found that while advanced wood-burning cookstoves can provide benefits to the environment and climate, these benefits are less than expected due to higher emissions measured in the field compared to laboratory settings. The study, conducted in rural Malawi, found that pollutant emissions from these stoves were much higher than was reported in laboratory testing, due in part to how the stoves were being used.

“However, the field measurements of the forced-draft stoves were still almost 10 times higher than the emissions we see from the same stoves when they are tested under controlled, laboratory conditions,” says Andrew Grieshop, an assistant professor of civil, construction and environmental engineering at NC State and corresponding author of a paper describing the work. “This highlights the importance of doing field measurements rather than relying solely on laboratory testing.” 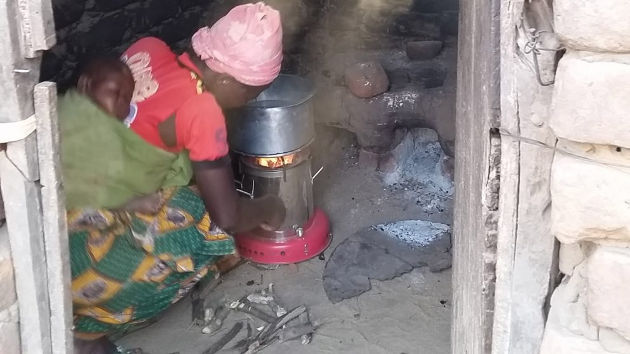 A woman, with sleeping infant on her back, cooking with a forced-draft cookstove in her kitchen in rural Malawi. A traditional cook fire, and the sooty walls that result from its use indoors, are seen in the background. Photo by Andrew Grieshop.

There’s interest in promoting the use of forced-draft, wood-burning cookstoves in the developing world because wood-burning stoves emit black carbon particles and other pollutants that can contribute to both human health problems and global climate change.

“The idea is that these forced-draft stoves, which use battery powered fans to improve combustion, are more efficient than other wood-burning technologies and could significantly reduce pollutant emissions, but there’s been little work to measure those emissions in a real-world setting,” Grieshop explains. “Our study finds that emissions are significantly reduced, but the reductions are not as pronounced as was expected based on lab testing of the technology.”

These findings may also help to explain the results of the recent “Cooking and Pneumonia Study,” which found no effect on childhood pneumonia from providing households with the same forced-draft stoves tested here. One reason for the discrepancy between emission measurements from the field and those from the lab is likely the fact that, in the field, the stoves are often not used in strict accordance with operation guidelines.

“Many households relied on large pieces of wood, such as pieces of logs or tree limbs, that didn’t fit into the stoves as neatly as the small pieces of wood called for by the manufacturers and used for laboratory testing,” Grieshop says. “That’s likely because it takes a lot of work for villagers to chop the wood down to optimal size, and that’s something they may not always have the wherewithal to do.”

Other potential factors include the quality or type of wood available, or the possibility that the patterns of stove use activity in lab testing don’t accurately mimic real-world use.

“This study sheds more light on the complicated challenge of helping people in the developing world reduce their health risks while still enabling them to meet their household energy needs,” Grieshop says. “Having everyone switch to clean technology, like natural gas, would be ideal – but there are a host of practical challenges to implementing that solution on a global scale.

“While we work toward that larger goal, it makes sense to continue research that can help us develop wood-burning technology that can reduce emissions and negative impacts. This will likely involve research that studies the larger system, including the technology, fuel and user.”

The paper, “In-use emissions and estimated impacts of traditional, natural- and forced-draft cookstoves in rural Malawi,” is published in the journal Environmental Science and Technology. Wathore is lead author of the paper, which was co-authored by Dr. Kevin Mortimer of the Liverpool School of Tropical Medicine.