Using a spinning table and a massive garbage can, UCLA geophysicist leads team in simulating the planet’s atmosphere

One mystery has been whether the jets exist only in the planet’s upper atmosphere — much like the Earth’s own jet streams — or whether they plunge into Jupiter’s gaseous interior. If the latter is true, it could reveal clues about the planet’s interior structure and internal dynamics.

Now, UCLA geophysicist Jonathan Aurnou and collaborators in Marseille, France, have simulated Jupiter’s jets in the laboratory for the first time. Their work demonstrates that the winds likely extend thousands of miles below Jupiter’s visible atmosphere.

This research is published online in Nature Physics.

“We can make these features in a computer, but we couldn’t make them happen in a lab,” said Aurnou, a UCLA professor of Earth, planetary and space sciences, who has spent the past decade studying computer models of swirling winds. “If we have a theoretical understanding of a system, we should be able to create an analog model.”

The challenge to re-creating swirling winds in the lab was building a model of a planet with three key attributes believed to be necessary for jets to form: rapid rotation, turbulence and a “curvature effect” that mimics the spherical shape of a planet. Previous attempts to create jets in a lab often failed because researchers couldn’t spin their models fast enough or create enough turbulence, Aurnou said.

The breakthrough for Aurnou’s team was a new piece of laboratory equipment. The researchers used a table built on air bearings that can spin at 120 revolutions per minute and support a load of up to 1,000 kilograms (about 2,200 pounds), meaning that it could spin a large tank of fluid at high speed in a way that mimics Jupiter’s rapid rotation. 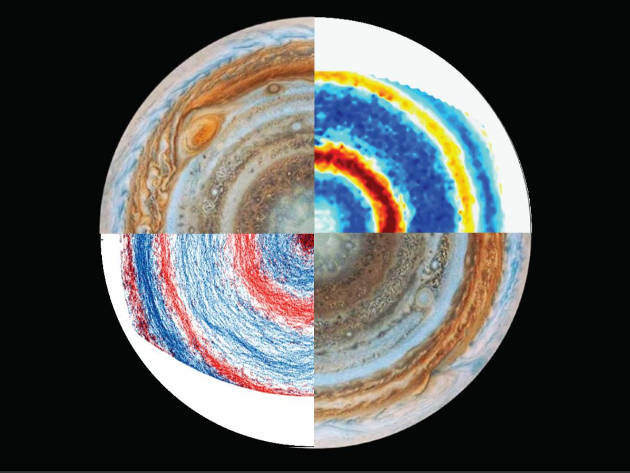 The scientists filled an industrial-sized garbage can with 400 liters (about 105 gallons) of water and placed it on the table. When the container spun, water was thrown against its sides, forming a parabola that approximated the curved surface of Jupiter.

“The faster it went, the better we mimicked the massively strong effects of rotation and curvature that exists on planets,” Aurnou said. But the team found that 75 revolutions per minute was a practical limit: fast enough to force the liquid into a strongly curved shape but slow enough to keep water from spilling out.

While the can was spinning, scientists used a pump below its false floor to circulate water through a series of inlet and outlet holes, which created turbulence — one of the three critical conditions for the experiment. That turbulent energy was channeled into making jets, and within minutes the water flow had changed to six concentric flows moving in alternating directions.

“This is the first time that anyone has demonstrated that strong jets that look like those on Jupiter can develop in a real fluid,” Aurnou said.

The researchers inferred that the jets were deep because they could see them on the surface of the water, even though they had injected turbulence at the bottom.

The researchers are looking forward to testing their predictions with real data from Jupiter, and they won’t have to wait long: NASA’s Juno space probe is orbiting Jupiter right now, collecting data about its atmosphere, magnetic field and interior. Initial results from the Juno mission were presented at the American Geophysical Union meeting in December in San Francisco, and Aurnou was there.

“The Juno data from the very first flyby of Jupiter showed that structures of ammonia gas extended over 60 miles into Jupiter’s interior, which was a big shock to the Juno science team,” Aurnou said. “UCLA researchers will be playing an important role in explaining the data.”

This year, Aurnou and his team will use supercomputers at Argonne National Laboratory in Argonne, Illinois, to simulate the dynamics of Jupiter’s interior and atmosphere. They’ll also continue their work at the laboratory in Marseilles to make the spinning table simulation more complex and more realistic.

One goal is to add a thin, stable layer of fluid on top of the spinning water, which would function like the thin outer layer of Jupiter’s atmosphere that’s responsible for the planet’s weather. The researchers believe this will help them simulate features like Jupiter’s famous Great Red Spot.

The research was funded by the National Science Foundation Geophysics Program, the French Agence Nationale pour la Recherche and the Aix-Marseille University Foundation.