By manipulating the timing of disease-causing mutations in the brains of developing mice, Brown University researchers have found that early genetic deletions in the thalamus may play an important role in course and severity of the developmental disease tuberous sclerosis complex. Findings appear in the journal Neuron.

PROVIDENCE, R.I. [Brown University] — Doctors often diagnose tuberous sclerosis complex (TSC) based on the abnormal growths the genetic disease causes in organs around the body. Those overt anatomical structures, however, belie the microscopic and mysterious neurological differences behind the disease’s troublesome behavioral symptoms: autism, intellectual disabilities, and seizures. In a new study in mice, Brown University researchers highlight a role for a brain region called the thalamus and show that the timing of gene mutation during thalamus development makes a huge difference in the severity of the disease.

TSC can arise in humans and mice alike when both alleles (the one from mom and the one from dad) of the TSC1 gene are deleted. One bad gene is often inherited and the other accumulates a mutation some time during embryonic development. This happens to one in 6,000 people.

“We don’t know when during development the mutations are occurring in the patients,” said Elizabeth Normand, a Brown neuroscience graduate student and lead author of the paper in the journal Neuron. “That’s why we chose to look at the timing. It can give us some insight into the role of genes during embryonic development.”

Normand and adviser Mark Zervas, assistant professor of biology, not only wanted to assess the timing but also to probe the role the thalamus might have in contributing to the neurological symptoms of the disease. To do both, their team genetically engineered a clever mouse model in which they could, with a dose of the drug tamoxifen, delete both alleles exclusively in thalamus neurons at the developmental stage of their choosing.

Their interest in the thalamus comes from its role in forging strong but intricate links to the cortex, which is where most other TSC researchers have focused. As for timing, they tested the effect of controlling allele deletions on day 12 of gestation in some mice and day 18 (just before birth) in others. Still other mice were left healthy as experimental controls.

Overall, the researchers found they could indeed generate TSC-like behavioral symptoms in the mice, such as seizures, by deleting TSC1 alleles in developing cells of the thalamus. They also found that the timing of the deletion mattered tremendously to the extent of the disease in the brain, the degree of abnormality, and the severity of TSC-like symptoms. 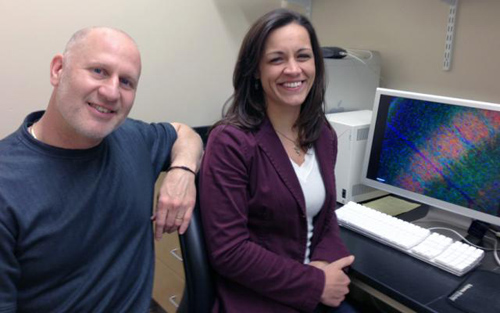 Timing is everything. Mark Zervas and Elizabeth Normand found that the timing of gene mutation during thalamus development makes a huge difference in the severity of tuberous sclerosis complex. Image credit: Brown University

At two months of age, the mice with the embryonic day 12 deletion exhibited excessive self-grooming to the point where they experienced lesions. Among those mice, 10 of 11 experienced seizures at an average rate of more than three per hour.

The mice with the embryonic day 18 deletion, on the other hand, fared better without any over-grooming. By eight months of age, however, four of 17 of the mice did exhibit rare seizures.

“We’re building off the core idea of the thalamus playing an important role in brain function and showing that if you disrupt the way that the thalamic neurons develop that you can get some of these behavioral consequences such as overgrooming or seizures,” said Zervas, who is affiliated with the Brown Institute for Brain Science.

In future work, the team plans to study the effects of deleting the TSC1 allele at other days during development as well as to understand whether there is a threshold of mutant neurons with mTOR disruption at which TSC-like symptoms begin to emerge.

Major support for the paper came from the Department of Defense Congressionally-Directed Medical Research Program (award TS100067 and TS110083). Additional support came from the Brown Institute for Brain Science.