A Wiki for the Biofuels Research Community 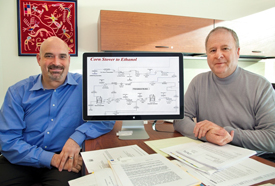 Researchers at the U.S. Department of Energy’s Joint BioEnergy Institute (JBEI) have created a technoeconomic model that should help accelerate the development of a next generation of clean, green biofuels that can compete with gasoline in economics and well as performance. This on-line, wiki-based model enables researchers to pursue the most promising strategies for cost-efficient biorefinery operations by simulating such critical factors as production costs and energy balances under different processing scenarios.

“The high production cost of biofuels has been the main factor limiting their widespread adoption,” says JBEI’s Daniel Klein-Marcuschamer. “We felt that a model of the biorefinery operation that was open, transparent about the assumptions it uses, and updatable by the community of users could aid in guiding research in the direction where it is most likely to reduce the production cost of biofuels.”

Klein-Marcuschamer, a post-doctoral researcher in JBEI’s Deconstruction Division, was the lead author of a paper describing this research that was published in the journal Biomass and Bioenergy. The paper is titled “Technoeconomic analysis of biofuels: A wiki-based platform for lignocellulosic biorefineries.” Other authors were Piotr Oleskowicz-Popiel, Blake Simmons and Harvey Blanch, who was the corresponding author.

Two-thirds of the world’s petroleum resources are now used for transportation. Global warming heads a list of issues creating a need for alternative transportation fuels that are carbon-neutral and can be produced in a sustainable fashion. Studies have consistently shown that biofuels, especially those derived from lignocellulosic biomass, the most abundant organic material on earth, are one of the best alternatives to petroleum if a cost-effective means of commercial production can be found. Hampering this effort has been the lack of effective tools for analyzing the costs of various approaches to biofuels production.

“While there have been earlier models for analyzing the production costs of biofuels that provided invaluable guidance to research, investment and policy endeavors, they usually relied on experimentally-derived or assumed parameters to estimate process performance values,” says corresponding author Blanch, the Chief Science and Technology Officer for JBEI. “As a result, these models could be used to study only a limited set of scenarios, and could not address all possible parameter choices that could be of interest to the biofuels community.” 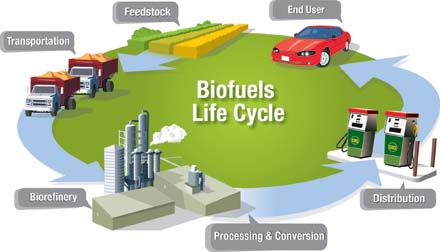 Biofuel offers an alternative to gasoline that is carbon-neutral and can be produced in a sustainable fashion. Image credit: U.S. Department of Energy

Furthermore, Blanch says, although biofuels research is a highly dynamic field, advances made by one group in the field have rarely been considered in the models developed by other groups, primarily because no avenue for such an exchange of information existed.

“Our technoeconomic model provides a common and current  ground for discussion,” says Klein-Marcuschamer.

In the JBEI technoeconomic model, each unit of operation in the biofuels process flow sheet has a dedicated discussion thread, making it possible for experts in different fields to collectively and publicly address issues associated with different sections of the biorefinery. To make the model interactive and dynamic, and to ensure its accuracy, parameters and assumptions will be updated in response to feedback obtained from users in the biofuels research community.

“The goal is to provide a tool that incorporates assumptions in a transparent manner, and allows comparative analyses to be made from the same starting point,” says co-author Simmons, who heads JBEI’s Deconstruction Division. “Our model is also designed to allow users to analyze the scenarios that are of most interest to them, and to gather meaningful information from experts across disciplines in a centralized model.”

By communicating what parameters are in most need of experimental verification, the JBEI model serves to direct research efforts in the biofuels community. It also serves to disseminate findings across different, and many times unrelated, fields.

Says Klein-Marcuschamer, “Results are shared concomitantly with the model through a free demo version of the model’s software. This allows experts that specialize in different parts of the biofuels process to be aware of conditions prevalent everywhere in the process. The model will also give a systems perspective to those who are used to working in specialized fields, such as plant biology, strain engineering, etc.”

The initial JBEI technoeconomic model is formulated to simulate a lignocellulosic ethanol biorefinery that uses corn stover feedstock. Model input factors include the cost of transporting the stover to a refinery, the use of acid pre-treatments to break down lignin and enzymes to break down cellulose into simples sugars, and the fermentation of these simple sugars into ethanol using yeast. From such inputs, users can calculate the resulting energy and greenhouse gas output.

By varying input values, users can test the effectiveness of different processing strategies. In their paper, for example, the authors evaluated the economic performance of lignocellulosic ethanol processing under several different scenarios, including reducing the content of lignin and yeast-toxic acetic acid in the stover feedstock, increasing cellulolytic enzyme activity, increasing the rate of xylose fermentation by yeast, and increasing the tolerance of yeast to acetic acid and ethanol.

The JBEI team is already at work adapting their technoeconomic model to other feedstocks in addition to corn stover, and to the refining of other lignocellulosic biofuels in addition to ethanol.

“We’re open to collaborating with other groups to adapt the model to other fuels and processing technologies,” says Klein-Marcuschamer. “We also expect independent users to devise their own adaptations to the model.”

This research was primarily supported by the U.S. Department of Energy’s Office of Science through a contract with the Lawrence Berkeley National Laboratory (Berkeley Lab). Additional support was provided through the DOE’s Office of Energy Efficiency and Renewable Energy, and through Statoil, Boeing and General Motors.

JBEI is one of three Bioenergy Research Centers funded by the U.S. Department of Energy to advance the development of the next generation of biofuels. It is a scientific partnership led by Berkeley Lab and including the Sandia National Laboratories, the University of California (UC) campuses of Berkeley and Davis, the Carnegie Institution for Science, and the Lawrence Livermore National Laboratory.