A Sing-Song Way to a Cure for Speech Disorder

COLUMBIA, Mo. – Hindustani singing, a North Indian traditional style of singing, and classical singing, such as the music of Puccini, Mozart and Wagner, vary greatly in technique and sound. Now, speech-language pathology researchers at the University of Missouri are comparing the two styles in hopes of finding a treatment for laryngeal tremors, a vocal disorder associated with many neurological disorders that can result in severe communication difficulties.

Nandhu Radhakrishnan, professor of communication science and disorders in the School of Health Professions, is comparing two vocal styles in hopes of finding a treatment for laryngeal tremors, a vocal disorder associated with many neurological disorders.

Sound is developed in the larynx, an organ located in the neck. A laryngeal or vocal tremor occurs when the larynx spasms during speech, creating a breathy voice featuring a constantly shifting pitch. People with Parkinson’s disease and other similar disorders often display vocal tremors. Currently, speech-language pathologists are only able to help patients manage tremors. By understanding the physiology behind voluntary and involuntary pitch fluctuation, an MU researcher hopes to find a treatment.

“Hindustani and classical singing styles are very different,” said Nandhu Radhakrishnan, professor of communication science and disorders in the School of Health Professions. “In Hindustani singing, performers use ‘Taan’ to modulate pitch voluntarily, while classical singers use vibrato to vary pitch involuntarily. With this knowledge, we may be able to develop a specific therapy to cure laryngeal tremors.” 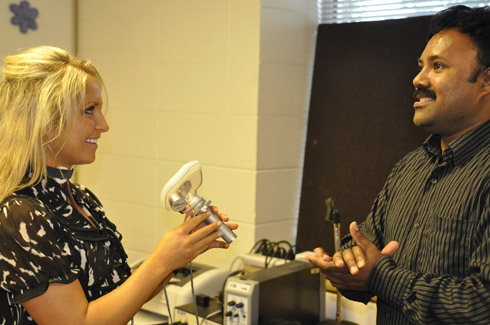 Radhakrishnan is the first researcher to study the physiology of Hindustani singing. He worked with Ronald Scherer of Bowling Green State University in Ohio, and Santanu Bandyopadhyay, a vocal teacher in West Bengal, India. In his study, he discovered several differences between Hindustani and classical singing. Primarily, Hindustani singing features a voluntary, rapid dip in pitch, which Radhakrishnan refers to as a “Taan gesture.” In contrast, classical singers use a vocal modulation like vibrato to make a smooth transition between pitches.

A Sing-Song Way to a Cure for Speech Disorder from MU News Bureau on Vimeo.

Classical singers use what is known as a singer’s formant to enhance a specific range of frequency that will be pleasing to the ear by lowering their larynx and widening the vocal tract. However, Hindustani singers do not use a singer’s formant. Without this, Hindustani singers perform at a much lower volume than classical singers, and their singing voice sounds very similar to their speaking voice. Radhakrishnan also observed that Hindustani singing requires precise pronunciation of lyrics, whereas notes guide pronunciation in classical music.

To uncover the secrets of Hindustani singing, Radhakrishnan recorded a traditional Indian singing teacher repeatedly performing a single Taan gesture. Although singers usually perform several of these pitch fluctuations in succession, Radhakrishnan recorded just one gesture to isolate the technique for scientific study. Radhadrishnan used equipment that measures variables like lung pressure, the duration that vocal folds are open and closed, and the rate at which air is flowing out of the larynx.

The study was published recently in the Journal of Voice. In the coming months, Radhakrishnan will publish another study on Taan gestures that focuses on performance aspects of the technique.