For 20 years, the international community has been unable to agree on a coordinated way to reduce greenhouse gas emissions. J. Timmons Roberts, the Ittleson Professor of Environmental Studies and Sociology, has co-authored a four-step compromise toward emissions reduction that offers “effectiveness, feasibility, and fairness.”

PROVIDENCE, R.I. [Brown University] — Climate change is an issue of urgent international importance, but for 20 years, the international community has been unable to agree on a coordinated way to reduce greenhouse gas emissions. In a “Perspective” piece published in the June issue of Nature Climate Change, J. Timmons Roberts, the Ittleson Professor of Environmental Studies and Sociology, proposes a four-step compromise toward emissions reduction that offers “effectiveness, feasibility, and fairness.”

Their proposal comes as another major United Nations meeting on climage change approaches.

“We face a major deadline in December of 2015 for a deal to be agreed on by the parties of the global United Nations Framework Convention on Climate Change,” Roberts said. “Either to get things moving toward that meeting or as a way to adequately address the issue afterward, this approach is practical, fresh, and fair.” 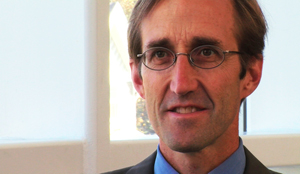 J. Timmons Roberts. “Some of the steps have been proposed, but what’s new here is the combination of elements in a way that has the genuine ability to coalesce interests of the key players who have blocked action in the past.” Image credit: Brown University

Roberts’ proposal, which he co-authored with Marco Grasso of the Universitá Milano-Bicocca, is made up of four core elements for sharing the burden of carbon reductions. Their analysis is based on a carbon budget of 420 gigatonnes of carbon dioxide over the period 2012-50.

A successful approach, they write, must take into account both developing and developed countries without penalizing any economies disproportionately, while also proposing an equitable way to share the burden of emissions reductions.

“Some of the steps have been proposed, but what’s new here is the combination of elements in a way that has the genuine ability to coalesce interests of the key players who have blocked action in the past,” Roberts said.

The first factor Grasso and Roberts propose is reducing the number of actors involved in the initial reductions process from the 194 involved in U.N. negotiations to the 13 members of the Major Economies Forum (MEF) that are the largest emitters in the world. The list includes both developed and developing countries with the United States, European Union, and China at the top. Together, the 13 members on the proposed list contribute 81.3 percent of global cumulative emissions.

Grasso and Roberts suggest that limiting the participants in this initial effort will allow the group to agree an a path forward, which has been elusive during two decades of negotiation. Such a deal will have maximum impact due to the members’ size and global leverage. Trade benefits, such as promotion of trade and investment in climate-friendly technologies and renewable energies, would motivate MEF members to take the lead in emissions abatements, they write.

Second, the authors suggest switching from production-based to consumption-based carbon accounting. The latter, they write, is considered a fairer system that measures emissions from the final use of goods and services. Production-based emissions accounting, the currently accepted system, can penalize economies where carbon-intensive stages in globalized production chains take place and force countries to send those production processes off-shore, a step known as “carbon leakage.” While this system will cause some members to have a higher emissions abatement burden than with the previous system, for the most part consumption-based accounting does not disproportionately penalize any one member, the authors write.

The third element in the proposed compromise is a redistribution of the burden of carbon emissions reductions based on MEF members’ responsibility for climtate change and capability. Previous concepts of responsibility and capability pitted developing, newly industrialized countries against developed countries that had historically greater contributions to global emissions. Grasso and Roberts propose a model that would bring developing, relatively low-responsiblity countries into the decision-making process while also calling for accounting for emissions retroactively to 1990, a concession to those developing countries that have long called for accounting based on historical responsibility. They suggest calculating the economic responsibility of shares of the carbon budget based on the economies of members.

Lastly, Grasso and Roberts call for bringing these changes back to the larger U.N. group to address the other 19 percent of emissions and to be inclusive of the rest of the world. They propose that richer countries provide transitional assistance to others in the form of tools, methodologies, training, and knowledge.

The authors explain how compromise, rather than competition, will benefit all involved.

“Each MEF member would gain and lose something in our proposed framework,” Grasso and Roberts conclude. “They all would have to relax some of their hardline positions, otherwise a meaningful outcome will not be achievable. By so doing, all countries will gain a liveable future, the core principle of national security.”