A New Tool to Attack the Mysteries of High-Temperature Superconductivity

Superconductivity, in which electric current flows without resistance, promises huge energy savings – from low-voltage electric grids with no transmission losses, superefficient motors and generators, and myriad other schemes. But such everyday applications still lie in the future, because conventional superconductivity in metals can’t do the job.

Now a team of scientists at the U.S. Department of Energy’s Lawrence Berkeley National Laboratory (Berkeley Lab) and the University of California at Berkeley, led by Alessandra Lanzara in collaboration with Joseph Orenstein and Dung-Hai Lee of the Lab’s Materials Sciences Division (MSD), has used a new and uniquely powerful tool to attack some of the biggest obstacles to understanding the electronic states of high-temperature superconductors – and how they may eventually be put to practical use. The team reports their research using ultrafast laser ARPES (ultrafast angle-resolved photoemission spectroscopy) in the June 1, 2012, issue of the journal Science. 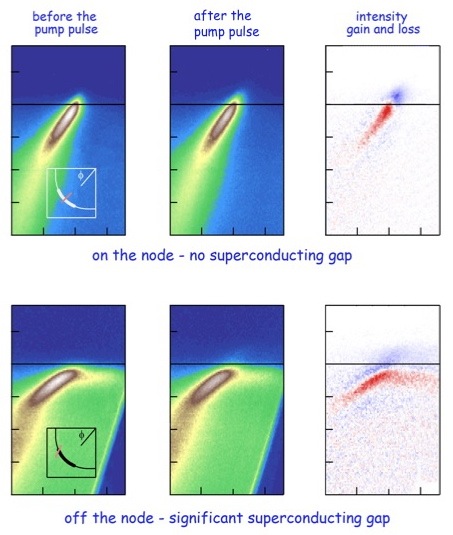 Part of the momentum map of Bi2212 derived from ultrafast laser ARPES shows that after initial excitation by a pump probe, how fast quasiparticles recombine into Cooper pairs greatly depends on their position in momentum space. (Only one of the four corners of the Fermi surface momentum map is shown, as insets in left panels.) Near the central nodes the quasiparticles recombine very slowly. Far from the nodes, they recombine quickly. Image credit: Berkeley Lab

Pairing off the electrons

Cooper pairs of electrons are the hallmark of superconductivity, forming a sea of correlated charge carriers that barely interact with their crystalline surroundings. The formation of these pairs in conventional superconductors is well described by the Bardeen Cooper Schrieffer (BCS) theory. With high-Tc superconductors, however, the situation is not straightforward.

“The mechanism binding Cooper pairs together in high-Tc superconductors is one of the great mysteries in materials science,” says Christopher Smallwood, a member of Lanzara’s group and first author of the Science paper. “What we’ve done with ultrafast laser ARPES is to start with a high-Tc superconductor called Bi2212 and cool it to well below the critical temperature where it becomes superconducting.”

The researchers fired an infrared laser pulse at the sample, temporarily cracking some of the Cooper pairs open into their constituent parts, called quasiparticles. As these states decayed, recombining back into Cooper pairs, the researchers used ARPES to measure their changing energy and momentum.

“The relaxation process takes just a few trillionths of a second from start to finish, and in the end, we were able to assemble and watch an extremely slow-motion movie of Cooper-pair formation – which showed that the quasiparticles tend to recombine faster or slower depending both on their momentum and on the intensity of the pump pulse,” Smallwood says. “It’s an exciting development, because these trends may be directly connected to the mechanism holding Cooper pairs together.” 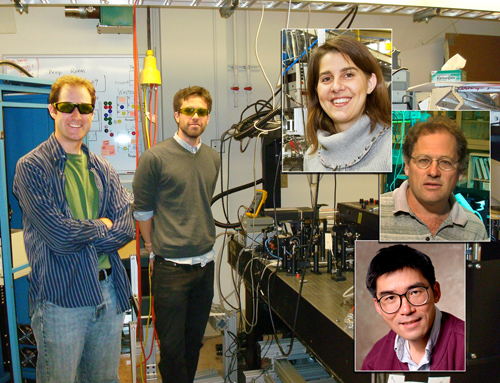 A Cooper pair has less energy than two independent electrons, leaving an energy gap between the sea of Cooper pairs and the usual lowest energy of the charge carriers in the material. Maps of this superconducting gap can be calculated – or, remarkably, they can be drawn directly by the charge carriers themselves.

In an ARPES experiment, the momenta and angles of the electrons that are knocked loose by a sufficiently energetic beam of light are used to map out the material’s momentum space on a flat detector screen. The momentum-space map shows the material’s band structure, the energy levels accessible to its charge carriers.

Long used to probe the electronic structures of materials, ARPES is usually associated with synchrotron light sources like Berkeley Lab’s Advanced Light Source (ALS), which produces extremely bright beams of x-rays. Laser ARPES is much simpler but limited in energy.

“We’re stuck with 5.9 electron-volt photon energy and we can’t tune it much, like we could at the ALS,” Smallwood says. “But by happenstance this energy is great for looking at high-Tc superconductors, and the low photon energy gives us better momentum resolution.”

“This is where ultrafast laser ARPES, which is only about five years old, really comes into play to give us results not accessible by other means,” Smallwood says. “The laser we use is a titanium-sapphire laser that can emit femtosecond-scale pulses.” (A femtosecond is a quadrillionth of a second.)

The same beam pulse that creates the infrared pump pulse is split to form the more energetic ultraviolet probe pulse, by passing part of it through frequency doubling crystals. The time delay between pump and probe can be adjusted with femtosecond precision, using a motorized mirror to change the distance the probe pulse travels before it reaches the sample. The tiny sample can be tilted to any desired angle, which determines what part of the band structure is being examined by ARPES.

When additional ultrafast all-optical techniques, using infrared for both pump and probe pulses, were applied to the same sample, the results were in good agreement with ARPES.

“It’s exciting that now we are able to measure these components of recombination distinctly and see what each contributes,” says Smallwood. “It gives us a new handle on ways to assess some of the candidate ideas about how Cooper pairs form, such as the suggestion that the energy and momenta of quasiparticles far from a node may resonate with waves of spin density or charge density to form Cooper pairs. We’ve shown the way to measure this and other ideas to see if they play a significant role in the transition to high-temperature superconductivity.”